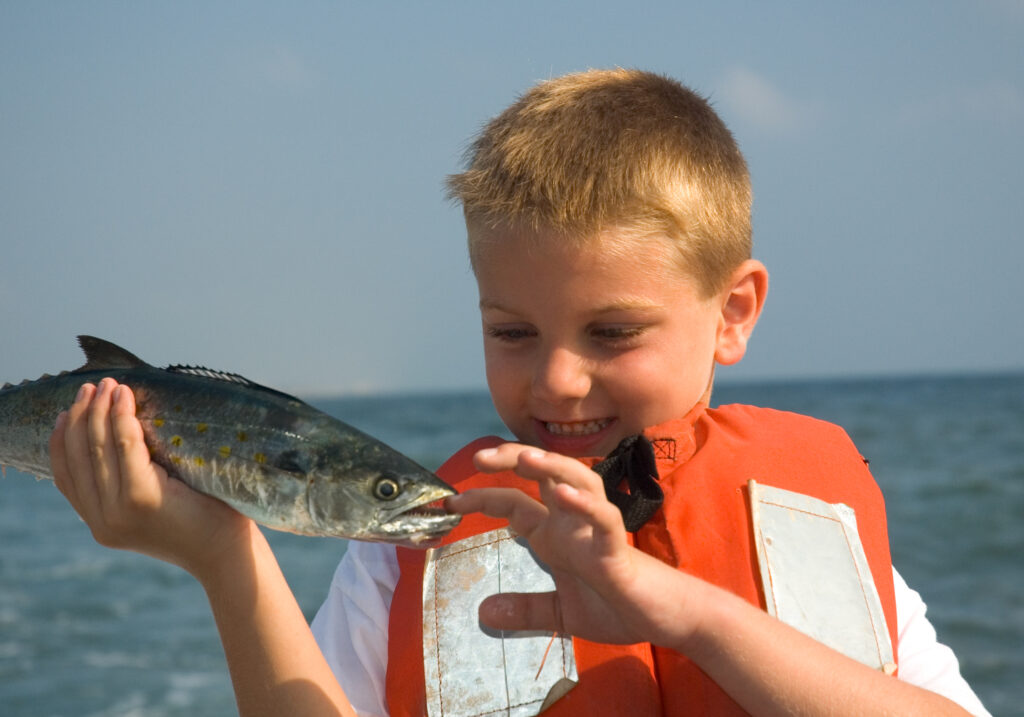 Spanish Mackerel are aggressive, opportunistic carnivores that will readily hit baits or artificial lures and provide an exciting fight with many high-speed runs and jumps.

Spanish Mackerel (Scomberomorus maculatus)
(Florida Record 12lbs.) Spanish Mackerel are medium-sized fish that are important as a major commercial and sportfish species worldwide. They have a long, narrow body that tapers at the head and tail. The snout is pointed and shorter than the rest of the head, and the fish has two closely spaced dorsal fins and a sickle-shaped tail fin. The body is covered with small silvery scales, and is iridescent blue-green along the back, with silver sides that have approximately three rows of large dark brown and brassy spots. The number of spots increases with the size of the Mackerel.

Spanish Mackerel commonly reach 8 to 11lbs. in weight, and the maximum length for this species is about 36 inches. Juvenile fish grow rapidly then slow around the age of 5 for males and 6 for females. The longest life spans for Spanish Mackerels were 11 years for females and 10 years for males, with females growing larger than males.

Spanish Mackerel Habitat and Behavior
Spanish Mackerel are found in subtropical and tropical waters along the western Atlantic coast. They range from Nova Scotia Canada south to Florida and throughout the Gulf of Mexico to the Yucatan Peninsula, with the greatest abundance occurring in Florida waters. They migrate long distances, staying close to shore and following the coastline north in the summer and back south in the winter. Separate populations migrate westward through the Gulf of Mexico in the early spring to waters off Texas. Spanish Mackerel frequent barrier islands and passes, and rarely enter low salinity waters.

The Spanish Mackerel is an epipelagic fish, preferring shallow depths of 33 to 115 feet, and often found in large schools near the surface. In Florida waters, Spanish Mackerel are found inshore, nearshore, and offshore, often over grass beds and reefs. They are absent from north Florida waters in winter. Like other Mackerel species, Spanish Mackerel feed mainly on small baitfish like herrings, jacks, and sardines, and to a lesser degree on shrimp and squid. Populations along the coast from North Carolina to Florida and in the Gulf of Mexico depend especially on alewives, anchovies, menhaden, and thread herring, with juveniles consuming a higher percentage of anchovies than adults.

Spanish Mackerel reach maturity at about 1 year old and 14 inches in length. Spawning takes place at different times depending on the latitude. In the more northern portion of its range, the Spanish Mackerel spawns from August through September, while in Florida waters, spawning typically occurs from July through September. Spanish Mackerel produce milt and roe during reproduction, broadcasting it into the water column where fertilization occurs. The eggs hatch within 25 hours in water temperatures of 79F. The larvae feed on other larval fishes as well as some crustaceans, and live mostly offshore. Juveniles often utilize estuaries as nursery areas, and can be found both offshore and in the beach surf.

What to expect fishing for Spanish Mackerel
Spanish mackerel are highly valued by recreational anglers throughout their range. Fishermen target Spanish Mackerel from boats, piers, jetties, and beaches. Trolling, drifting, casting spoons and jigs, and live-bait fishing are all effective with this species. Around Key West, Spanish Mackerel are found on the patch reefs in the Atlantic and the Gulf, and in the basins and channels around the lower Keys. Large flocks of birds are a good indicator of feeding Mackerels. When a feeding school is located, any type of flashy spoon or top water plug that moves erratically when retrieved at high speeds will draw reactive strikes from this voracious fish.