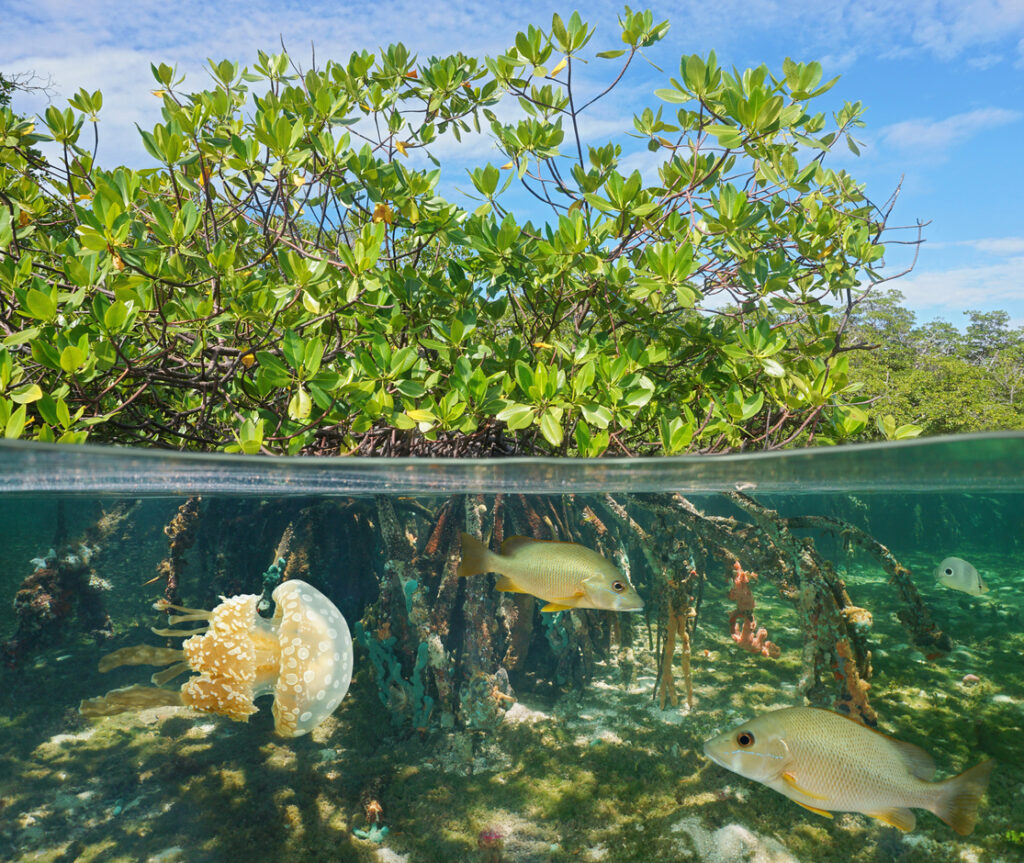 Common throughout the Keys, the Gray Snapper, also known as the Mangrove Snapper or Mango, is a family favorite on Key West fishing trips. Abundant, easy to catch, and good to eat, they can be found both inshore and offshore. Once a school of Gray Snapper is located or chummed to the boat, the action is usually fast and steady until everyone limits out. They are fun fish on light tackle, and many kids got their introduction to fishing in Key West by hauling in feisty Gray Snapper. (Florida Record: 17lbs)

The Gray Snapper has a relatively deep and slender body, with a pointed snout and a broad, mildly-forked tail. The fish has a large mouth, with two conspicuous canine teeth present at the front of the upper jaw. The Gray Snapper varies in overall color, especially in juvenile fish, but the usual coloration of the body and fins is gray to green with a pink or reddish cast on the lower sides. It can quickly change color from a coppery to a brighter red tint. Young fish have a prominent dark stripe running from the snout through the eye.

The Gray Snapper is one of the smaller snappers, and rarely grows more than 18 inches in length, usually weighing less than10lbs. Maximum size is about 24 inches and 10lbs. Gary Snapper caught offshore typically weigh 8-10lbs., while fish in shallow inshore water run about 2-6lbs. Shallow-water fish will range from 8 to 14 inches, with fish up to 20 inches common in deeper water.

Gray Snapper Habitat and Behavior
The Gray Snapper is found in the coastal and offshore waters of the western Atlantic Ocean from Massachusetts to Bermuda, and southward to Brazil, including the Bahamas, West Indies, the Gulf of Mexico, and Caribbean Sea. One of the most common species of snapper in warmer regions, the Gray Snapper can be found in many habitats from canals to grass flats, as well as in open water, and from very shallow water to depths of 585 feet. Large schools of Gray Snapper can be observed amongst coral reefs, in estuaries, over rocky areas, and around mangrove habitats. The Gray Snapper is very common in Florida, where it is particularly abundant along the coastline.

In open water, Gray Snapper are most commonly found near bottom structure or reefs. Young fish live inshore in a variety of habitats including seagrass beds and soft- and sand-bottom areas, and a number of inshore habitat types are important to the species as nurseries. Both adults and juveniles can tolerate a broad range of salinity levels, and have been found in freshwater lakes and rivers in south Florida.

Gray Snapper reach sexual maturity when they are about 2 years old and 7 to 13 inches long. They spawn in large aggregations during times around the full moon from April to November, with a peak in Florida waters during the summer months. Individual females may spawn multiple times during a spawning season. Gray Snapper are broadcast spawners, with the eggs fertilized at random in the water column and hatching approximately 20 hours later.

The Snapper larvae drift with the currents as plankton for the first month of life until they grow large enough to settle into nursery habitats such as seagrass beds and mangroves. The pre-juvenile and juvenile Snapper feed by day until they grow large enough to move into the shallow rocky areas and coastal reefs where adult fish live. The maximum observed lifespan for the Gray Snapper is 32 years.

Mangrove Snapper are opportunistic predators that feed on crustaceans and small fish. Juveniles feed by day on crustaceans, fish, mollusks, and polychaete worms found among seagrass beds. Adult fish forage nocturnally, preying upon small fishes, crabs, shrimps, clams, snails, octopus, and squid. In the Bahamas, Gray Snapper have been observed near the entrances of Lucayan Caverns waiting under a breeding colony of Buffy Flower Bats for the chance to eat falling bats.

Fishing for Gray Snapper
Gray Snapper can be found almost everywhere around Key West, and often hang out near shore structure such as docks and piers as well as around the fringes of mangroves. In the spring, they gather in large numbers over the Florida Reef south of Key West. They will eat a variety of baits, including minnows, live or frozen shrimp, squid, and occasionally artificial lures or baits. Locating schools over the reef with a fish finder then dropping baits works well. On the grass flats or other areas with minimum structure, chumming the fish into the boat is a common strategy.

Once excited into feeding mode, Gray Snapper can provide fast action, hitting as quickly as bait can be put in the water. To increase the average size of the catch, use large chunks of cut bait such as Ladyfish or Bonito so that small Snapper cannot eat the bait. Gray Snapper are wary fish, with excellent eyesight, and they grow more skittish of baits as they grow larger. As with Yellowtail Snapper, it is important to use the lightest leader and smallest hook possible, but when the right presentation is found, and particularly when they are excited by chum, Gary Snapper will strike boldly and exhibit competitive feeding behavior.

On the deeper reefs and wrecks, larger Gray Snapper will fight with good power and provide a lot of fun on light tackle. With patience and a lot of chum, they can be brought up off the reef and hooked in large numbers. Gray Snapper can also be hunted with a speargun, but they tend to be wary of divers rather than curious. The Gray Snapper is a good table fish, highly prized for its light and flaky meat. The smaller fish are generally considered to have better flavor.