Fishing for Ladyfish in Key West 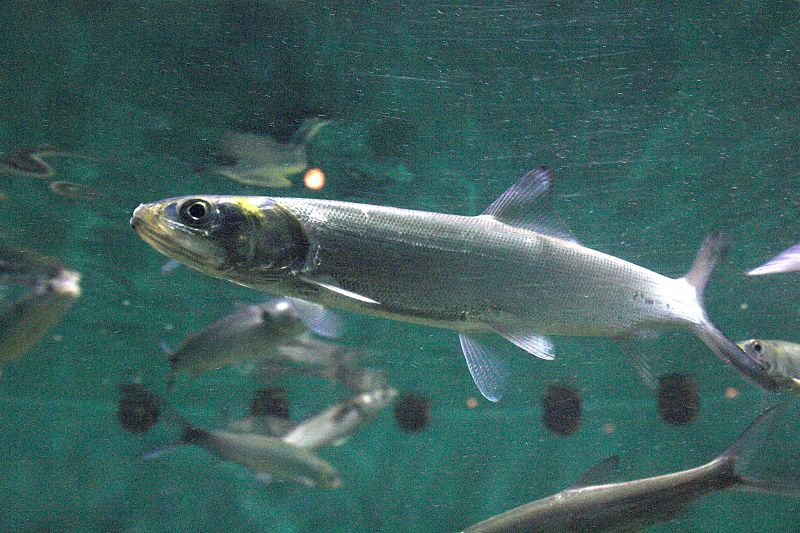 With its elongated, shiny silver body, the Ladyfish resembles a juvenile Tarpon, and it also bites readily, fights well and tends to jump when hooked. Often overlooked because they are not good to eat, Ladyfish are actually a lot of fun to catch and make a great Key West inshore sportfish, especially in their larger 2- to 3-foot sizes. (Florida Record: 6lbs 4oz)

Ladyfish (Elops saurus)
Ladyfish are also known as Skipjack and sometimes called the Poor Man’s Tarpon for their habit of making flashy jumps during the fight. They are long and slender fish, silvery blue to greenish on the back, and bright silver on the sides and belly. Ladyfish resemble juvenile Tarpon in general size, shape, and color. However, the Ladyfish has a rough body covered with small, thin, scales unlike the large, well-defined mirror-like scales on young Tarpon. Ladyfish also lack the distinctive large, upturned mouth of the Tarpon, and their body is oval in cross-section rather than being deep and slab-sided like the Tarpon’s.

The head of the Ladyfish is small and pointed, with large eyes. The mouth is at the front of the head and has rows of tiny sharp teeth. The dorsal fin is the part of the Ladyfish that perhaps bears the most resemblance to Tarpon; it is positioned towards the tail and triangular in shape. The tailfin is long and deeply forked. Dorsal and tail fins may be dusky yellowish to silvery in color. Ladyfish can grow to just over 3 feet long, and the world record weight is currently 8lbs. Typical fish run around 2 to 3lbs.

Ladyfish Habitat and Behavior
Ladyfish are coastal nearshore fish found in the western Atlantic from Cape Cod, Massachusetts through the Caribbean Sea and into the Gulf of Mexico, and south to Brazil. They are tropical and sub-tropical fish that are more common in waters south of North Carolina. The Ladyfish has also been observed in the Indian Ocean and the western Pacific.

The length and age at which Ladyfish reach sexual maturity are unknown, and the eggs and initial yolk-sac larval stages have not been described. Based on researchers’ collection of larvae, the fish is thought to spawn offshore, mainly during the fall months off the coast of Florida. Larvae and juvenile fish have been found inshore in estuarine habitats and along beaches. Like Tarpon and true Eels, Ladyfish larvae go through a leptocephalus stage when they have a long, ribbon-like, colorless, transparent body with large fang-like teeth, a small head, very small fins, and no gills or red blood cells. They absorb oxygen and nutrients from the water, and do not feed at all. The teeth are thought to keep debris out of the mouth.

Ladyfish have a lifespan of at least 6 years, and young Ladyfish undergo dramatic changes in body form during the early stages of growth. They also gradually change diet as they move through growth stages. Juveniles feed on small fish and crustaceans, while adults mainly feed on small bony fish such as menhaden, mullet, and silversides. Ladyfish will eat members of their own species, and invertebrates including decapod crustaceans are also an important part of their diet depending on location.

Ladyfish prefer channels with open water and moderate currents, and can found along mangrove banks, around shallow bars, and in eddies at the bends in rivers. They can live in depths up to 160 feet and are occasionally seen several miles offshore, but can tolerate a wide range of salinity levels and are more typically found in the brackish water of bays and lagoons. Ladyfish will move to grass flats, off beaches, or wherever food is most available.

Fishing for Ladyfish
Ladyfish are known as very fun fish to catch on light tackle. They are plentiful, gather in large schools, and are generally easy to find. Ladyfish will bite aggressively on a wide variety of baits and lures, and they fight with many jumps and fast runs, often skipping along the water surface. They are very bony and not considered to be good eating, but Ladyfish offer fast action that is great for beginning anglers or kids.

Large schools of Ladyfish can often be located by looking for flocks of diving birds. Another strategy is to look for the mud stirred up by feeding Mullet. The Ladyfish will often be nearby hunting the small fish and crustaceans that the Mullet scare up from the bottom. When schools of Ladyfish are feeding, they are chasing small fish, so nearly any lure or bait that looks like prey will be hit.

A 7-foot medium-light spinning rod and a 1500- to 5000-sized spinning reel spooled with 12-15lb clear monofilament is good. The many sharp teeth of the Ladyfish make a length of 30lb mono leader or very light wire necessary. If mono is used, check it for fraying every few fish. Floating or sinking MirrOlures, Clark Spoons, jig heads tipped with shrimp, mud minnows, or any fly that looks like a small shiny fish will get strike after strike when the Ladyfish are feeding.

When a school is found, the best way to fish for them is to keep the boat as far away as possible and cast into the middle of the action. This will avoid spooking the fish and sending them to the bottom. If you are on the beach, look for a school disturbing the surface and cast out to it. Jack Crevalle, Bluefish, Sea Trout, or even Tarpon may sometimes be encountered in a school of Ladyfish, making for a nice surprise catch and a hard fight. Ladyfish are also good bait for Sharks and other large gamefish including Tarpon and Snook.