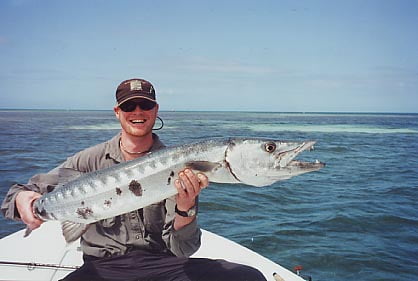 Big, fast, and armed with a mouth full of vicious teeth, the Great Barracuda is one of those awesome catches that make fishing in Key West such an adventure. There is nothing like seeing one of these monsters destroy a surface plug out on the flats, and winching one up from a deep wreck is the fishing event of a lifetime. (Florida Record: 67lbs)

Great Barracuda (Sphyraena barracuda)
The largest of more than 26 different Barracuda species, the Great Barracuda is known to exceed 6 feet in length and weigh over 100lbs. There have been reports of specimens that measured over 9 feet long. Like all Barracuda, the Great Barracuda is an aggressive, dangerous-looking fish with a long, slim body, a large, pointed head, and powerful jaws. It is a deadly missile of the sea: long, slender, pointed at the front, and capable of bursting to 28mph when launching at its prey.

Great Barracuda are silvery dark green to blue-grey, fading to chalky white on the underside. Large specimens have irregular dark blotches along their sides, and some fish have darker stripes along the sides. These can change from light to dark and back as the fish seeks to camouflage itself. Juvenile fish may have a tiger-striped appearance.

The Barracuda’s mouth is large, and the lower jaw juts out beyond the upper. Razor-sharp teeth are set in sockets in the jaws and on the roof of the mouth. Two sets of teeth serve different purposes. An outer row of small teeth is for tearing and shredding prey to pieces while an inner set of large fang-like teeth puncture and hold prey. The long teeth fit into holes in the upper jaw, allowing the fish to fully close its mouth.

Great Barracuda Habitat and Behavior
Great Barracuda are found in tropical and subtropical waters in the Atlantic and Pacific Oceans, the Indian Ocean, and the Red Sea. In the western Atlantic, they are common from Massachusetts to Brazil and throughout the Gulf of Mexico and the Caribbean Sea.

Little is known about the reproduction cycle of the Great Barracuda. Although valued as a sportfish, there has never been a commercial fishery centered on Barracuda, so research data is limited. Great Barracuda reach sexual maturity when they are about 23 inches long. This corresponds to about 2 years of age for males and 4 years for females. Barracuda in the Florida Keys are thought to spawn in spring out in deeper, offshore waters. Male and female release eggs and sperm into the open water, with the female releasing from 5,000 to 30,000 eggs. After hatching, the initially pelagic larvae develop until they can eventually make their way to estuaries and mangrove shallows.

Juvenile fish prefer shallows around mangrove islands, sea grass flats, and coral patches. As the fish mature, they make their way to deeper water, where they prefer large structures such as reefs and wrecks, but will also patrol over sandy bottoms and sea grass flats in search of prey. Great Barracuda are often solitary but can sometimes be found in groups, especially around structure. Large fish are sometimes seen in the open ocean, usually near the surface, but sightings have been recorded down to 325 feet. Great Barracuda have a lifespan of up to 14 years at least, and adults have no predators other than Sharks and sometimes Dolphins.

Great Barracuda are top predators on the reef, and will feed on squid, shrimp, and any fish smaller than themselves including other Barracuda. They feed primarily by sight and rely on bursts of speed to capture prey. Great Barracuda are ambush predators that like to hunt in open water around reefs, wrecks, and other structure. Hanging motionless, hiding in shadows, or concealed among structure, when it spots prey within range, the Barracuda jets out to swallow small fish whole. They hit larger fish in the center, cutting the prey in half then whirling around for two more strikes to swallow the pieces. Barracuda will also follow larger predators and scavenge wounded fish and scraps from the hunt.

Fishing for Great Barracuda
Other than the fact that catching just one or two fish can destroy an expensive lure, the Great Barracuda makes a perfect gamefish. It is an apex predator that readily takes live or cut bait and blasts anything that shines or creates a noisy disturbance. Big Barracuda can strip a reel in seconds with a near-30mph run, and they leap spectacularly when hooked.

Barracuda will hit many types of artificial baits including flies, plugs, and tube baits. Anything that shines and can be retrieved quickly or skipped across the top of the water to imitate the movements of an injured baitfish will get a strike. When that happens, expect to be kept busy trying to keep the fish on as it makes high-speed runs and leaps high to throw the hook. In Key West, every wreck will hold large schools of Barracuda, and the deep waters are the most likely place to encounter a 4-foot plus monster. They will eat anything, but around Key West they prefer live needle fish, mullet, and small Jacks dropped in the water column above the wreck or reef.

Barracuda do hunt on the Flats, and are especially exciting in the shallow water where their dramatic strike is often visible to the fisherman. In the Backcountry, Barracuda can easily be found near the mouths of channels, along channel edges and drop offs, and anywhere that holds baitfish and offers the Great Barracuda an ambush set up. Barracuda are not considered to be a good food fish, and Key West guides promote catch and release fishing to preserve this fun sport fish species.