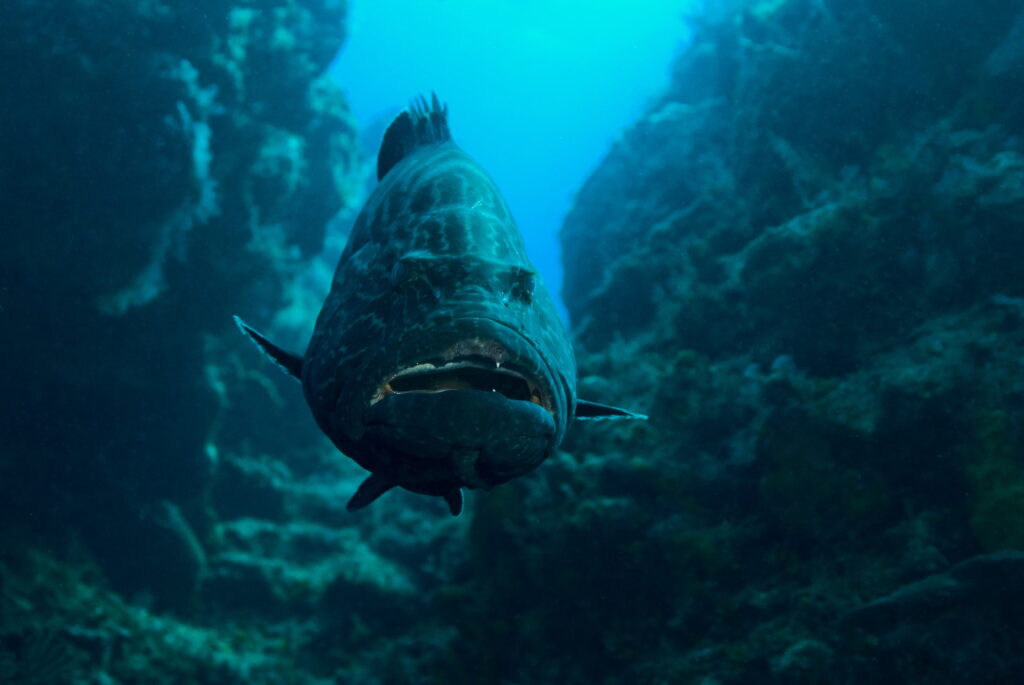 Second in line behind the giant Goliath Grouper as the largest Grouper species in the Keys, the Black Grouper is one of the most popular targets for Grouper fishing in Key West. Powerful fighting strength, large size and weight, and delicious eating in a wide variety of recipes make the Black Grouper a welcome addition to the catch on any Key West fishing expedition. (Florida Record: 113lbs 6ozs)

Black Grouper (Mycteroperca bonaci)
The Black Grouper is a large fish with a beautiful marbled coloration that ranges from an olive to gray base color with dark rectangular blotches and small hexagonal bronze spots on the head and lower sides. The patterns form narrow zigzag lines radiating from the eye and spreading out beyond the gill plates. This coloration is why the fish is called the Marbled Rockfish in some areas of its range. Like most Groupers, the Black Grouper can change color to some degree, and are found with varying color patterns according to their environment.

Black Grouper are large fish, and most that are caught average a little over 2 feet in length. They can grow up to 5 feet long and weigh 180 pounds. Most of their growth occurs during the first ten years of life, but they can live over 30 years. The Black Grouper is distinguished from the very similar Gag Grouper (Mycteroperca microlepis) by the bottom of its preopercle, or cheek, which is gently rounded where the Gag has a sharp serrated spur.

Black Grouper Habitat and Behavior
Black Grouper range in the western Atlantic as far north as Massachusetts, and south to southern Brazil, but it is most common in the southern Gulf of Mexico, the Florida Keys, the Bahamas, and throughout the Caribbean. Adult fish are not found in the northernmost portion of the range and juveniles found there are considered to be vagrants. As an important recreational and commercial species, the Black Grouper is intensively managed, and fishing in US waters is regulated with closed seasons, size limits, and bag limits. For management purposes, the population is separated into two stocks, the Gulf of Mexico/South Atlantic and the Caribbean stocks, with the majority of the US stock occurring in the Florida Keys.

Black Grouper are found in areas with irregular bottoms such as coral reefs, drop-off walls, and rocky ledges in depths from 10 to over 300 feet. In the eastern Gulf of Mexico and around Key West, large adults are usually found in waters over 100 feet deep. Black Grouper prefer heavy structure that can offer shelter to fish of their size. Juveniles can be found in shallow water, and live among seagrass beds and around patch reefs in the Keys.

Although they have been observed to form seasonal feeding aggregations along the continental shelf of Brazil during the spawning seasons of prey fish, Black Grouper are generally solitary until they form spawning aggregations. Research shows that Black Grouper are sexually active year-round. Spawning has been reported to occur off the Yucatan Peninsula between December and March, with a peak in January and February, while in the Gulf and South Atlantic spawning occurs May through August. The fish usually spawn from the full moon to several days after the new moon.

As with other members of the Grouper family, Black Grouper are protogynous hermaphrodites, with all fish born as females and about 50% of fish changing to male. Sex change occurs at around 15 years of age when fish reach 39 to 48 inches in length. During courtship activities, males show a white head coloration and females a dark coloration. Eggs are externally fertilized, often with the pair of fish swimming vertically next to each other while releasing eggs and sperm into the water. The larvae are pelagic, floating with the current until the young fish are large enough to take shelter in seagrass beds and around mangrove fringes.

Black Grouper are slow swimmers and cannot pursue prey over long distances. They prefer an ambush feeding technique, and like to have a hole where they can hide and wait for prey before capturing it by snapping open their mouth and sucking the prey in. The sharp teeth of the Black Grouper are used to hold prey from escaping, not for tearing flesh as with Barracudas and Sharks. Adult Black Grouper feed primarily on octopus, squid, and smaller reef fish including grunts, snapper, and herring. They will also feed on crustaceans such as shrimp, lobsters, and crabs. Juveniles feed on swimming and crawling decapods such as shrimp and crab; they have also been known to eat plant material and small fish.

Fishing for Black Grouper
For all Grouper species, fishing usually involves dropping baits just off the bottom on or near structures such as reefs, wrecks, or rocks. Grouper are plentiful around such structure, and they bite readily when large baits are lowered. Live fish or dead whole or cut bait can be used. Targeting the Black Grouper in particular requires a good knowledge of the fishing grounds and bottom structure as well as the Black Grouper’s habits and movement patterns. A well-presented live bait is ideal for attracting trophy Black Grouper. All varieties of live bait including pinfish, pilchards, and threadfin shad will work.

Groupers of every species are known for their strength when hooked, and the Black is no exception. Black Grouper always live near structure, and a hooked fish will invariably try to head into its shelter and get “rocked up”, making it nearly impossible for the angler to avoid a break-off. With the trend being toward the use of light tackle for a more exciting fight and sporting catch, it takes skill and luck to get a Black Grouper off the bottom and away from structure. Drift fishing can be a useful strategy as the moving boat will tend to pull the fish away from its hole. Using a strong, high-quality leader is also essential to avoid cuts from jagged rocks and sharp coral.

In any case, a Black Grouper of 20 pounds or more will usually be able to get into its hole unless the angler is using heavy gear and has plenty of strength. When a fish does make it into the structure, a common technique is to let the line go slack, which may cause the fish to eventually emerge back into open water where it can be fought. Larger fish frequent deeper waters, and hooking one of these brutes will result in a serious battle. A successful fisherman can look forward to a tasty reward with the Black Grouper because it is considered by many to make the best eating of any Grouper species.