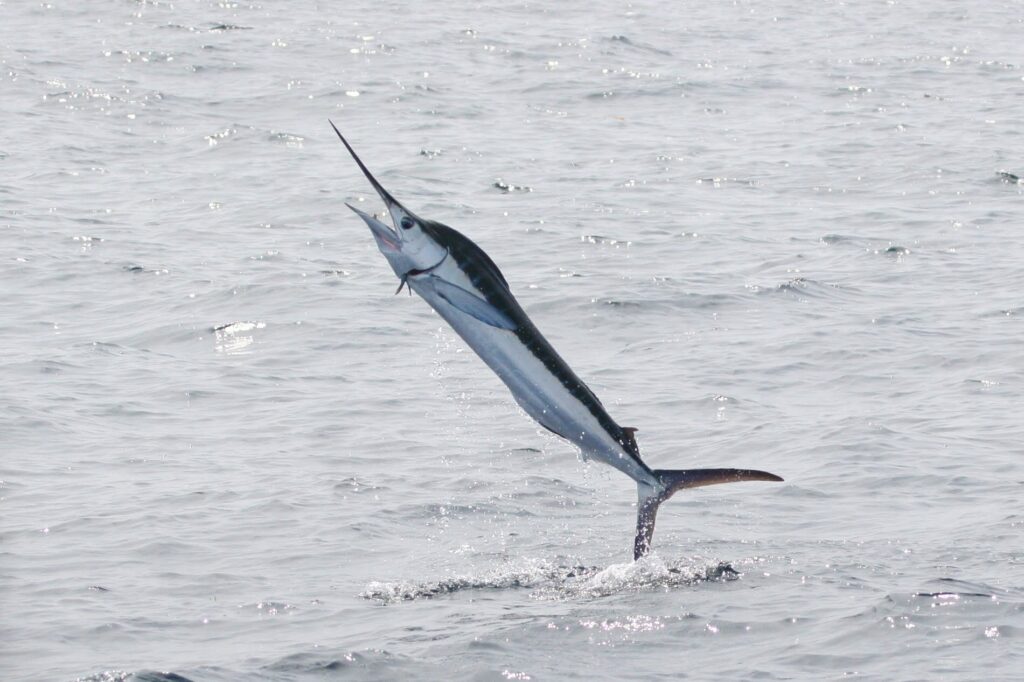 The White Marlin is a smaller member of the Marlin family that is most often caught while fishing for Mahi-mahi on Key West deep sea fishing trips.

White Marlin (Kajikia albida)
(Florida Record 161lbs.) The White Marlin, also known as the Atlantic White Marlin, is the smallest member of the Marlin family, about 1/3 larger than a Florida Keys sailfish and typically running from about 80 to 170 pounds with an average length around 8 feet. It is a long, slender fish built for high-speed swimming and hunting. The White Marlin has a long bill and deeply-forked tail similar to the Blue Marlin, and White Marlin females are usually larger than the males as is also the case with Blue Marlin.

The White Marlin has a different color pattern than the Blue Marlin. The blue-black coloring of the White Marlin’s back extends further down the sides of the fish, with a well-defined break at the lateral line. There are light-colored stripes on the upper portion, and a silver-white color on the fish’s lower sides and belly. Another very noticeable difference between the two species is the White Marlin’s longer dorsal fin that extends along most of the body. And the White Marlin’s pectoral and pelvic fins are more rounded and wider at the tips than the fins of the Blue Marlin.

White Marlin Habitat and Behavior
White Marlin live in tropical and subtropical Atlantic Ocean waters deeper than 300 feet between the latitudes of 45° N and 45° S. They prefer warm water temperatures and tend to stay near the surface. White Marlin are sometimes found near banks, shoals, and canyons, but are not limited to those locations.

White Marlin are usually solitary, but small schools of 5 to 12 fish are occasionally seen feeding on schools of bait or “tailing” – moving along with only the upper part of their tail fin visible above the surface of the water. Most typically White Marlin are found in loose aggregations of numerous fish scattered over fairly large areas.

White Marlin will consume any prey that is manageable for their size but they prefer schooling flying fish, small Tuna, Mahi-mahi, and Squid. They sometimes hunt near other apex predators in order to increase the efficiency of foraging. White Marlin will also dive to about 650 feet in a V- or U- shaped parabola in search of food below the surface. Larger eyes and a mechanism for selectively warming their eye and brain tissue help the fish survive in the lower temperatures and darker environments of deep water.

Fishing for White Marlin
Competition White Marlin fishing is a multimillion-dollar enterprise in well-developed countries. In the U.S. the largest sport fishery for this species takes place in the summer between Cape Cod, Massachusetts, and Cape Hatteras, North Carolina. Around Key West, charter captains report that White Marlin are always taken while fishing for Mahi-mahi.

They are usually caught while trolling ballyhoo over deep water bottom structure like Woods Wall and the Humps up north near Marathon Key. Other good baits include Mullet, Mackerel, Herring, Squid, and a variety of baitfish and squid imitating lures. The primary season for White Marlin is May and June.

The White Marlin puts on a furious fight when hooked, with a lot of tail-walking and many high leaps. That’s why White Marlin are very exciting fish to catch despite their smaller size. Fisherman are cautioned to wear hand protection and be very careful when handling White Marlin because they often thrash wildly when boated and are capable of inflicting serious wounds with their bill.