Fishing for Cobia in Key West 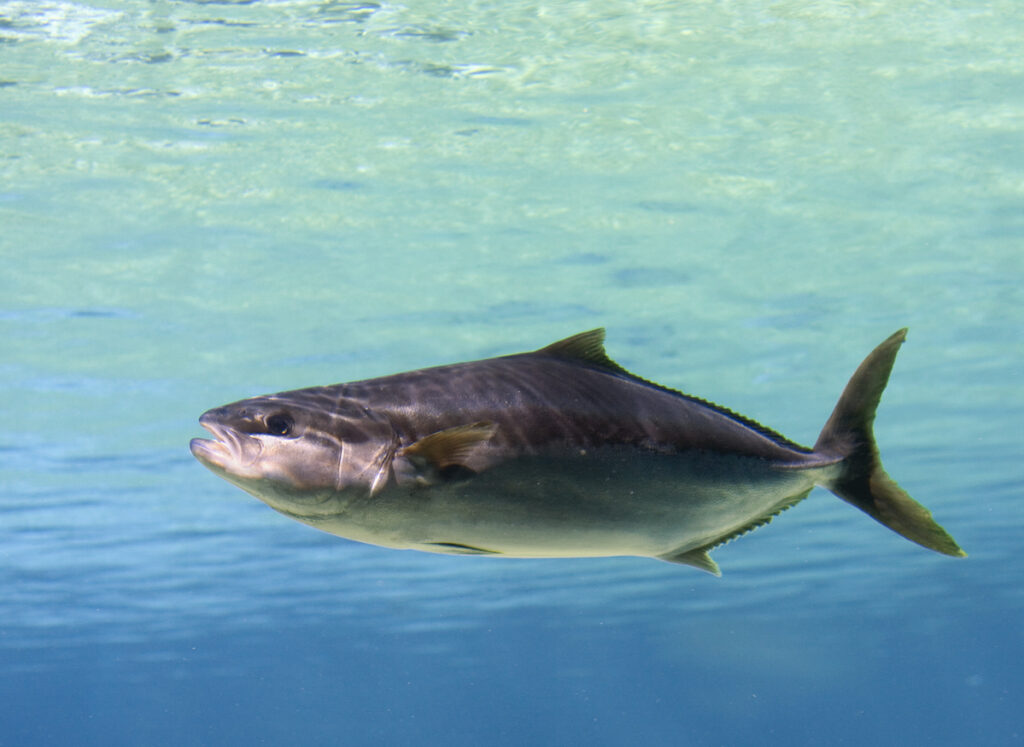 The Cobia is prized by Key West fishermen for its large size, fighting ability, and firm, delicious meat. It is a curious and aggressive fish so it bites readily when found. It has a shark-like profile and can grow to 6 feet in length. To give an idea of the usual size of this big predator, the limit for a keeper fish is 36” in the Gulf and 33” in the Atlantic off Key West. (Florida Record: 130lbs 1oz)

Cobia (Rachycentron canadum)
The Cobia, also known as the Ling, Lemonfish, or Crabeater, is the only representative of its genus Rachycentron and family Rachycentridae. It is a pelagic fish that is distributed in tropical, subtropical and warm-temperate waters worldwide. Cobia in the western Atlantic Ocean occur from Nova Scotia south to Argentina, including throughout the Caribbean Sea, and are particularly abundant in warm coastal waters from the Chesapeake Bay south and throughout the Gulf of Mexico. They prefer water temperatures between 68°- 86°F and migrate south and offshore to find warmer water during the fall and winter months. In early spring, the Cobia migrate northward along the Atlantic coast. They are plentiful in the harbors and around wrecks and reefs off south Florida and the Florida Keys.

The Cobia is a dramatic-looking fish with a long, slim body, a broad, depressed head, and a lower jaw that extends past the upper jaw. It is often mistaken for a shark because of its large, upright dorsal fin and the fact that it tends to swim with pectoral fins extended, giving it a shark-like profile when seen from above. In another similarity to Sharks, Cobia have no swim bladder.

Cobia are smooth-skinned fish with tiny scales, dark brown to silver on the back, paler on the sides, and grayish white to silvery below. Two narrow dark bands extend from the snout to the base of the tail fin, and these stripes are bordered above and below by paler bands. Young Cobia have conspicuous alternating black and white horizontal stripes which fade as the fish mature. Cobia have been recorded at 78” and 172lbs, but around Key West they commonly weigh about 30-50lbs and reach lengths of 20-47 inches.

Cobia Habitat and Behavior
Female Cobia in the western Atlantic reach sexual maturity at 3 years of age, males at 2 years. Cobia spawn during different seasons depending on location and water temperature. In the Gulf of Mexico, they spawn from April through September, forming large aggregations and releasing eggs and sperm into open water offshore during the daylight hours. Cobia also sometimes spawn in estuaries and shallow bays. During spawning, the Cobia’s body coloration changes from brown to a light horizontal-striped pattern. The female can spawn up to 30 times in a season and normally spawns 15-20 times, once every 9-12 days.  The eggs and larvae float freely as plankton for about a week until the eyes and mouth develop. The young then head offshore, and can live for 15 years or more.

Cobia are found over the continental shelf and around offshore reefs. They also live inshore, inhabiting bays, inlets, and mangroves. Outside of the annual spawning season, the Cobia is generally a solitary fish, although it sometimes congregates around structural oases such as pilings, buoys, platforms, anchored boats, and flotsam. While migrating through shallow waters along the shoreline, they can be found cruising in packs of 3-100 fish as they hunt for food. Cobia feed mainly on crabs, and are called Crabeaters in some regions. They also eat squid and small fish such as mullet, eels, jacks, snappers, pinfish, croakers, grunts, and herring.

Cobia closely resemble their relatives the Remoras (family Echeneidae). Cobia have a thicker body and lack the dorsal sucker, but are known to feed in a manner similar to Remoras, following rays, turtles, and sharks to scavenge the leftovers of their meals.

Fishing for Cobia
Medium to heavy tackle is needed to land these powerful fish, as large specimens in the 50-80lb class are frequently hooked. Cobia are very curious fish and show little fear of boats, often swimming right up to the boat to hit a lure or eat any kind of live or dead bait. A common technique around Key West is to take advantage of the Cobia’s natural curiosity by bringing a hooked fish alongside the boat and leaving it in the water. The remaining fish will be attracted and stay close, allowing the angler to catch several more.

Cobia are aggressive and will strike hard at popping surface lures, making for great flyfishing action. When found in schools during migration, Cobia can provide great sight-casting opportunities as they cruise in groups of two to five fish on the surface over the reefs and wrecks around Key West. In this case, live crabs and small fish will work well when kept near the surface. If the Cobia are deeper, use just enough weight to get the bait down while retaining its movement.

Cobia make excellent eating and the firm, white meat is prized for recipes that call for boiling or poaching. It is also common on south Florida sushi bars. Cobia will often dive deep during a fight and push both gear and angler to the limits, but if victory is achieved, the Cobia is always welcome as a table fish by the lucky fishermen experienced with choosing Key West gamefish for the table.