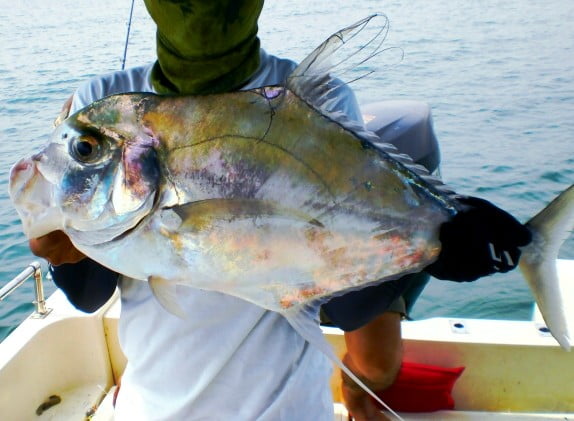 The dramatic-looking African Pompano is a hard-fighting fish and is considered to be one of the strongest of the Jack family. In Key West, they are often caught around deep wrecks and rocky outcroppings. If you are lucky enough to hook an African Pompano and have the tackle need to keep it on, expect an epic battle from this tough marine predator and legendary Pacific Island gamefish. (Florida Record: 50lbs 8oz)

African Pompano Habitat and Behavior
The African Pompano ranges in tropical to temperate oceans worldwide, seeking out water temperatures from 65° to 80°F. The species has been documented on both coasts of the USA and, in the Western Atlantic, they may be found as far north as Cape Cod, but are more common from the Carolinas south.

The reproductive habits and maturation processes of the African Pompano are largely unknown. Research carried out in Indian waters revealed that the abundance of African Pompano larvae peaked in April, and the eggs were found to be spherical and pelagic, with a yolk and globule of oil present. It is thought that African Pompano populations off of Mexico spawn in spring over sandy bottoms.

Juvenile fish appear to be pelagic and reliant on ocean currents; juveniles will often be found in estuarine waters, perhaps carried there by currents. This pelagic stage of life may account for the fact that African Pompano can suddenly be abundant in an area after being absent for a long period of time.

Young fish prefer shallow reefs, and adults may be found over shallow reefs as well, but generally move into deeper water as they grow.Adults tend to inhabit coastal waters, preferring wrecks and reefs throughout the water column to depths of about 350 feet. Around the Keys, deep wrecks will often hold big African Pompano.

African Pompano are schooling predators that hunt a variety of crustaceans including zooplankton like sand fleas and shrimps, along with squid, octopi, and small fish. They are also known to eat Moray Eels, and these are a traditional bait used for Trevally species in Hawaii and other Pacific island waters.

Fishing for African Pompano
Large African Pompano are highly rated as game fish, swift and powerful on the strike and very tough in the fight. They can be found almost anywhere, from rocky outcrops to open flats and estuary waters. Around Key West, African Pompano are most often caught on the deep wrecks to the south of the island.

When a large African Pompano is hooked, the angler will be challenged to keep the fish from heading immediately to the bottom or into a structure and breaking the line on the first run. Tackle must be in the 50 lb. range to handle big African Pompano. A heavy rod and large reel are needed to keep the fish out of its shelter, particularly when fishing a wreck or reef. Smaller fish can be taken on light tackle, but skill will be required to successfully land the fish.

African Pompano are fished with techniques similar to those used on other Jacks. They have very good eyesight, making leader choice and bait presentation critical. A favorite bait for small African Pompano is 2 or 3 fresh shrimp rigged on light tackle – a size 4/0 hook on a 30lb. leader attached to 15lb. monofilament. Larger fish respond well to live bait like shad or herring hooked just in front of the eye socket. Drop the bait to the depth at which the fish appear on the fish finder. African Pompano are also occasionally taken on small trolled lures, poppers, jigs, and even wet flies. Besides being hard fighters, African Pompano are prized around the world as good table fish.