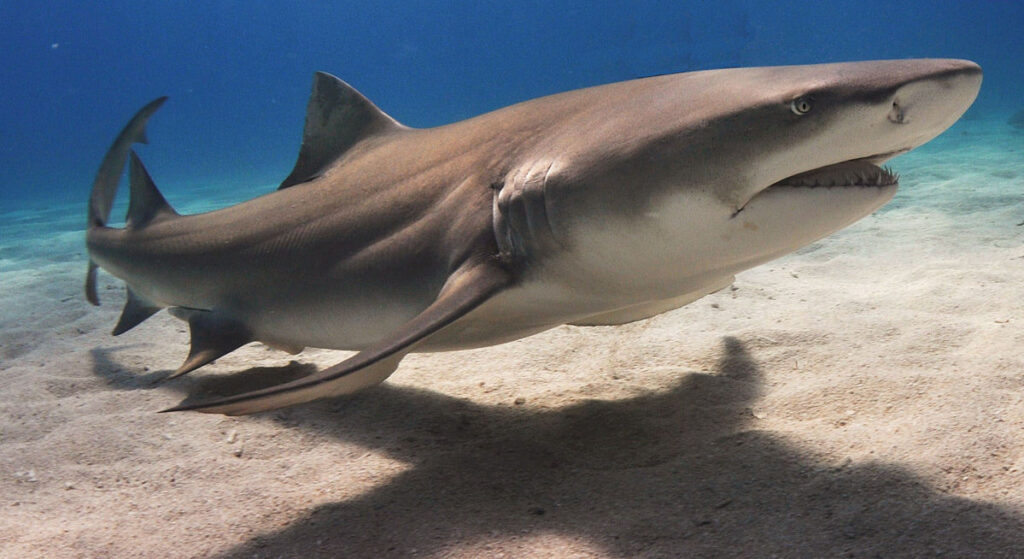 Shark fishing in Key West is the ultimate in big-game action fishing, and in the shallow, crystal-clear waters of the Backcountry flats the bites and fights are up close and personal. Lemon Sharks are brutally strong predators that commonly top 200lbs and 6 feet in length, so be ready to battle for an hour or more before the Lemon Shark is brought to the boat for photos. (Florida Record: 397lbs)

Lemon Shark (Negaprion brevirostris)
Lemon Sharks are members of the family Carcharhinidae, or Requiem Sharks, that includes other migratory, live-bearing Sharks such as the Bull Shark, Tiger Shark, Grey Reef Shark, and Blacktip Reef Shark. Lemon Sharks have been swimming in temperate waters since the Miocene period about 23 million years ago. They are named for their pale yellow-brown coloring that helps camouflage them against the sandy bottoms of the coastal shallows where they live, and rough skin that suggests the color and texture of a lemon. Skin colors vary from yellowish-brown to olive gray on the Shark’s dorsal surface, with a lighter yellowish tint on the undersides and no conspicuous markings on the body.

The Lemon Shark has a stocky body and a flattened head with a blunt, rounded snout that is shorter than the mouth is wide. It is most easily identified by its second dorsal fin, which is similar in size and shape to the first dorsal fin. The Lemon Shark is a large shark, common at lengths between 95 to 120 inches and reaching a maximum length of 125 to 135 inches and weight of 405 lbs. In Florida Keys waters, Lemon Sharks 4-7 feet long and weighing in the 150-200lb range are common. Although the Lemon Shark’s life span is unknown, the average adult is thought to be 25 to 30 years old.

Lemon Shark Habitat and Behavior
Lemon Sharks have been intensively studied and are one of the best-known Shark species. They inhabit shallow, subtropical waters and are found in the western Atlantic from the coast of New Jersey south throughout the Gulf of Mexico and Caribbean Sea down to Southern Brazil. They also live along the coast of West Africa and in the eastern Pacific Ocean from southern Baja California to Ecuador.

Lemon Sharks move into deeper oceanic waters during their winter migration southward, but tend to prefer the waters over the continental shelf and inshore, and generally occur in depths up to 300 feet. Along coastlines, Lemon Sharks inhabit coral reefs, mangroves, enclosed bays, sounds, and river mouths. When fishing in Key West, Lemon Sharks are plentiful over the reef and most frequently seen up close in the shallow Backcountry waters where multiple Sharks are often attracted to a boat by the struggles of hooked fish.

Lemon Sharks are known to form aggregations based on size and sex, and research indicates that they actively prefer to live in loose social groups, possibly deriving some survival benefits from doing so. The Lemon Shark’s brain is comparable in relative size to that of a mammal or bird, indicating that they may have the ability to learn from social interactions, form stable social bonds, cooperate with other individuals, and establish dominance hierarchies.

Lemon Sharks reach sexual maturity at about 12-16 years of age, with males tending to mature earlier than females. They have a low reproduction rate, with females giving birth every 2 years. Mating occurs in shallow water mating grounds during the spring months. Female lemon sharks are polyandrous, meaning they mate with several males. This adaptation is thought to help the female avoid the harassment and biting inflicted on them by males in the mating season. Fertilization is internal, with sperm from several males stored in an oviducal gland for several months, resulting in sperm competition.

Mating is followed by a 10- to 12-month gestation period, then the female gives birth to litters of 14 to 17 live young called pups. The pups are about 2 feet long when born. The Sharks utilize shallow bays and coastal lagoons as nursery areas, and return to the same birthing grounds for each mating. The young remain in these birthing areas for several years before moving into deeper water.

Lemon Sharks feed more actively during darker moon phases than on the full moon or during the day, and are most active in water temperatures between 68 to 86 F. Lemon Sharks hunt mainly at night and feed on a variety of bony fishes. They have a high degree of preference for prey species and size depending on what is most available and easiest to catch. Parrot Fish and similar species that remain stationary while feeding and depend on camouflage rather than flight for protection are preferred targets for the Lemon Shark’s stalking method of hunting. Lemon Sharks will also eat squid and octopus, crustaceans, rays, and small Sharks including juveniles of their own species.

Fishing for Lemon Sharks
As an inshore Shark, the Lemon Shark is a common catch for Florida beach and pier fishermen. Groups of Lemon Sharks have been observed to gather around piers and fishing docks during the night then return to deeper water in the day. Around Key West, Lemon Sharks can be caught on the deep reef and the Flats, with the latter being the favorite fishing grounds for most Key West Shark fishing charters. Lemon Sharks are the most numerous of several Shark species found in the Key West Backcountry.

On the reef, chumming for Yellowtail is a proven way to draw groups of Lemon Sharks, and they will readily take a live Yellowtail drifted behind the boat. Once several Yellowtail have been caught, the thrashing of the hooked fish attracts the Sharks more than the chum does, and the hunting Lemon Sharks will dart in and grab fish from the lines. Splashing a split Barracuda or Bonito carcass in the water will also send out the sound and scent signals that attract Lemon Sharks. With several Sharks gathered around the boat, simply toss a live or chunk bait out on a length of steel leader and the fight will be on.

On the Flats, the moving water of an incoming or outgoing tide is very important, as the Lemon Sharks prowl the channels and edges of the Flats waiting for the water to carry food to them. The water also carries the scent of chum and bait away from the boat, where the Sharks will find it and swim upstream to search for food. In the shallow water of the Flats, lighter tackle can be used because the Sharks cannot dive deep during the fight. It is very exciting to sight cast at dozens of hungry Lemon Sharks surrounding the boat.

Lemon Sharks are targeted by commercial fishermen throughout their range because the meat is delicious and the fins are very valuable for export to Asia. Lemon Shark skin is prized for making into leather. Lemon Sharks are protected in Florida State waters, with all fishing being catch and release as is the common practice for all Shark species on the majority of Key West Shark fishing charters.