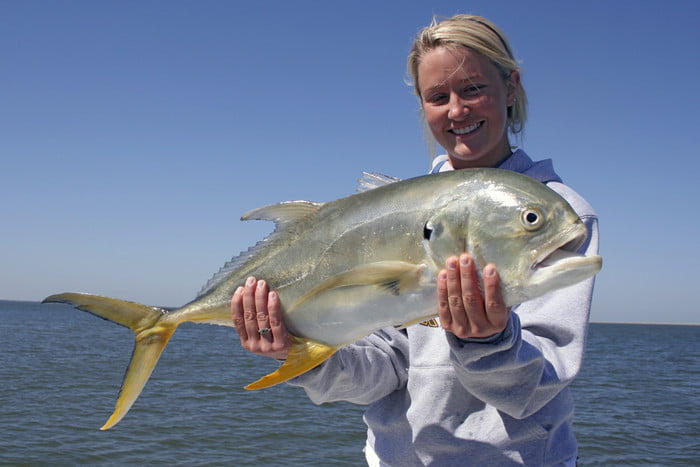 Like other members of the jack family, Yellow Jacks are hard fighters when hooked, running fast and pulling hard.

Yellow Jack ( Carangoides bartholomaei) Introduction
The Yellow Jack is member of the Caragidae family, which includes Jacks, Pompanos, Jack Mackerels and Scads. Yellow Jacks have the solid, elongated and vertically compressed body shape typical to fish in the Jack family. The Yellow Jack’s common name comes from the color the fish turn when they get older. They tend to change to a more yellow color, and large specimens have bright yellow fins. Yellow Jacks have a pale yellow-green-blue color on their backs, changing to silver on the underside. Juvenile fish have about 5 vertical bands, which fade to blotches and finally disappear as they mature. Yellow Jacks are typically about 20 inches long, but they can be large, sometimes growing over 36 inches long and weighing up to 30 pounds.

Yellow Jack Habitat and Behavior
The Yellow Jack ranges the western Atlantic coastline from Massachusetts in the north to Brazil in the south, and is also found near a number of offshore islands from Bermuda throughout the West Indies and Bahamas. Yellow Jacks prefer offshore reefs and the sandy shallows of Caribbean islands, or open waters over the continental shelf. They are rarely found in coastal waters near the American continent. Around Caribbean islands, Yellow Jacks are often encountered on the Flats foraging with other species. In Key West waters, they are found on the Flats as well as over reefs and wrecks.

Yellow Jacks move alone and in small schools. They mainly hunt smaller fish, although there are records of them taking bottom food such as small crabs and shrimp. They often follow other predators such as eels, stingrays and nurse sharks to take advantage of disturbed prey and scraps left by the bigger fish. Yellow Jacks have also been observed following spinner dolphins and feeding off the scraps and wounded fish generated by the hunting dolphins.

Yellow jacks reach sexual maturity at different times in different locations and spawning occurs in offshore waters between February and October. The fish have been observed to court in pairs then congregate in large balls of up to 300 fish to spawn. Juvenile Yellow Jacks live near the surface, and often hide in large mats of Sargassum weed, where their coloration camouflages them. The weed mats can float for long distances in the Gulf Stream, and this is thought to be responsible for Yellow Jacks being found as far north as Massachusetts.

Fishing for Yellow Jacks
Yellow Jacks are often caught while trolling for other fish, but they can also be targeted when schools are found feeding over wrecks or on the Flats. Like other members of the Jack family, Yellow Jacks are hard fighters when hooked, running fast and pulling hard. When caught on light tackle, a Yellow Jack can easily strip a reel bare. Yellow Jacks will come to investigate a chum slick over a reef or wreck, but they can be difficult to catch. A small live bait is a good way to hook one. When they are found following sharks or rays, they are in a more opportunistic and active feeding mode and will often readily hit top water plugs. Unlike the Crevalle Jack, Yellow Jacks are very good eating fish.