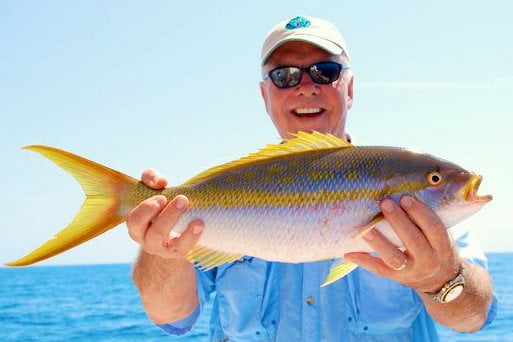 Yellowtail are fun on light tackle, the action is fast once they start biting and they are a favorite eating fish.

Yellowtail Snapper (Ocyurus chrysurus)
(Florida Record 8lbs. 9oz.) The Yellowtail Snapper, a beautifully colored and abundant member of the Snapper family, is one of the most popular and commonly caught Key West game fish.The back and upper sides of the fish are olive to bluish-black in color, with yellow spots and alternating narrow pink and yellow stripes running longitudinally. A conspicuous yellow stripe begins at the mouth and runs along the side of the fish to the tail, becoming broader near the dorsal fins.

The tail fin is yellow, and fish in the Florida Keys have a deeply forked tail, with an upper lobe that is longer than the lower one. The Yellowtail has a smaller head and mouth than members of most other snapper species. Adult Yellowtail Snappers may reach a maximum length of 30 inches, but more commonly measure about 18-20 inches in length and rarely exceed 5 pounds.

Yellowtail Snapper Habitat and Behavior
Yellowtail Snappers are found along the western Atlantic coast from Massachusetts to Bermuda, southward to southeastern Brazil, and in the Gulf of Mexico and the Caribbean Sea. They are most common off South Florida and in the Bahamas. Large adult Yellowtails live over sandy patches near reefs at depths of 32-230 feet, while smaller adults gather over areas of hard substrate. Juvenile fish live in seagrass beds near shore where they are protected from predators. Adult Yellowtails will inhabit the same area for long periods of time, and they are often seen swimming well above the bottom near shipwrecks and on some of the reefs around Key West.

Adult yellowtail snappers are nocturnal predators, feeding primarily on crabs, shrimp, worms, and smaller fish. Juveniles feed on plankton among the seagrass. Yellowtail Snappers are wary fish and have many predators including Barracuda, Groupers, and Sharks. They have excellent eyesight, and schools will abandon an area when a predator comes near.

Yellowtail reach sexual maturity when they are 10-12 inches long. They spawn year-round, but peak spawning periods vary with location, and an overall decline in activity takes place during the winter months. When spawning, the fish gather in offshore schools and release their eggs into open water. Yellowtail Snappers live for 6-14 years.

Fishing for Yellowtail Snapper
Yellowtail Snappers are typically caught in 30-120 feet of water around reefs and shipwrecks. Although they can be caught year-round, they are considered to be a summer fish because they gather in large groups to spawn near the reef edge from spring through fall but most heavily in midsummer. They can be cautious feeders, and their keen eyesight makes light leaders and small hooks a necessity. Yellowtail can be caught on artificial baits and lures, but live or frozen bait is the preferred method.

Around Key West, mahua baitfish, small chunks of Bonita, or other small cut baits work well. These fish will come up from the bottom to a chum slick then remain near the boat for extended periods of time. When excited by chum, Yellowtail will feed in a frenzy, and it is not uncommon to limit out on Yellowtail within minutes once the proper technique is applied.

Yellowtail Snapper must be at least 12 inches long to keep, and most fish caught are between 10 to 18 inches, with the larger fish known locally as “Flags” because of their extended tail fins. Although they are small fish, Yellowtail are fun to catch on light tackle, and the action can be fast once they start biting. They are also considered to be one of the best-eating fish of the Snapper family.