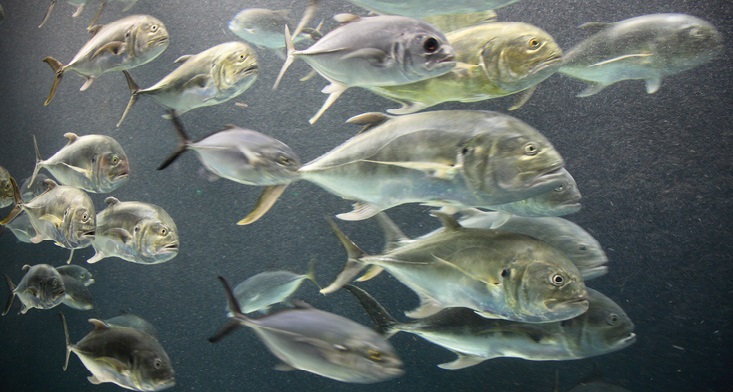 One of the most popular species on Key West charter fishing trips, the Jack Crevalle is prized as an excellent sportfish. Jack Crevalle live and hunt in a wide range of environments, feed in wolf-like packs, strike aggressively, and fight harder than almost any other fish in the water. (Florida Record: 57lbs)

Jack Crevalle (Caranx hippos)
The Jack Crevalle is one of many species of large pelagic marine fish that make up the family Carangidae. The name Crevalle comes from the Latin caballa, the feminine form of caballus, meaning horse, and the species name hippos is the Greek word for horse. In some parts of its range, fisherman sometimes call this fish the Horse Jack or Horse Mackerel. Also referred to as the Crevalle Jack or the Black-tailed Trevally, around southern Florida it is often called the Canal Tuna for its habit of pursuing baitfish deep into inland canals.

The Jack Crevalle has the look typical of most fish in genus Caranx which includes the Jacks and Trevallies. It has a deep, vertically compressed body that features a powerful, deeply-forked, sickle-shaped tail and a blunt snout with large eyes and a protruding lower jaw that give the fish a pugnacious bull dog look. As in other species of Carangidae, a series of bony scutes extend along both sides of the tail and are thought to help with stability during fast swimming.

Coloration ranges from brassy green to blue or bluish-black on the upper side, becoming silvery white to yellowish or golden below. Caudal and tail fins may have a yellowish tint. A dark spot present on the pectoral fin is one of the features that distinguishes the Jack Crevalle from related species. Another distinguishing feature is a small patch of scales in front of the pelvic fins on an otherwise scaleless chest. The Jack Crevalle is the only Jack in the western Atlantic Ocean with this patch. Juvenile fish have 5 dark bars on their bodies that are present until the fish reach a size of about 7 inches.

Jack Crevalle Habitat and Behavior
Jack Crevalle are coastal/inshore fish that inhabit tropical and temperate waters in the western and eastern Atlantic Ocean. In western Atlantic coastal waters, Jack Crevalle have been recorded from Novia Scotia to Uruguay. They also live in the Gulf of Mexico, especially along the coast of Texas and the west coast of Florida, and throughout the Caribbean Sea. As a fairly important commercial fish over much of its range, the Jack Crevalle’s growth stages have been extensively studied.

Jack Crevalle reach sexual maturity between 4-6 years age, with females maturing later than males. Females are also typically larger than males. Spawning seasons vary with location, but are thought to occur year-round in most areas. In southern Florida, the peak spawning period is between March and September, when the fish spawn off the southeastern coast and the eggs are carried along the Gulf Stream current. During spawning activities, Jack Crevalle form large aggregations of more than 1,000 fish. Spawning pairs break away from the school to engage in courtship behavior. During courting, one fish will turn a darker color than the other. The courting pair sometimes spawns before rejoining the school. At other times, pairs return to the school to spawn with the mass of other fish.  The female is estimated to release up to one million eggs which drift with the currents.

Jack Crevalle habitat changes according to the fish’s life stage. After hatching, the larvae are pelagic in waters along the continental shelf and slope, and young juveniles in the pelagic environment accumulate around weed patches, oil platforms, and floating objects. They are also known to swim along with larger animals and moving boats. In some populations, juveniles make their way inshore to estuaries that are used as nursery areas. The young fish form large, fast-moving schools to feed on small fish and crustaceans.

Jacks of all ages can live in brackish waters, and both juveniles and adults are found in upstream currents. Large adults will move offshore to live over reefs and around wrecks and other structure in waters up to 327 feet deep. Adult fish prefer water temperatures between 69-84.9°F. Although both adult and juvenile Jack Crevalle are usually found in schools, larger individuals may be found swimming alone. They reach a maximum length of 40 inches and weight of 70lbs, with more common sizes up to about 24 inches. The oldest recorded individual was 17 years old.

The Jack Crevalle is a powerful predator, feeding aggressively in large schools and eating a wide variety of prey. They will feed during day or night time, but are generally thought to be mostly inactive at night. Jack Crevalle mainly eat many types of small fish throughout their life stages, with crustaceans and shrimp being a secondary part of their diet. Their diet will change with location and season, which has prompted some researchers to consider the fish to be an indiscriminate feeder.

Fishing for Jack Crevalle
Jack Crevalle are known as aggressive feeders and powerful fighters and are a highly-regarded gamefish in Florida waters. They tend to stay inshore or near shore, and can also be caught in freshwater rivers around Florida. Jacks are often found under diving birds, with the fish boiling the water surface while feeding on bait. A school of Jacks will chase bait into a ball and feed wildly; they are also known for chasing schools of baitfish for long distances and up into shallow water.

Anglers target Jack Crevalle from boats, as well as from piers and jetties. Favorable fishing spots include areas with sudden depth changes and strong currents and eddies. Around Key West, large Jack Crevalle can be found on the deeper reefs and wrecks, where they hunt schools of baitfish over the top of the structure. During baitfish migrations, Jack Crevalle will move into Backcountry waters. When a school is feeding, Jacks will often strike at anything offered, with competitive feeding and multiple hookups being common at these times.

A sturdy saltwater spinning or fly rod is needed to target Jack Crevalle, and they will take live or cut baits and a variety of artificial lures. Heavy monofilament leaders are a must as the Jack Crevalle’s teeth will cut the line. A favorite way to fish for Jack Crevalle is to locate a school that is driving baitfish in the shallows or on the surface above structure. At these times, light tackle can be used to throw nearly any type of lure or fly into the school to generate many hard hits and exciting battles with this strong fish. While they are commercially caught as food fish in many parts of the world, in Key West catch-and-release is common with Jack Crevalle as many U.S. fishermen do not consider the Jack’s dark red, strongly-flavored meat to be good table fare.