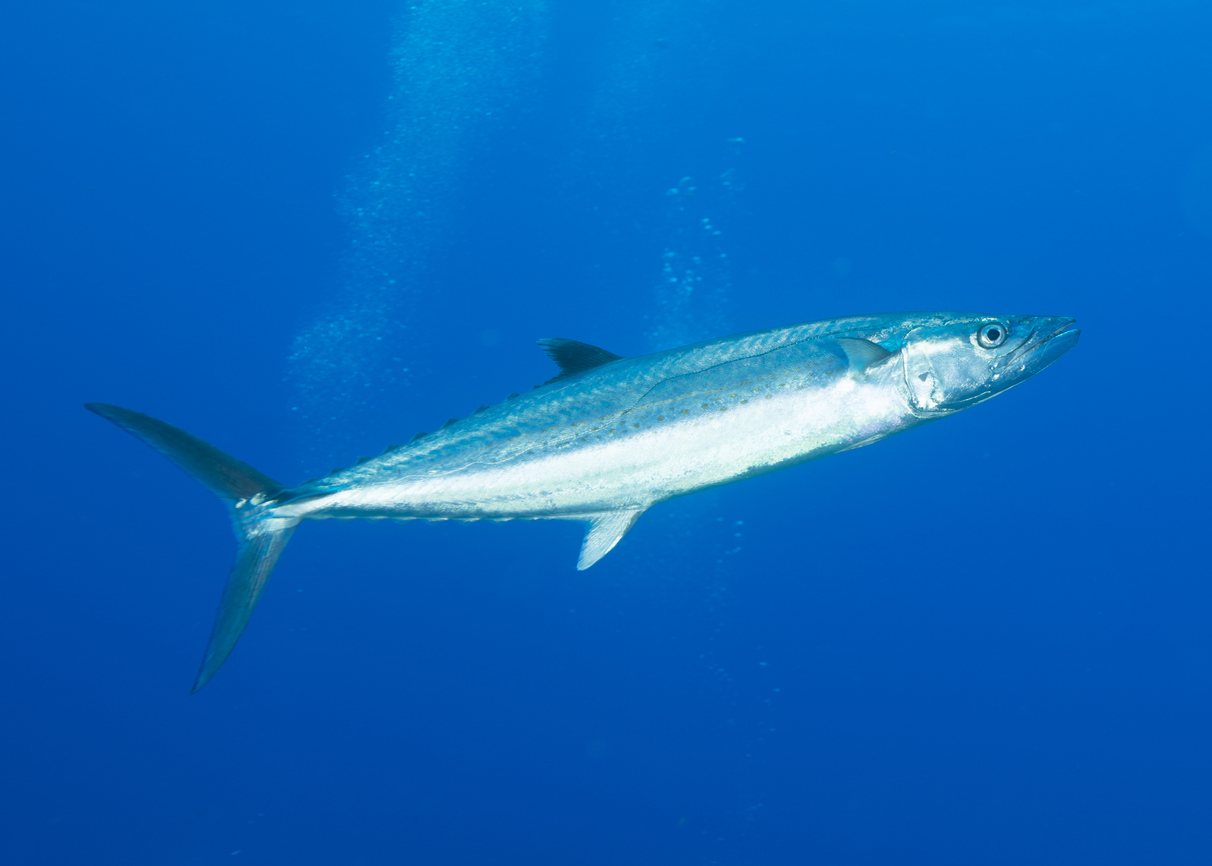 Cero Mackerel are fun sportfish. They are good fighters and fast swimmers that can quickly take out more than 100 yards of line when hooked up on light tackle. The Cero’s runs are exciting, and the fish occasionally jumps, showing its bright silver sides. They are a delicious food fish whether broiled, baked, pan-fried, or smoked. (Florida Record: 17lbs 2oz)

Cero Mackerel (Scomberomorous regalis)
The Cero Mackerel is one of many members of the family Scombridae, which includes the Bonitos, Kingfish, Wahoo, Mackerels, and Tunas. These fish are all swift open-water predators found in tropical and subtropical seas, and are among the most important commercial and sport fishes.

The Cero Mackerel has an elongated, slender body that is well-adapted for fast swimming at up to 30 mph. It is a beautifully colored fish, covered with small scales, iridescent bluish green on its back and silvery on the sides, with lines of yellow spots above and below a bronze stripe that runs from the pectoral fin to the base of the tail. The rear portions of the dorsal fins are bluish black. There is a series of finlets running from the second dorsal fin back to the tail, and three keels on either side of the tail.

Cero Mackerel are often confused with their close relative the Atlantic Spanish Mackerel, but the Cero has a longitudinal stripe and yellow-orange streaks in addition to the spots of the Spanish Mackerel. The Cero also reaches larger sizes, often 10 lbs. or more, with a recorded maximum of 72 inches in length and 17 lbs. in weight. However, fish this size are extremely rare, and a more common size is up to about 8 pounds.

Cero Mackerel Habitat and Behavior
Cero are limited in range to the western Atlantic Ocean, occurring from Massachusetts south throughout the Caribbean and down to Brazil. However, Cero are found most often in the Bahamas, the Caribbean Sea, and around south Florida, where it is rare north of Palm Beach. Common throughout the Keys around inshore patch reefs on the Gulf and Atlantic sides, Cero are considered a Florida native species and, unlike other mackerels, do not often move far from South Florida waters.

Male Cero reach sexual maturity at lengths between 12.8 to 13.4 inches, females at lengths of approximately 15 inches. Spawning occurs offshore, with the season varying regionally. Off the coast of Florida, spawning occurs year-round, with a peak in midsummer. Females from 15 to 31 inches long release 160,000 to 2.23 million eggs each. This species has buoyant eggs and pelagic larva, which drift through the open sea on currents, and find shelter in floating weed mats and around debris as they grow.

The Cero Mackerel is an inshore fish that prefers clear water around coral reefs. It is usually solitary, but sometimes forms schools over coral reefs, around wrecks, and along ledges in water ranging from 3.3 to 66 feet deep. Cero usually swim in mid-water and near the surface. The Cero is a shallow water and surface predator that is well-equipped to capture prey with powerful jaws and razor-sharp teeth. Like other Mackerels, Cero hunt in schools and are very aggressive when feeding. They feed primarily on baitfish like anchovies, herring, menhaden, pilchards, sardines, and silversides. Cero Mackerel also eat squid and shrimp, and, in Key West waters, ballyhoo are a favorite prey.

Fishing for Cero Mackerel
Cero Mackerel are popular gamefish and are also sometimes caught for use as bait for larger fish. Cero can be taken with the same fishing methods used for Spanish Mackerel. Trolling small shiny lures or cut bait at high speeds near and through schools of baitfish is a good way to hook Cero. When a feeding school of Cero Mackerel is located, they will hit chuggers, surface plugs, and shallow running plugs cast into the middle of them. Cero have very sharp teeth, so a wire leader is essential.

In the nearshore waters and on the reefs around Key West, showering schools of ballyhoo are often signs of hunting Cero. Chumming-in schools of ballyhoo to net them for the bait well will often also bring Cero Mackerel to the boat. When the bait well is full of ballyhoo, take a live one and drift it back into the swarming Mackerel to create a frenzy with Cero leaping after the panicked baitfish. Commercial ground chum or glass minnows can also be used to attract Cero to the back of an anchored boat. Live bait can then be cast weightless into the chum slick and allowed to drift behind the boat where the Cero are feeding.