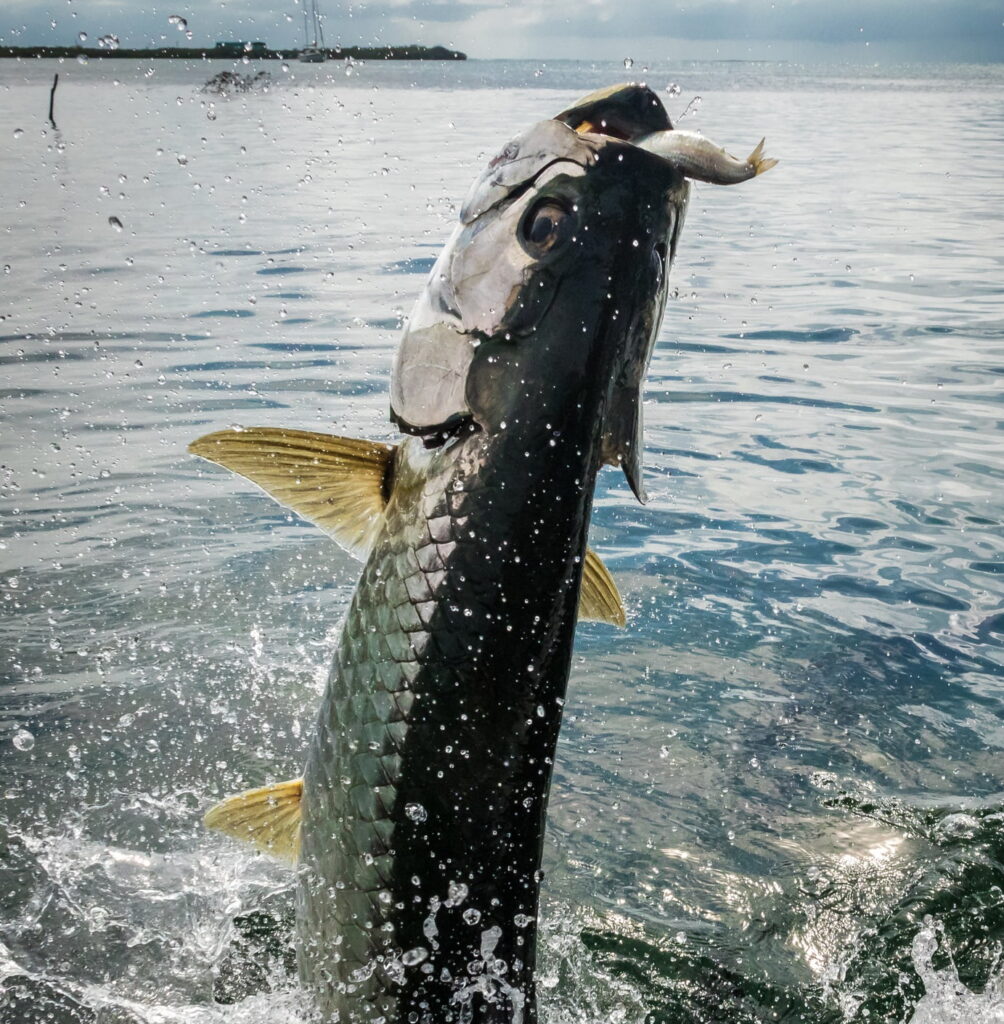 The Key West fishing season is headlined by the migration of the legendary Atlantic Tarpon, the giant Florida Keys gamefish also known as the Silver King. The waters around Key West are world renowned for a huge population of big Tarpon, and fishermen come from all over to fish the main run from January to May. The Key West Backcountry is also the only place in the Keys that supports a year-round population of juvenile Tarpon. (Florida Record: 248lbs)

Atlantic Tarpon (Megalops atlanticus)
Tarpon are huge, prehistoric-looking fish that are common in the 100-pound range, with the largest growing to 8 feet in length and over 300lbs. They are often called Silver Kings because of the large, mirror-like silver scales that cause the fish’s nearly vertical sides to flash in the sun when it jumps after being hooked.

The Tarpon has an elongated, streamlined, flat-sided body covered with heavy, armor-like scales. The body is greenish or bluish on top, with a distinctive high dorsal fin, the last ray of which extends back nearly to the tail as a heavy filament. The tail fin is very broad and deeply forked. The large mouth is turned upwards, and the lower jaw extends far down when the mouth is fully open. This gives the fish its nickname of Bucketmouth. The Tarpon has very small, fine teeth that cover its jaws, tongue, and skull base. Together with an elongated bony plate on the lower jaw, this allows the fish to crush crustaceans and other hard-shelled prey that is consumed whole.

The Tarpon’s most unique feature is a modified swim bladder that can work like a primitive lung to take in oxygen from air the fish gulps directly at the surface. This lets Tarpon tolerate oxygen-poor waters, and studies have shown that Tarpon must access atmospheric oxygen in order to survive, with juvenile tarpon being obligatory air-breathers. Gulping air is the reason for the Tarpon’s distinctive rolling at the surface that often allows an angler to spot a school of the fish.

More than simply looking prehistoric, the Atlantic Tarpon evolved about 18 million years ago and is one of the oldest living fish. They have long been famed for their immense strength and fighting ability along with their aerial acrobatics when hooked, or when pursued by Sharks, the chief predator of adult Tarpon. Tarpon have played a part in human history for thousands of years, with their scales used as decorations, nail files, and in traditional medicines. The fresco on the ceiling of the Sistine Chapel, completed by Michelangelo around 1510, includes a depiction of a Tarpon.

Atlantic Tarpon Habitat and Behavior
The Atlantic Tarpon has a large range in both the western and eastern Atlantic Ocean. In the western Atlantic, their range extends the complete length of the North and South American continents from Nova Scotia nearly to the tip of Argentina. However, their primary habitat is the warmer coastal waters around Florida, the Gulf of Mexico, and the West Indies. They are also known to migrate through the Panama Canal, and have been found in waters around the Pacific end of the Canal. Because Tarpon are not a food fish and lack commercial value, their life habits have not been as extensively documented as those of many other fish.

Tarpon reach sexual maturity at about 6-7 years of age and 4 feet of length. They make long migrations to offshore spawning areas, and usually spawn in May, June, and July, although some evidence indicates that they may spawn year-round. Individuals over 90lbs are nearly always female, and a female Tarpon just over 6 feet long can release about 12 million eggs. Like the closely related Bonefish, Ladyfish, and true Eels, a Tarpon begins life as a transparent ribbon-like larvae called a leptocephalus, then goes through 3 distinct stages over about 6 months to become a juvenile fish. Tarpon can live for more than 50 years, and the oldest Tarpon in captivity lived to be 63 years old.

Tarpon are inshore fish, usually living in depths of 100 feet or less. They prefer the edges of mangrove forests along shallow estuaries, and the hard-bottom, salt marsh, and sea-grass environments of the Keys. They can tolerate brackish water, and often enter bays and river mouths to travel up into fresh water. They are most active in warm waters around 75° F. The only variable that severely limits Tarpon habitat is low temperature; they become inactive below 60° and water temps of 40° can cause large Tarpon kills.

The Tarpon’s feeding habits depend on its level of growth and development. In the leptocephalus stage, the larval fish do not eat but instead absorb nutrients directly from the water. Larvae in growth stages II and III eat zooplankton, insects, and small fish, as do juvenile Tarpon. The shallow, warm, life-filled waters near mangroves and sea grasses are very important nurseries for larval and juvenile Tarpon. The young fish come inshore and often inhabit stagnant waters with very low oxygen content, places where many of their predators cannot live.

As Tarpon grow, they move away from plankton and begin to prey more exclusively on baitfish and larger invertebrates such as shrimp and crabs. Adult Tarpon are strictly carnivorous, feeding day and night on mid-water prey such as mullets, pinfish, marine catfishes, Atlantic needlefish, sardines, shrimp, and crabs. Tarpon usually swallow prey whole, and will eat nearly anything either dead or alive.

Fishing for Atlantic Tarpon
Tarpon are iconic fish wherever they are found, and are well-known around Key West as one of the greatest of saltwater gamefish. They are big, high-jumping and incredibly strong, with a fighting spirit that makes it difficult for all but the most experienced to land one in less than an hour. Highly prized and important to fishing tourism throughout their Florida range, Tarpon fishing is strictly catch and release unless the fisherman has purchased a special trophy tag. Barbless circle hooks are used for bait fishing, and single hooks rather than treble are recommended for lures. Experienced guides and anglers adhere to a number of specific rules and guidelines for handling and releasing Tarpon in order to ensure the survival of hooked fish.

Florida fishermen use a variety of methods to fish for Tarpon including live, dead, and artificial baits on spinning, conventional, or fly rods. Heavy gear is of course necessary when a small Tarpon still weighs 50 or 60 pounds. The easiest way to catch Tarpon is to use spinning or conventional gear spooled with line in the 30-80 lb range to present live baits like crab, mullet, or pinfish. Plastic artificial baits also work. Baits should be cast 4-5 feet in front of the feeding fish; plugs should be cast into the middle of the school or cast in front and retrieved away from the fish. Feeding Tarpon will strike readily, but it will be difficult to get a good hook set and hold the fish through the first jumps; the fight will be long and hard before the fish is brought to the boat.

The most challenging way to fish Tarpon is sight-casting with a fly rod in the shallow-water flats. Tarpon are the largest fish on the Key West Flats, and during the main run from January to May fishermen come from all over to test themselves against a Tarpon on the Flats. A Tarpon guide will use a shallow-water Flats Skiff to hunt for signs of feeding Tarpon moving onto the Flats on an incoming tide. In good conditions, Tarpon can be seen rolling on the surface with their silver sides, black backs or tails visible.

When a school is sighted, the guide will position the boat to intercept the fish and the angler must quickly false cast out enough line, then make an accurate cast to the fast-moving fish. With a successful hookup on fly gear, expect a fight several hours long. Any fish over 40 inches long cannot be lifted out of the water, so it is common to see shots of a happy angler posed in the water next to a massive Silver King.