July Fishing Hotter Than a Firecracker 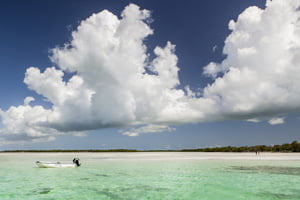 Warm summer weather and calm sea conditions make July a good time for Key West fishing. It is the season when tropical depressions swing up out of the southeast bringing short spells of unsettled weather and rain to the Gulf region but these tend to be short-lived events. Average rain day count for July is 8. If anything, we need the wind and precipitation to break up the heat a bit and get the water turned over.

The majority of the month offers ocean breezes, temperatures in the upper 80s, and very clear water. It sets up perfect conditions for hunting the Flats for Tarpon, Bonefish, and Permit to put together a Key West Grand Slam.

Flats and Backcountry fishing are solid in July, particularly in the last couple weeks of the month when we get into full summer. Look for the bite to pick up around the July full moon when big tides refresh the water on the Flats and activate the game fish.

For good Key West Permit fishing, you can alternate between the Flats and the shallow water wrecks. On the Flats, guides report getting shots at Permit in the mornings. Baiting with small crabs, being stealthy, and making accurate casts offers the best chances at a hook-up. Bonefish are plentiful and are found moving on and off the Flats with the tides. Bonefish numbers and sizes seem to be coming back up after showing a few seasons of weakness. The Bonefish go for shrimp, with on-target casting being the key as usual.

Although the main migration has passed, good numbers of Tarpon still linger in the channels, harbors, and on the grass flats in 3-4 feet of water. They hit well right after a shot of rain and wind passes, and in the period after the full moon at the end of the month. Once Tarpon are located, throwing pilchards or pinfish at them will work. Some captains have had success getting Tarpon to take flies as well. Early morning trips are producing fish on artificial lures like Hogy soft baits and MirroLure plugs.

Key West Flats fishing charters are consistently busy in July, and many fishermen are able to accomplish the Key West Grand Slam of boating a Tarpon, a Permit, and a Bonefish in a single outing. Barracuda and Shark fishing are also good on the Flats during July. Look for cloudy days or afternoons when lower light conditions make the fish less spooky and more willing to hit hard.

Besides fishing the Flats, Tarpon can be caught while drift-fishing or anchoring around the bridges and bridge channels. In the day time, the Tarpon go for live mullet fished on the surface, or dead ones fished on bottom rigs. In the evening, fishing with medium-sized crabs while drifting with the outgoing tide seems to produce the best results. Night fishing around the bridges about 2 hours after sunset on a strong outgoing tide is another way to scare up a few fish.

For fishermen who would like to get out and explore a little, there are many Silver Kings holding around the Marquesas Keys. This is a group of uninhabited mangrove islands about 20 miles west of Key West. Fishermen who make the run out in the early mornings are often rewarded with a good Tarpon bite.

The July Mangrove Snapper spawn is producing some exceptionally good fishing around Key West this year. Fish in the 4-6 pound range are common on the shallow near-shore patch reefs. Many boats are limiting on large fish every trip out, using both live pinfish on the bottom and cut bait at times when the fish come up and feed near the surface.

The Mangrove Snapper trips often produce Yellowtail Snapper, Black Grouper, and Horse Eye Jacks as well. Switching to plugs when fishing the coral patches is an effective way to boat Grouper and Snapper. Fishermen can have a lot of light tackle fun and put some great-tasting fish on the table.

For more good light tackle action, look for Sharks in the Backcountry shallows and channels. They will take live or dead mullet, ladyfish, or any kind of chunk bait. The Gulf waters are also good for Sharks this time of year, and wreck fishing produces big Sharks along with decent Cobia and many other species in fair numbers. Snapper fishing in particular is good out on the wrecks, with many big fish taken.

The Gulf Stream Current slows down a bit with the arrival of the summer dog days and fishing slows a little as well. Depending on how the weed lines set up, the deep sea charters hunt Mahi-Mahi with some success and the same areas produce the occasional White or Blue Marlin, Skipjack, or Wahoo.

More excitement can be found down where the water is cool on the Atlantic bottom and offshore wrecks. The wrecks are good in July for dropping live blue runners to big Amberjack. Deep bottom fishing near the Dry Tortugas and Key West offshore ledges is productive for Mutton Snapper, as well as for more unusual catches including Blueline Tilefish, Yellowedge Grouper, and Yelloweye Snapper. Sharks can be a problem in the deep waters. They are too plentiful at times and the water depth gives them ample time to steal bait and eat hooked fish.

Get Into the July Key West Fishing Excitement

July can be a pretty busy month around Key West. Summer vacation time plus the Tarpon season wrap-up and the prime Flats fishing season draws a lot of people to the Keys. It’s also Marlin season, and many tournaments are scheduled up and down the Keys. The venerable Key West Marlin Tournament takes place in mid-July. Inaugurated in 1982, this contest has produced plenty of Blue Marlin in the 500-pound range.

The waters around Key West are always crowded with boaters and hectic during the Spiny Lobster mini-season that runs the last consecutive Wednesday and Thursday in July. Lobster divers turn out in large numbers hoping the typical calm, clear water conditions of July will give them a shot at some tasty lobster tails. The Lobster are plentiful under the coral heads and on the ledges in the shallows around Key West.

July is a nice month to be on the water here in Key West. Don’t miss out on your own piece of the action! Contact Fish Key West soon and catch a Key West charter fishing trip before summer slips away.