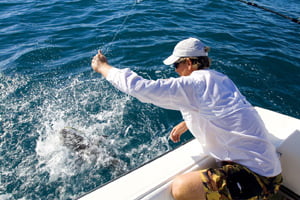 High summer in Key West brings days of heat and humidity, but it also marks some of the best fishing of the year for those who would like to get out on uncrowded water and go for a Grand Slam on the Flats.

Tarpon, Bonefish, and Permit are The Big Three, a sportfish combo that makes up the coveted Florida Keys Grand Slam. That is, when an angler manages to bring at least one of each species to the boat in a single day. It is a classic fishing challenge, but all three of these species like the warmer weather, so your chances of bagging a Grand Slam go way up if you fish Key West in August.

Swinging for a Keys Grand Slam

Bonefish are world-famous for the fun they provide to fisherman who hunt them by sight on the Flats and throw crab-pattern flies into groups of 4-5 bottom-feeding Bones. They are not large fish but are definitely strong fighters capable of speeding runs that will strip a reel of line in seconds. Catching Bonefish can prove to be addictive, as evidenced by the number of fishermen who chase them all over the Caribbean and even down into South America.

Hard-fighting Permit are also plentiful on the August Flats. Like Bonefish, Permit are tricky and exciting fish to catch on a fly rod. Hot weather and clear water bring ideal conditions for going after these two elite sportfish species. Both fish are keen-eyed sight hunters, and a light breeze like we get on summer afternoons raises just enough chop to help a fisherman avoid being spotted and catching nothing but a flash of silver and puff of sand as the fish jet away.

A good summer Slam strategy is to get out early and fish the channels and basins to bag a resident juvenile Tarpon. Then, as the sun shines more directly down into the water, go out to spot and try to hookup on your Bonefish and Permit.

For a little less challenge and a lot more hook-ups, go after the summer schools of Jacks and Barracuda that patrol the channels and mangrove edges on the hunt for smaller fish. The powerful Snook is also a summer favorite that is often found up against the mangrove roots. This large fish is most common in the northern reaches of the Florida Bay, but they are now caught in the Key West Backcountry with increasing frequency.

Summer Shark fishing is good on the Flats, with calmer winds making it easier to spot these hungry beasts. You can find them, or simply wait for hooked fish to start going missing or coming up in pieces. Then bait up the heavy gear with anything meaty and bloody and get ready for a wrestling match. It’s unforgettable fun that ends with the best pictures you will ever post online.

The August new moon marks Snapper spawning season, and reef fishing is excellent day or night. Mangrove, Mutton, and Yellowtail Snapper can be found all over the shallow reefs. These fish hit hard and are a lot of fun to fight on light tackle. As a bonus, all of these species are excellent eating fish, and spawning season can easily produce limits.

Fishermen pack the town for the Mangrove and Mutton Snapper spawns. Mangroves are easy to catch if you have live bait and a captain who knows the good spots. A school of these beautiful fish can produce 5- and 6-pound specimens, making for a freezer full of filets for fall fish fries. As the spawn ends around the last weeks of August, look for the Mangrove Snappers to migrate back to the Backcountry channels, where you can find plenty more good action fishing.

Dog Days Out on the Deep

There is no better way to beat the Key West August heat than by spending a day out on the cool, breezy open Atlantic. Offshore deep sea fishing can be good this time of year, but it generally calls for investing a full day on a 20-30 mile run out to sea.

It takes some patience, but this is trophy fishing with the potential for getting a fisherman into White Marlin, Wahoo, and big Mahi-Mahi. Your captain will look for seaweed – the more, the better. With a strong Gulf Stream current and a prevailing southeast breeze, drifting clumps of Sargasso Weed form long lines. The thousands of species of small marine life that inhabit these weedlines draw baitfish that in turn lure in and hold Mahi-Mahi, Wahoo, and other predators.

As new lines of weed drift within range every day, a skilled captain can get you into unfished schools of Mahi-Mahi, or Dolphinfish. The Mahi run big during the late summer season and 30-40 lb. fish are not uncommon. You may also get a chance at a Wahoo or White Marlin. For fast action, look for the wheeling flocks of sea birds that mark big schools of hunting Skipjack and Blackfin Tuna. Get on a school and throw lures into it for all the fish you can handle.

Beat the Hometown Heat with a Key West Fishing Trip

If you are looking for a special summer treat, come down and fish Key West. August is prime time to take advantage of low season discounts, uncrowded conditions, and calm waters. You can go for your Grand Slam or get into some fast multi-species action fishing in the Backcountry and on the reefs and wrecks. And don’t forget the great Shark fishing that happens this time of year.

You can beat the Florida heat with early morning half-day Key West fishing trips, spend the afternoons by the pool with an icy beverage, and party the evening away on Duval Street. Book your trip with the Fish Key West convenient and secure online reservation portal and come see what’s biting.