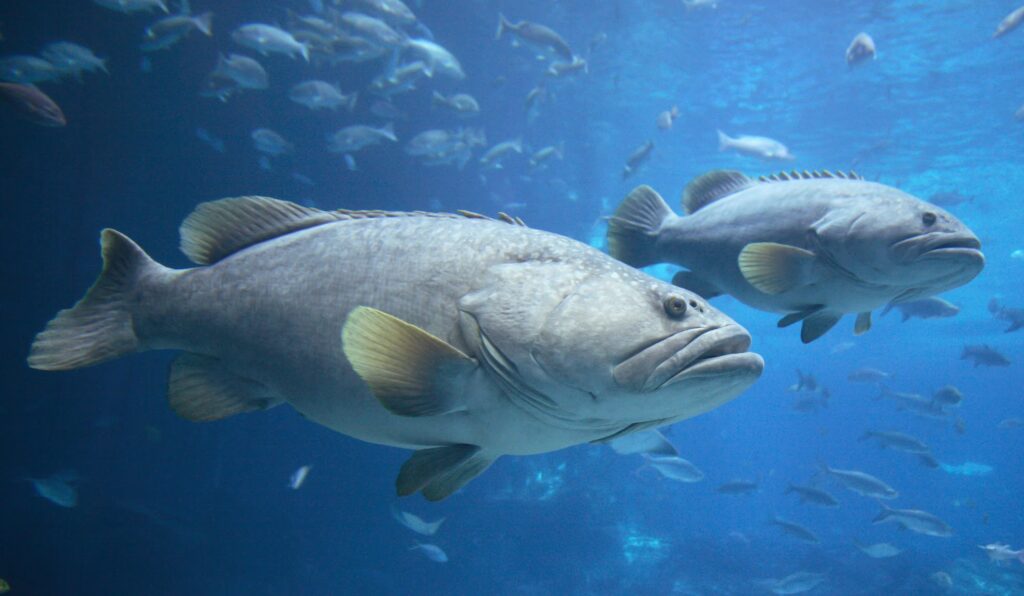 The Goliath Grouper is the largest of the Groupers, and it is difficult to do an Internet search for Key West fishing without coming across photos and videos of this dramatic giant. Goliaths have been fully protected since 1990, but fishermen up for the fight of their lives can try to bring one to the boat for photos before releasing it unharmed. (Florida Record: 680lbs)

Goliath Grouper (Epinephelus itajara)
The Goliath Grouper is the largest member of the sea bass family found in the western Atlantic. Goliaths can reach weights of 800lbs and lengths of more than 8 feet. Capable of eating a 4-foot Shark in one gulp, these giants are arguably the most dramatic member of the Grouper family, and large mature specimens are kings of the reef with no natural predators.

The Goliath Grouper’s body is elongated but robust, with the widest point from back to belly measuring more than half the fish’s total length. The eyes are relatively small in comparison to the fish’s broad head and large mouth. The Goliath has 3 to 5 rows of teeth in its lower jaw, including a number of short, weakly-developed canine teeth that distinguish this species from other North Atlantic Groupers. The teeth play a minor role in feeding; instead, the open mouth is huge and the Goliath sucks in most prey with a single gulp and swallows it whole.

Goliath Grouper are generally brownish yellow, gray, or olive colored, with small dark spots on head, body, and fins. Fish less than 3 feet in length display 3 or 4 irregular faint vertical bars on their sides, and juveniles are patterned with a series of dark vertical bands and blotches. The Goliath Grouper’s pectoral fins and tail fin have a distinctly rounded fan-like profile, and the pectoral fins are noticeably larger than the pelvic fins. The first dorsal fin is much shorter than the second dorsal fin.

Goliath Grouper Habitat and Behavior
Goliath Grouper range the shallow, inshore tropical waters of the western Atlantic Ocean from Florida, through the Caribbean Sea and Gulf of Mexico, south along nearly the entire Brazilian coastline. Goliaths are occasionally caught as far north as New England in waters off Maine and Massachusetts. The species is also found in the eastern Atlantic on the African coast from Senegal to Congo and in the eastern Pacific Ocean from the Gulf of California to Peru. Goliaths are an easy target for spearfishermen, and large specimens have been nearly wiped out throughout most of their western Atlantic range. The Goliath only thrives in significant numbers in Florida waters, where all harvest and possession has been illegal since 1990.

Male Goliath Grouper are sexually mature at 4 to 6 years of age and lengths of 43-45 inches, females at 6 to 7 years of age and 47-53 inches. Like many other Groupers, Goliaths are thought to be protogynous hermaphrodites, with individuals first maturing as females and later becoming males. However, there is no conclusive evidence to support this as of yet. Spawning is strongly influenced by the lunar cycle and, for the Gulf of Mexico and south Florida populations, peaks at night during new moons in July, August, and September.

Goliaths form offshore spawning aggregations that may include 100 or more individuals, with isolated patch reefs, shipwrecks, and rock ledges being their preferred spawning habitats. Fish may move up to 100km from their homes on inshore reefs out to the deep-water spawning sites. Females release eggs while the males release sperm into open offshore waters, with the eggs being dispersed by currents after fertilization. The larvae are pelagic for about 6 weeks before settling into shallow mangrove habitats, first among submerged leaf litter then along the mangrove shorelines. The Goliath is one of the few groupers that live in brackish waters, with juveniles commonly found in estuaries, especially near oyster bars. This stage lasts for 5 or 6 years before the juveniles move offshore to join adults on shallow reefs, in shipwrecks, and around bridge pilings and other structure. Goliath Grouper can live a long time, and 37 years is the oldest verified age on record.

Adults of the species typically inhabit areas that have rock, coral, and mud bottoms along with high-relief features such as ledges, caves, and holes that can provide refuge for a fish this size. They like both natural and artificial structure, and are often found under bridges and piers. Goliath Grouper are solitary fish, and adults are territorial near their areas of refuge, displaying an open mouth and quivering body to intruders, and sometimes producing an audible rumbling sound via muscular contractions of the swim bladder. This sound travels long distances underwater and is also used by the fish to locate other Goliaths.

Like other Groupers, Goliaths are ambush feeders that prey mostly on crustaceans such as spiny lobsters, shrimps and crabs. They also take barracudas, stingrays, parrotfish, octopus, and young sea turtles, engulfing their food with a quick snap of their jaws. Large Goliath Grouper will likely eat nearly anything that comes within their reach, and have been known to stalk and attempt to ambush divers.

Fishing for Goliath Grouper
These huge fish are more abundant in southern Florida than in the northern waters. Around Key West, Goliath Grouper can be found on nearly any type of wreck or other structure that has enough relief to provide shelter for a fish this large. It is easy to find juveniles along ledges and drop offs near mangrove islands. Goliaths are aggressive feeders and sometime snatch hooked smaller fish as they are being reeled in. They are fished like any other Grouper, with large baits dropped near the bottom.

The difference with the Goliath is the specialized ultra-heavy tackle that will be needed if there is to be any chance of bringing a fish alongside the boat. A broomstick-thick 130lb-class standup rod, a 30-80 size reel spooled with at least 300lb test, and a similar-sized leader terminated with a crimped-on 16-20/0 circle hook is the minimum rig needed. That still does not guarantee anything. Even a small 200lb pound Goliath will do whatever it wants, and with structure and shelter nearby, it is very difficult to avoid a breakoff.

Goliath Grouper can only be fished from a boat because it will injure the fish (and is illegal) to drag them up on a pier, bridge, or shoreline. Big Goliaths must be left in the water and released promptly, so most fisherman jump into the water for a picture with their trophy before cutting the leader and sending the Goliath back to its home.