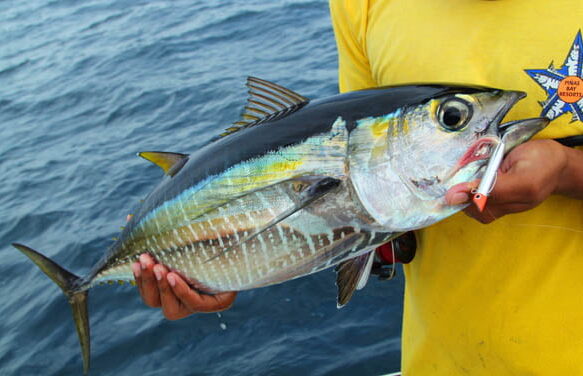 The Blackfin Tuna is an excellent light tackle species, with good speed and endurance in the fight and high-quality flesh for the table. They are the smallest of the Tuna species, but what Blackfin lack in size, they make up for in numbers and willingness to bite. (Florida Record: 45lbs 8oz)

Blackfin Tuna (Thunnus atlanticus)
The Blackfin gets its name from its bluish-black back and the dusky color of the second dorsal fin. The dorsal finlets are also dark, with white edges. The absence of yellow on these finlets distinguishes the Blackfin Tuna from all other tunas, but the dorsal finlets sometimes fade to yellow upon death. A bronze band runs along the side of the fish just below the black color border; this usually fades upon death. The lower sides are gray or silvery down to white on the belly.

The smallest of the tuna species, the Blackfin Tuna grows to a maximum of about 46 pounds and 42 inches long. Like other Tuna, the Blackfin has a streamlined, oval-shaped body made for high-speed swimming in open offshore waters. Blackfin Tuna have long, narrow pectoral fins that reach back almost to the area below the second dorsal fin. Stiff, short, symmetrically-opposed second dorsal and anal fins and rows of finlets on the upper and lower edge of the tail help provide stability at swimming speeds that can reach over 40mph. The stiff, broad, deeply-forked tail fin is a common characteristic of the genus Thunnus.

The Blackfin Tuna is a fast-growing, short-lived fish, and a five-year-old fish would be considered old. Most Blackfin caught in the early part of their fall migration past the Lower Keys weigh in the 18–22lb range. As they continue to grow in the warm Caribbean and Gulf waters, springtime fish weighing over 30lbs are common. Although Blackfin are primarily considered a game fish, they are fished commercially in some regions.

Blackfin Tuna Habitat and Behavior
The Blackfin is the only Tuna with a limited range – although it is a highly migratory species, it is only found in the Western Atlantic, sometimes as far north as the waters off Martha’s Vineyard, Massachusetts, but more usually from North Carolina south to Trinidad Island and Rio de Janeiro, Brazil. Blackfin Tuna are warm water fish, and they migrate to find their preferred water temperatures above 68°F.

Around Key West, Blackfin are a winter-season species, and the waters off the Florida coast are one of the best places to fish for Blackfin Tuna during the Fall, Winter, and Spring months. Large schools show up in the offshore waters in mid-November as the Gulfstream current moves close inshore and brings baitfish in with it. The fish gradually move into the Gulf of Mexico until the migration peaks in April.

Blackfin Tuna are schooling fish, and they often from large mixed schools with the Skipjack Tuna. Blackfin reach sexual maturity at 2 years, and spawn in the open sea during summer. Around Florida, spawning season extends from April to November, with a peak in May, while in the Gulf of Mexico spawning apparently occurs between June to September. Young fish are prey for seabirds, Mahi-Mahi, Skipjack Tuna, and members of their own species. Larger Blackfin are food for Blue Marlin and large Sharks. Blackfin of all ages rely on speed and schooling behavior to protect them from predators.

Blackfin schools hunt over reefs, around wrecks, and in bays as well as offshore. Blackfin feed both at the surface and in deeper waters, with larger fish tending to stay deep while smaller individuals feed at the surface. A wide variety of fish along with squid, shrimp, and crabs make up the bulk of the Blackfin Tuna’s diet. Blackfin overtake and engulf their prey whole, often catching fast species such as flying fish. Blackfin Tuna are also capable of straining food from the water, and young fish in particular eat tiny crustaceans, copepods, and plankton.

Fishing for Blackfin Tuna
Around Key West, Blackfin Tuna are found offshore in the Atlantic on deep wrecks and can be spotted following schools of Mahi-Mahi or large concentrations of baitfish. Key West charter fishing captains know the locations where Blackfin can be found, and often look for diving birds that signal bait on the surface with a school of Blackfin in pursuit. Gulf Shrimp Boat fishing trips are a very exciting way to get in the middle of large schools of Blackfin when the fish are in a feeding frenzy as the waste and by-catch tossed off the shrimp boats get the Blackfin biting fast and hard.

Blackfin Tuna can be taken by trolling or casting live baits such as ballyhoo, mullet, and other small fishes. Strip baits also work. Fishing deep wrecks with live baits and chum can be very productive. Blackfin will also hit spoons, feathers, jigs, or plugs when they are feeding on the surface, and are a favorite target of saltwater fly fishermen.

The meat of the Blackfin is a delicious treat when eaten fresh, and is a local favorite for sushi and sashimi. It is said to be at its best when eaten within 3–6 hours after being caught. Bleed the fish out immediately and keep it in icy salt water for the best taste. Blackfin Tuna is also excellent smoked, and tastes great grilled or broiled as steaks.