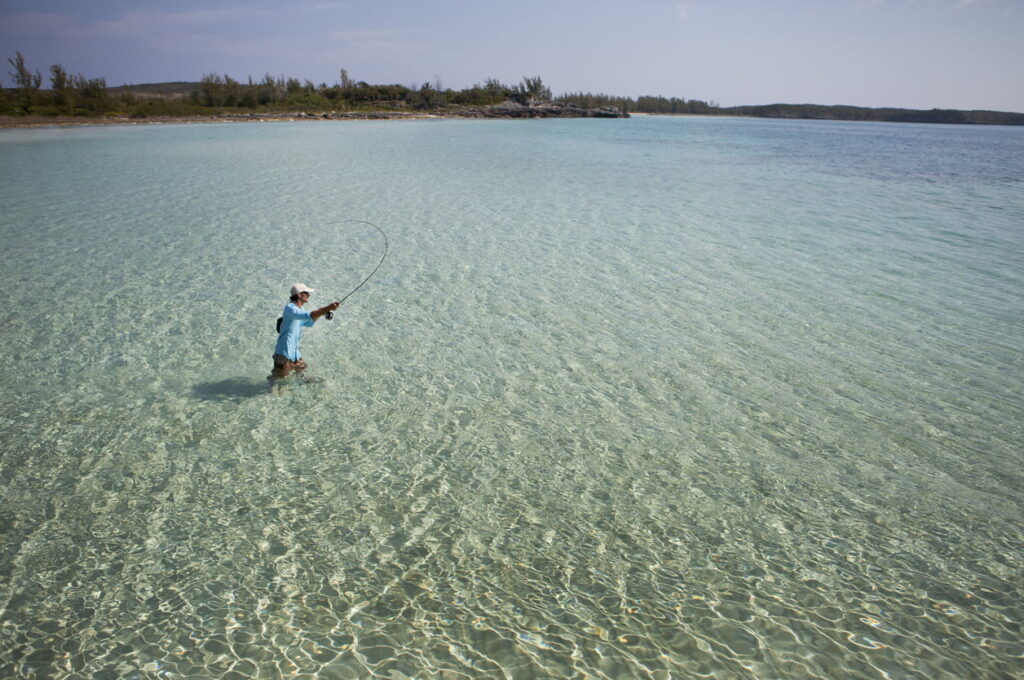 In the heat of July and the dog days of August, the Key West fishing focus tends to shift from the offshore waters to near-shore and Key West Flats fishing action. The Gulf Stream is swinging farther out to sea, taking the green water zone with it, so boats hunting big Mahi-Mahi or searching the waters for Blue and White Marlin will have to run far to hit the good grounds.

Key West charter captains still report fair action on the smaller schoolie dolphin fish in the 10-12 pound range – enough to provide some fun and put some delicious meat on the table. But the bigger fish are going to take a longer run out than most people (and sportfishing boats) will be up for.

Summer on the Key West Flats

Speaking of big fish, the Tarpon migration is also over for the most part, as the Silver Kings usually wind up their yearly travels shortly after the July full moon. However, there are still plenty of fish around Key West Harbor for anglers who are ready to get up and at them early, or sign up for a sunset trip.

Tarpon can be found in the shallows too, and for those who are dedicated to one of sport fishing’s ultimate quests, Tarpon on the Flats and the dead calm days of August on the horizon mean that the Keys Grand Slam season is on. Given that the Permit fishing has been good this summer, and the Bonefish are turning up in solid numbers, the chances of scoring hook-ups on all three species on one trip out to the skinny waters of the Flats are as good as they will ever get.

If you are after a Grand Slam, put together a Key West Flats fishing trip with the right guide, on the right day, and with favorable tides and a big dose of fisherman’s luck combined with some patience and skill, you can make your dream come true.

In other action around the island, dropping baits on the reef has been providing a good antidote for the slowing deep sea fishing, and for fishermen who would like to avoid the rougher water offshore.

The Mangrove and Yellowtail Snapper spawns get hot beginning around the July full moon, and many boats are returning to the dock with limits that include some big fish. Look for fish on the reef in about 80-125 feet of water. The Snappers will hit chunk bait, but live bait is the key to hauling up the big fish. Throw in some hookups on Mackerel and a few Jacks, and you have a day of fun fishing and a batch of nice fillets to stock the freezer with.

As always at this time of summer, the big buzz around Key West is the two-day recreational sport Spiny Lobster Mini-Season, held each year on the last Wednesday and Thursday in July. While there are some downsides to the arrival of some 30,000 “lobster mobsters” in the Keys, there is no doubting the excitement it brings to town.

If you want to go out for some of these delicious crustaceans, be sure to know your regulations: 6 lobsters per day per person, and you must have a measuring device with you in the water to make sure that each lobster measures 3 inches from the eyes to the start of the tail. Each fisherman needs a Florida Fishing License with a Lobster Stamp. The Mini-Season begins at midnight the first day, but divers are not allowed in the water until sunrise.

It is fun and interesting to dive for lobsters during the day, going underwater and poking along ledges and under coral heads to spot and capture the creatures by hand. The usual method involves using a “tickle stick” to reach in behind the lobster and startle it out of its den to where it can be grabbed with gloved hands. Nighttime lobstering is done with a net on a pole and a dive light that can be held underwater. In this “Bully Netting”, a lobster is spotted by the glow of its eyes and the net is dropped over it, startling the lobster into swimming up into it. The net is then flipped over and hauled up, hopefully with a nice lobster aboard.

If you dive for lobsters, remember to play it safe and use a diver-down flag. Flags on vessels must be 20×24 inches; flags on towed buoys must be 12×12 inches. All flags must have stiffeners to keep them unfurled and visible. Stay within 300 feet of the dive flag in open water, 100 feet when diving in a river, inlet or navigation channel.

Not only is the fishing good down here in July, there are a number of great special events that go off in Key West this month. Besides various opportunities to take in the 4th of July fireworks, the Key West Del Brown Invitational Permit Tournament draws dozens of top Flats fishermen and guides to town. The tournament is dedicated to the memory of Del Brown, one of the original Permit fly-fishing geniuses and an international star of the sport.

Then there is the Key Lime Festival, a 5-day celebration of citrus that starts on the 4th. And perhaps the most popular July event other than Lobster Mini-Season is the renowned Hemingway Days festival when Ernest Hemingway look-alikes, writers, anglers, and fans of the late author’s work converge on Key West for some serious partying. Hemingway lived and wrote on the island for most of the 1930s and the festival honors both the legacy of the American literary giant and his exuberant Key West lifestyle.

Come on down and catch some July Key West fishing action along with a taste of the exuberant Key West lifestyle for yourself. Book your Key West fishing trip the fast and convenient way with Fish Key West.