Fishing for Barracuda in Key West 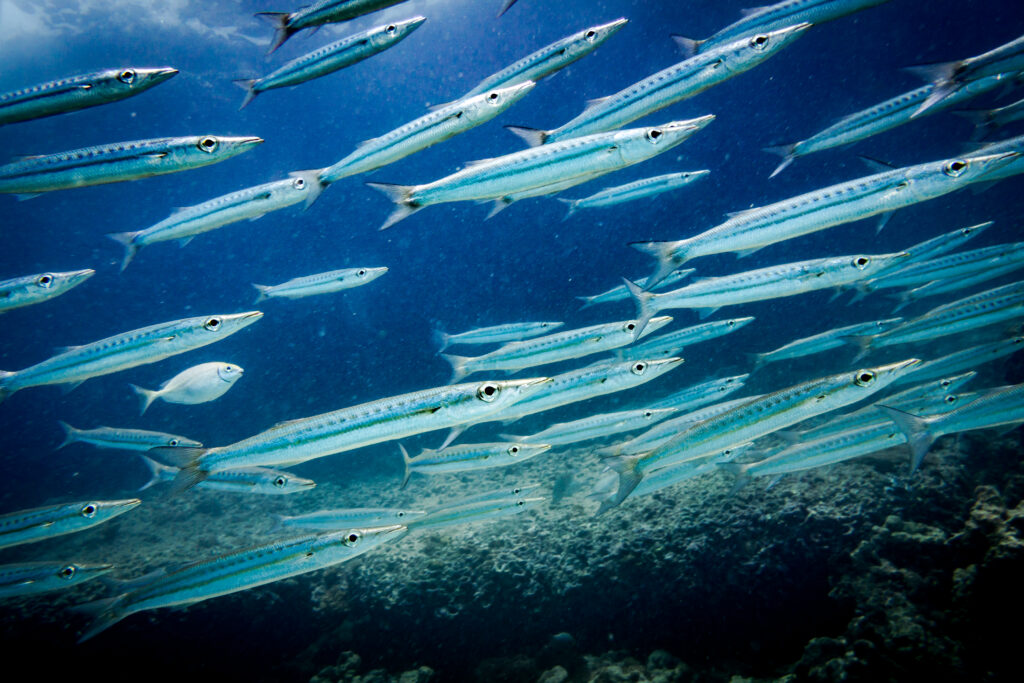 There are 28 recognized species of Barracuda found worldwide, and the two most commonly caught while fishing in Key West are the Southern Sennet (Sphyraena picudilla) and the Great Barracuda (Sphyraena barracuda), the largest of all Barracuda species. Like most members of the genus Sphyraena, Key West Barracuda are predators with an aggressive attitude that makes them a lot of fun as gamefish. (Florida Record: 67lbs [Sphyraena barracuda])

Barracuda (genus Sphyraena)
All Barracuda have similar elongated bodies with silvery-gray skin covered in tiny scales and various patterns of stripes and spots depending on the species and age of the fish. Dark gray, dark green, white, or blue on the upper body fading to silver on the sides and chalky white on the belly are common colors for the Barracuda. The fins may have a yellowish or dusky gray tint. A prominent lateral line extending from head to tail is common to all species of Barracuda, and some species have a blue-green or gray stripe along the lateral line.

Barracuda have pointed heads and long, powerful jaws equipped with rows of fang-like teeth. They have have 2 widely-separated dorsal fins on their backs and a forked tail fin that is wide in comparison to their bodies. That tail helps the Barracuda move at speeds over 25mph in short bursts. It is the Barracuda’s long, torpedo-like body, pointed head, and large jaws that set it apart from other fish. The lower jaw protrudes slightly in front of the upper jaw, and sharp teeth are clearly visible when the mouth of the fish is open.

The largest specimens of Great Barracuda, Sphyraena barracuda, can reach lengths of 6 feet and weigh over 100 pounds, but most types of Barracuda grow to lengths of 12 to 36 inches or so. Great Barracuda in the 36-inch range are common around deep wrecks and on the Backcountry Flats along the Keys. The largest sizes recorded for Sphyraena picudilla are a length of 24 inches and a weight of 2lbs 8oz. In the Keys, fish of 12-20 inches length are most often encountered. On Key West fishing trips, fish of both species are simply referred to as Barracuda.

Barracuda Habitat and Behavior
Barracuda are found in tropical and subtropical waters around the world. The Southern Sennet inhabits the western Atlantic from the waters around Bermuda south along Florida and the Bahamas to Uruguay in South America. It generally gathers in large schools, and prefers coastal waters, where it hunts over muddy bottoms and near rocky and coral reefs. Juvenile fish shelter in seagrass beds. Around Key West, the Sennet is generally less-common than the Great Barracuda.

Great Barracuda range from the Red Sea and around the coastlines of Africa to Hawaii and the Marquesas and Tuamoto islands, to the Western Atlantic where it has been recorded in Bermuda and from Massachusetts south throughout the Caribbean Sea to Brazil. Great Barracuda might be encountered anywhere from deep water in the open sea to shallows less than 2ft deep, but they are most common down to about 100ft. Capable of entering brackish water, Great Barracuda are sometimes seen in estuaries and murky inner harbors. They gather in small aggregations at times, but are usually solitary hunters. Juvenile fish prefer mangroves, estuaries, and shallow- sheltered inshore reef areas.

Little is known about the Barracuda reproduction cycle. The females spawn during spring, with spawning believed to begin around April in Key West waters. A female may spawn several times in a season, releasing about 5,000 to 300,000 eggs into the water where they are fertilized externally. The eggs float in the water column until they hatch, then the larval Barracuda take shelter in shallow water vegetation and only move to deeper water when they reach maturity.

Large Great Barracuda tend to be solitary, but smaller Barracuda form schools that may be seen around deep-water wrecks. Juvenile Barracuda commonly move in large schools, and divers sometimes see thousands of fish swirling around in a dramatic whirlpool fashion.

Barracuda are ambush predators that prefer to hide, dart out to hit their prey with a devastating strike, then turn to gulp down the pieces. They will eat almost anything but mainly prey on all types of bait fish and smaller reef fish as well as younger members of their own species. Barracuda attacks on humans have been reported; they usually consist of one quick strike that can cause serious damage but is rarely fatal. Some divers report that shiny objects such as rings or watches may provoke a Barracuda strike.

Fishing for Barracuda
In Key West, every wreck will hold large schools of Barracuda, and they are also commonly found around the channels of the Backcountry Flats. Juvenile Barracuda like to hide near the edges of mangroves. Barracuda are often caught during wreck- or reef-fishing expeditions, and are sometimes a nuisance fish that steals bait meant for other species.

On the Flats, Barracuda are a favorite target fish because they are easy to find and usually feed aggressively. They lurk near the mouths and along the edges of channels, under drop offs, along the edges of islands, and near any structure that holds baitfish and provides the Barracuda shelter for an ambush attack. Anything that imitates an injured baitfish will draw a Barracuda’s attention, and they hit hard on a variety of artificial baits including flies, plugs, and brightly-colored surgical tube baits called Cuda Tubes. A light to medium 7-foot spinning rod and saltwater reel spooled with 20lb braid is a good set up. Depending on the bait being used, a wire leader may be necessary. With artificials, use a fast retrieve to imitate a fleeing baitfish.

In the shallow water of the Flats, the hunting Barracuda is often visible to the fisherman and when a top-water lure is used the dramatic strike is very exciting. The fight often begins with the drag screaming as line is stripped from the reel when this powerful fish runs. More runs, jumps, and sometimes even charges at the boat follow as the angler matches strength with one of hardest-fighting gamefish in Key West.

Barracuda are eaten in many countries, and are delicious broiled, grilled, or smoked. Large fish should not be eaten due to the danger of ciguatera poisoning that comes from toxin that accumulates in the flesh of large Barracuda as they feed on smaller reef fish. Barracuda are covered with a thick, smelly slime and are very bony, so many Key West locals do not consider them to be good eating fish. When sportfishing in Key West, a battle with the Barracuda almost always ends with a live release because these fearsome predators are so valuable as a local sportfish resource.