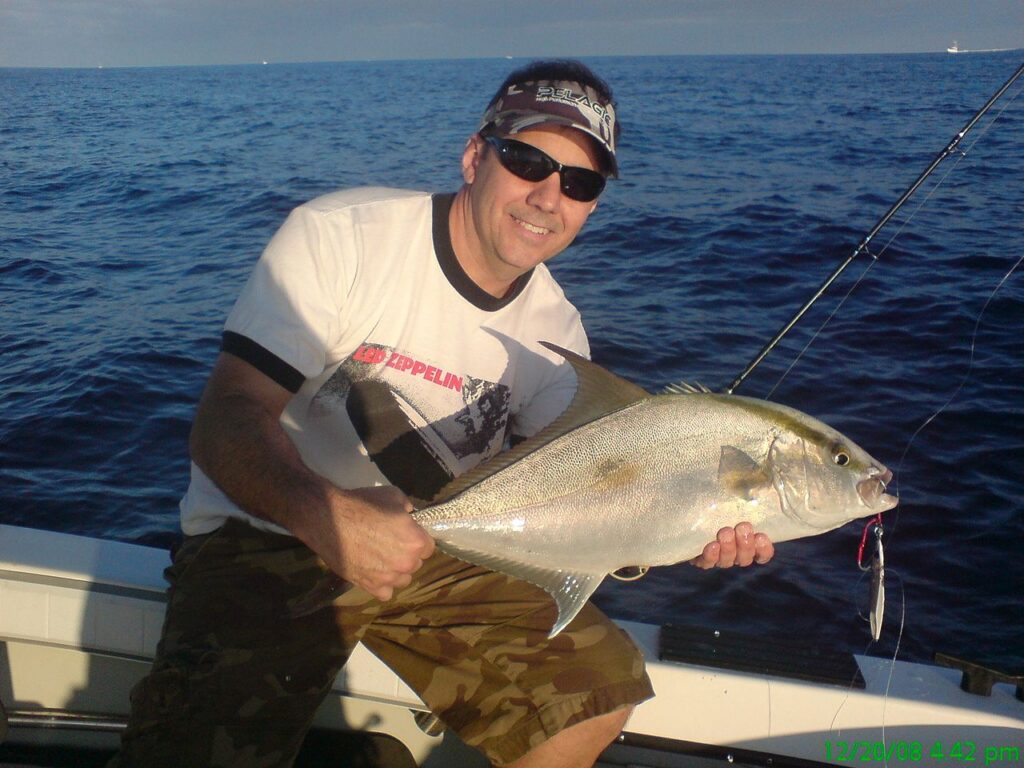 Almaco Jacks are strong fighters and very good to eat, so they are always a welcome catch among Key West sport fishermen. In fact, mariculture operations in Hawaii raise a fish known as Kampachi that is genetically identical to wild Seriola rivoliana and is prized in Japan and around the world for its flavor and texture as sashimi, in sushi, and cooked. (Florida Record: Not Eligible)

Almaco Jack (Seriola rivoliana)
The Almaco Jack is a member of the Jack family (genus Carangidae), which also includes Yellowtail and Amberjack. Almaco Jacks look very similar to other Jacks, particularly the Greater Amberjack, which is common around Key West in some of the same habitats as the Almaco. However, the Almaco Jack has a deeper, more flattened body than other Jacks, and the first rays of the longest part of the dorsal fin are nearly twice as long as the dorsal spines. The dorsal and anal fins of the Alamco Jack are also more sickle-shaped than the fins of the Amberjack. Almaco Jacks are typically around 3 feet long but may grow to 5 feet in length and up to 135 pounds.

Almaco Jacks are dusky-colored, sometimes with olive or lavender tones, and faint amber or olive stripes down their sides. The upper part of the body and the lower fins are usually dark brown or blue-green, with the belly much lighter and more brassy or lavender in color. Some fish have a dark bar running through the eye to the lower back, or an amber stripe extending from the eye back along the body.

Almaco Jack Habitat and Behavior
Alamco Jacks are widely distributed in tropical and temperate waters around the world. They live in the Western Pacific and Indian oceans, as well as around many of the Pacific islands. On the west coast of the USA, Almaco Jacks are found from California to Peru and the Galapagos Islands. In the western Atlantic Ocean, they range from Cape Cod to northern Argentina but are rare off of North and South Carolina.

The reproductive habits of the Almaco Jack are not well-documented. It is assumed that their spawning behaviors are similar to those of the closely-related Greater Amberjack. Spawning may occur offshore year-round depending on the latitude and water temperature. Juvenile fish are often seen far offshore around floating debris and associated with Sargassum weed.

Because Almaco Jacks have never been commercially harvested in significant numbers, they are quite abundant throughout their range. Almaco Jacks can be found in small groups on slopes and off of reefs in water from 20 to 500 feet deep, and they occur around shipwrecks more often than most other Jacks. Almaco Jacks are rarely caught in inshore waters. Almaco Jacks feed on small baitfish and squid during the day and night. They hunt in large schools and may drive baitfish into a ball then surround it and feed on the confused prey.

Fishing for Almaco Jack
The Almaco Jack is rarely targeted specifically but is instead usually caught when fishing for other game fish including Amberjacks over deep reefs and wrecks, especially on the Atlantic side of Key West. Almaco Jacks can most often be caught with squid tail jigs and other artificial baits that imitate squid or small fish, or small live baits fished at the depth where the fish are marked on the fish finder. Almaco Jacks are also very popular targets for spearfishermen.

The Almaco Jack has dense flesh that is quite similar to White Albacore Tuna when served as sushi. However, in some areas the fish may have many parasites, which many people find to be unappetizing even though they are harmless to humans. Despite this, the Alamaco Jack is famous as a delicious table fish, and Almaco Jacks are grown in commercial open-water fish farms as an alternative to wild tuna for the Japanese sushi market. They have one of the best feed-conversion ratios of any fish, with only 1.6 to 2 pounds of feed required to produce 1 pound of fish. Ocean Era, a Hawaii-based mariculture company, uses environmentally sound techniques to produce around 2,000 tons annually of the farm-raised Almaco Jack variety called Kampachi.