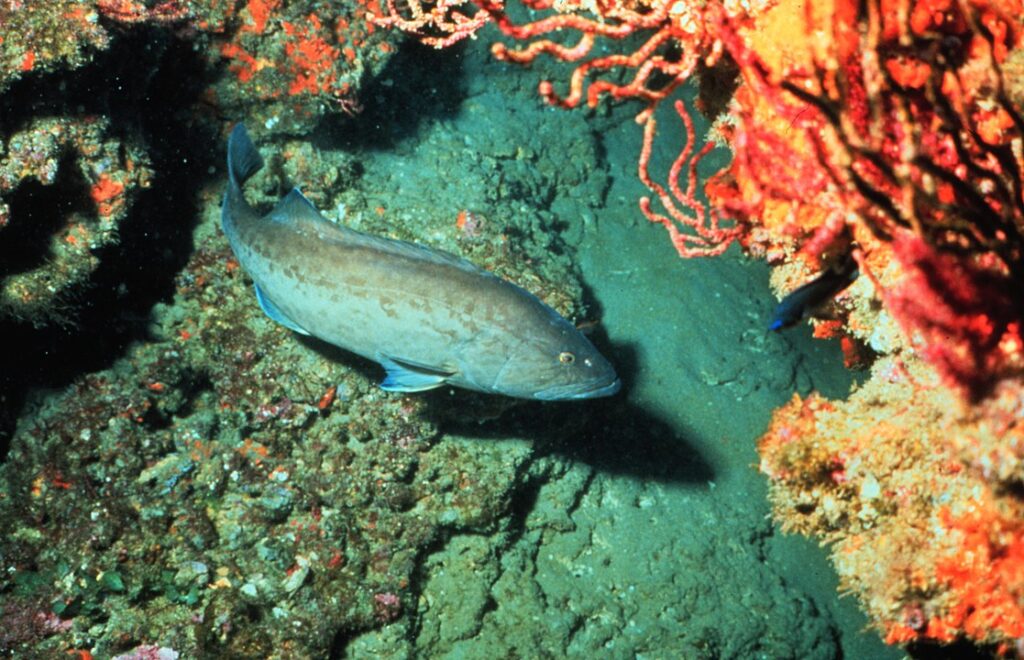 Gag Grouper, or simply Gag, are one of the favorite members of the Grouper family among anglers who enjoy Key West sportfishing. Gag are common around Key West, and especially in Gulf of Mexico waters, over a wide range of water depths and bottom conditions. Like most Groupers, they fight like bulldogs, break tackle, and cook up very nicely. (Florida Record: 80lbs 6oz)

Gag Grouper (Mycteroperca microlepis)
Like other Groupers, the Gag Grouper has a muscular elongated body, with a long head and large mouth. The lower jaw protrudes, and the mouth is equipped with well-developed canine teeth for holding prey. The tail fin is large and broad, with a slightly concave edge, and the pectoral fins are likewise broad, rounded, and very mobile. The pectorals are often used for maneuvering in tight shelter spaces, and in smaller fish, to wedge the fish in its hole.

Gag Grouper are known to grow to a maximum total length of 4.75 feet, with males reaching maturity at approximately 8 years of age and a length of 39 inches, while females mature at 5 to 6 years of age and 26 to 30 inches in length. The Gag Grouper can reach 50lbs on deep offshore wrecks and ledges, but 20- to 30lbs is the usual maximum, with most catches now falling between 2- and 12lbs due to years of overharvest of large males.

Gag Grouper Habitat and Behavior
The Gag Grouper is one of the most widely distributed of the Florida Groupers. It is found in the western Atlantic Ocean from North Carolina through the Gulf of Mexico to the Yucatan Peninsula. Gag Grouper also occur off the coasts of Bermuda, Cuba, and eastern Brazil, but are scarce around Bermuda. Juvenile Gag Grouper have been recorded as far north as Massachusetts.

Gag Grouper are protogynous hermaphrodites: born as females, they reach sexual maturity between ages 5 and 6 and spawn at least once before some individuals then change to males as they get older. This sometimes occurs as early as 5 years of age but more typically around 10 to 11 years. During spawning, Gag gather offshore in large aggregations from January through May in the Gulf of Mexico and Atlantic coastal waters from North Carolina to Florida. There is a major spawning ground on the west Florida Shelf in the Gulf of Mexico.

Eggs hatch after approximately 45 hours at water temperatures of 70ºF. After 40-50 days, the post-larval fish migrate to inshore seagrass beds, mangroves, oyster reefs, and salt marshes, where they remain for approximately 3 to 5 months before migrating to offshore reefs. Gag Grouper grow slowly, and the maximum recorded age for a Gag is 31 years.

Gag Grouper inhabit brackish as well as marine waters, with juveniles found inshore around seagrass beds, mangrove forests, and hard-bottom environments. Adults live inshore on rocky or grassy bottoms, and offshore on drop-off walls, reefs, rocky bottoms, and ledges to depths of 500 feet. They are also found on ship wrecks. Adult Gag Grouper may be solitary or gathered in schools of 5 to 50 individuals.

Like most other Groupers, adult Gag Grouper feed on fish, crabs, shrimp, octopus, and squid. They are ambush predators, camouflaging themselves, then rushing out at prey to engulf it whole with their large mouths. Juveniles measuring less than 8 inches in length feed on small crustaceans found in shallow seagrass beds. Gag Grouper are also cannibalistic and will eat smaller members of their own species.

Fishing for Gag Grouper
The Gag is a bottom feeder, and is often hooked while fishing for Snapper and other bottom-dwelling species. Like all Groupers, it strikes aggressively and fights hard at all depths, attempting to return to its shelter when hooked and often snagging or breaking the line in the process. In deep water, if the angler is not equipped with a heavy rod and line in at least the 20- to 30-pound range, there is little chance of bringing a Gag Grouper to the surface.

When not at extreme depths, the Gag provides good sport on spinning gear, and is the best of the Groupers for fly fishermen because Gag are frequently found in fairly shallow water and will eagerly take a large streamer fly. The best natural baits are live baitfish of various sorts including grunts, pilchards, pinfish, or squirrelfish. Dead baitfish and large cut baits also work well. Still fishing, drifting, and trolling can all be used to take Gag Grouper. When a school of large Gag Grouper is found, an angler may have the opportunity to mark the spot, anchor the boat and hook 10- to 20lb fish one after the other.

The Gag Grouper has flaky, white meat and is considered a delicious table fish. Because it is so popular, the Gag is subject to overfishing, so bag limits, open seasons, and fishing zones are heavily regulated, but catch and release fishing is always great fun.