Fishing for Permit in Key West 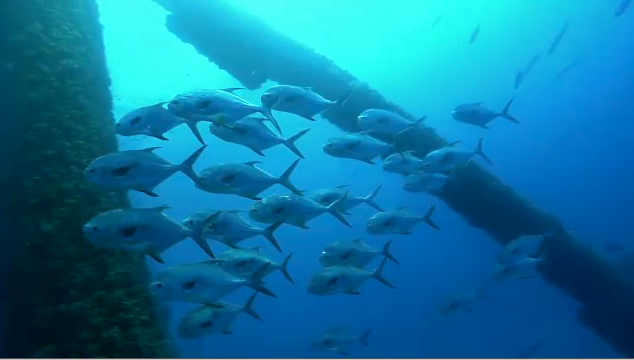 Hooking up with a big Permit on a fly rod is considered by many to be one of the ultimate fishing experiences.

Permit (Trachinotus falcatus)
(Florida Record 56lbs. 2oz.) The Permit is a member of the Jack family and one of the most highly prized of the nearshore saltwater gamefish. A blunt snout and head, laterally compressed body, long rear dorsal fin, and deeply forked tail are some of the Permit’s more distinctive characteristics. The fish has a round shape as a juvenile, and becomes more elongated as it grows into an adult. Permit can be large fish, reaching weights of 79 lbs. and lengths up to 48 inches. They grow rapidly during their first 5 years of life, and are commonly caught in the 25 lb. range.

Permit are smooth-skinned fish, bluish-green or brown on the back and bright silver on the sides. The belly may have a yellowish color and occasionally a black splotch, while the fins appear dark gray or black. Permit have large, rubbery lips and no teeth other than granular teeth on the tongue that are used for crushing hard-shelled prey against bony plates in the throat.

Permit Habitat and Behavior
Permit range the coastal waters of the western Atlantic from Massachusetts to southeastern Brazil. In US waters, the species is most abundant in southern Florida. Permit are often found in shallow, tropical waters where they feed on flats with bottoms of mud, sand, and seagrass, and frequent the holes and channels adjacent to these areas. Permit often hunt and feed in water depths of less than 2 feet. However, because they have the deep, compressed body typical to Jacks, large individuals cannot occupy waters as shallow as other Flats species like the Bonefish.

Permit often forage on the Flats by orienting in a head down position and using their hard mouths to root through the bottom substrate and stir up crustaceans and locate bivalves. They will also take crabs and shrimp that have been driven out of hiding into the water column by other bottom feeders like Rays and Bonefish. On the Flats, Permit are usually seen in small groups or pairs, or moving alone in the case of larger fish. In deeper waters up to 120 feet, Permit will gather in large schools over structures like wrecks, reefs, jetties, and piers.

Fishing for Permit
The challenge of hooking a Permit, as well as its hard fighting ability, are what make it one of the big three in the Flats Grand Slam along with Tarpon and Bonefish. Permit can be very spooky fish and picky feeders, requiring a stealthy approach and accurate casting to get even a chance of the fish eating your bait. They have some of the most acute eyesight of any fish. A poorly-presented bait is just as likely to cause the fish to flee as to feed.

Permit will take both sinking and floating flies in crab and shrimp patterns. They are also fished for with live crabs and shrimp. On the Flats, guides look for the tails and dorsal fins of feeding Permit, as they often project out of the water when the Permit is in the nose-down foraging position. This action is called “tailing”. The fisherman must then try to determine which direction the fish are heading and place the bait 3 or 4 feet in front of them, letting it sink to the bottom just as the fish get within visual range. When Permit school in deeper water over wrecks in the spring, they are a bit easier to catch simply by dropping live bait. Most Permit fishing in Key West is catch and release in order to preserve this prized fishery.