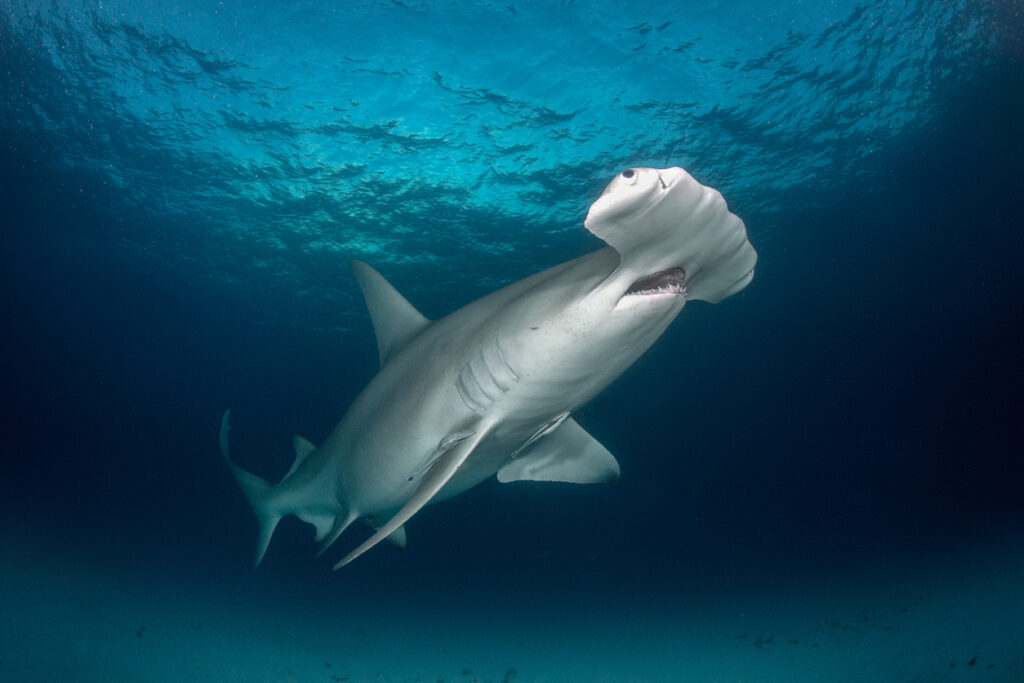 Hammerhead Sharks are frequently encountered in Florida Keys waters. It is always an exciting moment to meet one on the shallow Flats, where the large dorsal fin will be an unmistakable sign that the apex predator has arrived. If a big Hammerhead is hooked on heavy tackle, expect a long, hard fight, with a good possibility that you will be the one to say “Uncle” first. (Florida Record: 1063lbs 12ozs)

Hammerhead Shark (Sphyrna mokarran)
There are 3 species of Hammerhead Sharks–the Smooth, Scalloped, and Great Hammerhead. They are members of the family Sphyrnidae, from the Greek sphyra, or hammer, in reference to these Shark’s wide, hammer-shaped heads. In the case of the Great Hammerhead, its name also refers to the Shark’s large size, which approaches 1,000 pounds and 20 feet in length in some cases. All Hammerheads are dramatic-looking animals, and they have been roaming the seas since at least the upper Cretaceous Period 100 million years ago.

While the Great Hammerhead commonly grows to over 500lbs, the Smooth Hammerhead is a bit smaller, ranging between 8-12 feet in length (16ft maximum) and a maximum weight of 880lbs. The Scalloped Hammerhead is much smaller, with males reaching usually lengths of almost 6 feet and weights of about 64lbs, while the females may reach 8 feet and 177lbs. Maximum length for a Scalloped Hammerhead ranges from 12 to 14 feet, with females growing larger than males, and maxing out at 336lbs. All Hammerheads have long life spans, up to approximately 20-30 years of age.

Hammerheads are usually light gray with a greenish tint fading down to white on the belly. The hammer-like shape of the head, called the cephalofoil, is thought to have a number of functions. It may enhance the shark’s eyesight, providing 360-degree vision in the vertical plane, better binocular vision, and improved depth perception. Like all sharks, Hammerheads have electroreceptory sensory pores called Ampullae of Lorenzini, and the shape of the head distributes these pores over a broader area. This provides enhanced sensory perception, giving the Hammerhead an advantage as it sweeps the bottom for food using the broad head in a manner similar to the way a metal detector is used.

Hammerhead Shark Habitat and Behavior
All 3 species of Hammerhead have similar ranges worldwide in temperate water along coastlines and over continental shelves. Of the 3, the Smooth Hammerhead is found the farthest north, ranging into Canadian waters. The Smooth and Scalloped Hammerhead are primarily coastal and nearshore sharks, while the Great Hammerhead may be found far out at sea in waters over 1,000 feet deep.

The Great Hammerhead is considered to be highly migratory, moving poleward to cooler waters during the summer months. The Scalloped Hammerhead is known to gather in large schools for nearshore migrations. Some sites, including the Galápagos Islands in Ecuador, Cocos Island off Costa Rica, near Molokai in Hawaii, and the El Bajo seamount in the Sea of Cortez, are famous as gathering places for huge schools of Hammerheads. All 3 species of Hammerhead are found along the coastline of Florida and around Key West, but the Smooth Hammerhead generally does not enter the Gulf of Mexico.

Hammerheads reproduce once a year, and this usually involves the male shark violently biting the female until she submits to mating. As with other sharks, fertilization occurs internally, with the male transferring sperm to the female through one of two organs called claspers. The female then gives birth to live young in litters of 12-15 pups, except in the case of the Great Hammerhead, which may produce litters of 20 to 40 pups. The mother does nothing to care for her young, and the baby sharks huddle in a group and swim toward warmer water, where they will stay together until they grow large enough to be on their own.

Hammerheads have small mouths for their size, and seem to do much of their hunting on the bottom. While they may gather in schools during the day, they hunt alone at night. Hammerhead Sharks eat a variety of prey including crustaceans, fish, squid, octopus, and other sharks. The Great Hammerhead, as the larger and more aggressive of the species, will eat other Hammerhead Sharks, including their own young.

All three species of Hammerhead are known to eat many stingrays. The Sharks swim along the bottom at dusk, stalking their prey, and using their unique head to sense stingrays buried in the sand. The attack involves pursuing and pinning the stingray against the bottom while the Shark attempts to bite onto its prey’s wings. Rays are consumed entirely, including the dangerously sharp barbed spine in the tail, and Hammerheads have been found with as many as 50 stingray barbs in their stomachs.

Fishing for Hammerhead Shark
It is illegal to land a Hammerhead in Florida State waters, but ethical catch and release may be practiced. Hammerheads can be taken in Federal waters, but fisherman are encouraged to help preserve this important animal. Heavy deep-sea tackle and at least 60- to 80lb test line or heavier is needed along with 300 to 350-pound fluorocarbon leader leading into 6 feet of wire leader. For the trophy-sized beasts, a pro-quality big game reel filled with 200lb braid would be the way to go. The Hammerhead has a relatively small mouth for its size, so a smaller 16/0 circle hook is recommended and is the best for the animal’s survival after release. Be sure to choose extra-strong hooks, swivels, and other terminal gear.

Wherever gamefish are found, Sharks are also found. Hammerheads often follow schools of Tarpon, and may pick off hooked fish before they can be brought to the boat and released. Like most sharks, the Hammerhead will take large live or chunk baits fished near the bottom or thrown in front of them. Oily fish such as Mackerel, Tuna, or Trevally in a large size are good. And of course, a small stingray will work well for Great Hammerheads.

Evening is the best time to fish for Hammerheads, but if they are around and an easy meal is available, they can show up at any time. They may be caught deep while wreck fishing, or bait can be thrown at the Shark as it comes in to a chum trail or circles the boat looking for hooked fish. However it happens, when you hook up with a Hammerhead on your Key West fishing trip, be sure to have plenty of time set aside for the fight. And bring a lunch.