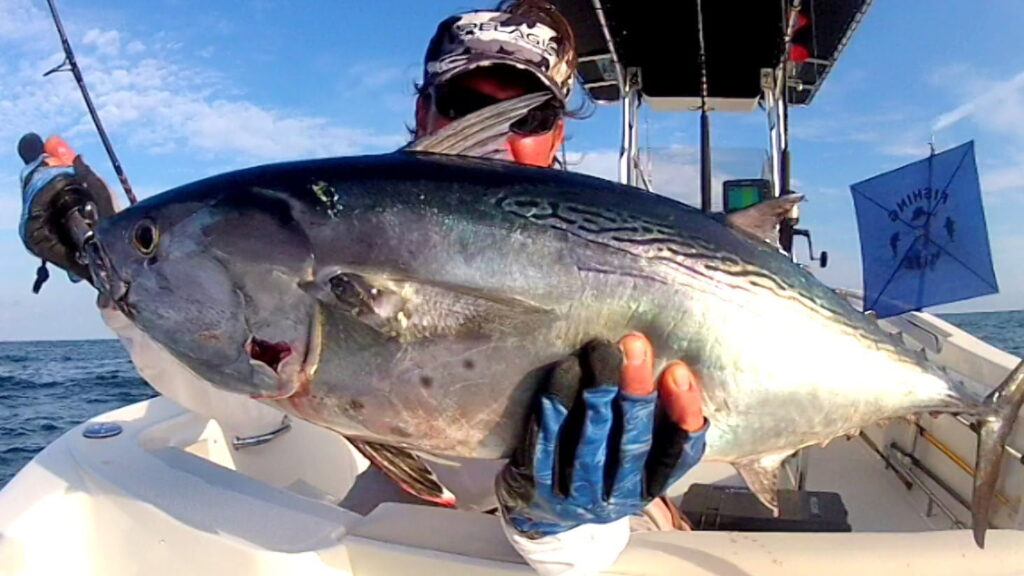 Hard-fighting and capable of 45mph runs, Little Tunny are known as one of the finest of the Atlantic sport fish species.

Little Tunny (Euthynnus alletteratus) Introduction
(Florida Record 27lbs.)
The Little Tunny is a member of the Scombridae family which also includes Mackerel, Tuna, and Spanish Mackerel. It is the most common tuna in the Atlantic Ocean. Little Tunny typically have metallic blue or blue-green backs, with dark ‘worm-like’ stripes above the lateral line. These stripes are within a well-marked border that never extends farther forward than the middle of the first dorsal fin. The sides lighten in color through silver down to a bright-white belly. In Florida waters, the Little Tunny is often confused with the Atlantic Bonito. The 3–7 dark, fingerprint-like spots around the pectoral and pelvic fins of the Little Tunny are the easiest way to distinguish it from the similar-looking Bonito and Skipjack Tuna. The first ray of the dorsal fin of the Little Tunny is taller and more vertical than that of the Bonito. Little Tunny are also bigger than Bonito, averaging about 15 lbs. In the Atlantic, Little Tunny reach a maximum length of about 35 inches.

Little Tunny Habitat and Behavior
Little Tunny are found worldwide in tropical to temperate waters. In the western Atlantic, they range from Massachusetts south to Brazil and are found in the Gulf of Mexico, Caribbean Sea, and Bermuda. Along the North American eastern coastline, Little Tunny often travel in large schools. Schools are formed by fish size rather than species and other Scombridae such as the Atlantic Bonito may be present. Little Tunny generally live much closer to shore than most other tuna species. They live in places where large schools of baitfish such as sardines and menhaden are found, including inlets, and around points, jetties, and sandbars. It is unusual to find Little Tunny in the brackish water of estuaries. Although they migrate through coastal waters south in the winter and fall and north in the spring, Little Tunny are not as migratory as other tuna species.

Little Tunny primarily feed on small fish and invertebrates. They particularly like schooling fish such as the Atlantic bigeye and largehead hairtail. Smaller fish eat many crustaceans, along with anchovies, sardines, and squid. Their diet changes with seasonal food availability and Little Tunny have also been observed to have nocturnal feeding habits.

It takes approximately 3 years for Little Tunny to reach sexual maturity at an average size of 15 inches. In the Atlantic, they spawn during the months of April through November in water that is at least 77 °F. The major spawning areas are offshore in waters 100 to 130 feet deep. During a single mating season, females can release 1.75 million eggs in multiple clutches, with males releasing sperm to fertilize the eggs in the water column.

Fishing for Little Tunny
As with many inshore gamefish, the presence of Little Tunny is usually indicated by flocks of birds diving and feeding in coastal waters as they follow the schools of feeding fish. When located, Little Tunny can be caught by trolling or floating bait or lures, or by casting into the mass of feeding fish, which will hit nearly anything that comes their way. Trolling small lures baited with mullet or ballyhoo or dressed with colored feathers will work well, as will casting small, brightly-colored metal lures that imitate the small baitfish the Tunny are feeding on.

Little Tunny are considered to be one of the finest Atlantic sport fish because they are hard fighters when hooked, and can strip line off the reel with 45 mph runs. They are generally not considered to be good eating fish, but are often used as bait to catch other species because when cut Little Tunny release a lot of oil into the water to create a scent trails, and the tough flesh stays on the hook well. This is why Little Tunny is often used for Shark fishing.