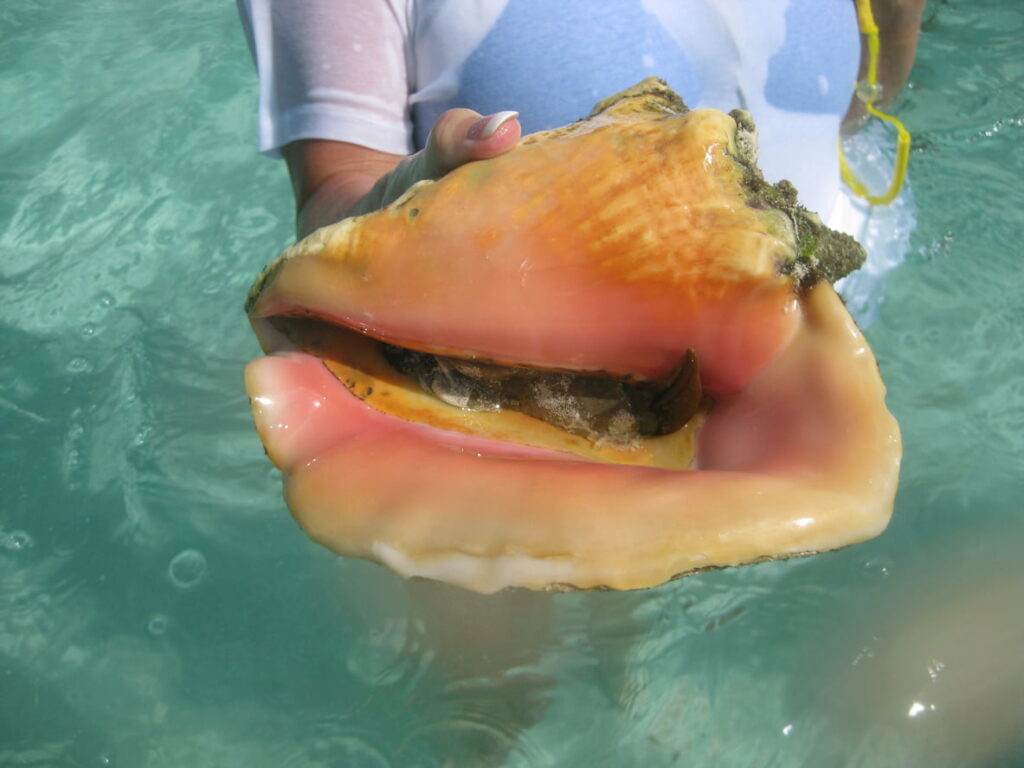 Besides being a nickname for Key West natives, Conch are fast-growing marine snails that feed on algae. Although the term is generally applied to several types of large sea snails, true conches belong to the family Strombidae, specifically the genus Strombus and other closely related genera such as Eustrombus.

The larger types of Conch found in the Carribean, such as the Queen Conch, can grow from tiny larvae into adult snails weighing about 4.5 pounds in 4 years. Conch move from shallow water into deeper waters as they grow, then return to lay eggs in the shallows.

A conch’s shell grows in a spiral pattern with bumps around the outer surface. When they are small, these bumps are long and spiky, which may confer protection against predators and/or stabilize them in moving water. These bumps become less pronounced as Conch grow, possibly because the larger shell provides more protection and/or their greater mass keeps them steady in the water. As the Conch matures, the body of the snail pushes on the growing shell and makes the opening flare out. This allows the mature snail to move along with lagoon floor with the shell opening flat against the bottom.

Conch is the second most popular type of edible snail after the Escargot, and the meat can be eaten raw, as in salads, or cooked, as in fritters, chowders, gumbos, and burgers. In The Bahamas, where Conch is considered to be the country’s main dish, it is typically served as fritters and salads. When British loyalists who had fled the early United States for the British colonies in the Bahamas during the revolutionary war years returned as settlers to Key West, they brought with them the nickname “Conchs” in reference to the prevalence of Conch in the Bahamian diet.