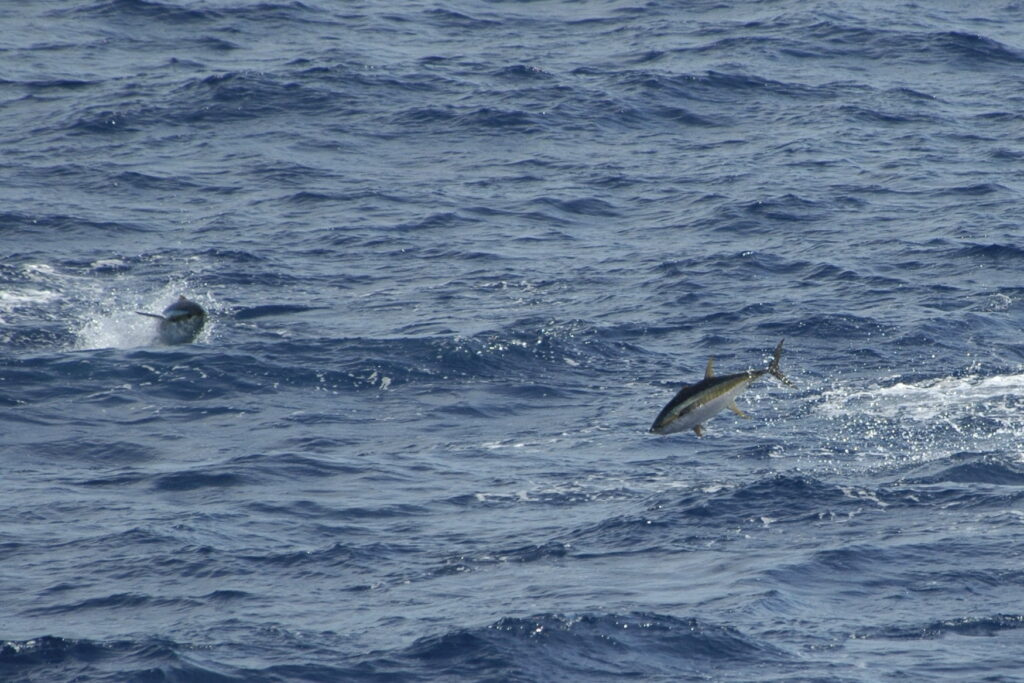 The Yellowfin Tuna is a delicious, hard-fighting fish that is sometimes caught when fishing deep waters off the Florida Keys.

Yellowfin Tuna (Thunnus albacares)
(Florida Record 240lbs.) The Yellowfin Tuna is one of the larger Tuna species and often reaches weights in the 100-pound range. Yellowfin are prized for their sashimi-grade meat and are often marketed as ahi, from the Hawaiian ʻahi, a name also used for the closely related Bigeye Tuna.

The Yellowfin is a very strong and fast fish, capable of speeds up to 50 miles per hour, and known to migrate thousands of miles across open ocean waters. Unlike most fish, the Yellowfin is warm-blooded and this is what gives it such muscular power. Like other Tuna species, the Yellowfin has a streamlined torpedo-shaped body that is almost pure muscle. The body of the fish is a very dark metallic blue that changes to silver on the belly. About 20 vertical light-colored lines appear on the sides and belly of live Yellowfin.

Yellowfin Tuna Habitat and Behavior
The Yellowfin Tuna is found in pelagic waters of tropical and subtropical oceans worldwide. They mostly range in the top 330 feet of the water column but are capable of diving to considerable depths. Mainly found in deep offshore waters, Yellowfin approach shore when suitable conditions exist. They can be found feeding on baitfish concentrated around Mid-ocean islands such as the Hawaiian archipelago and other Pacific islands as well as the volcanic islands of the Atlantic such as Ascension Island and Saint Helena. Yellowfin may be found well inshore of the continental shelf when water temperature and clarity are suitable and food is abundant.

Yellowfin Tuna often travel in schools with similarly-sized fish and are found with other Tuna species. Mixed schools of small Yellowfin and Skipjack Tuna are common. In Florida Keys waters, Yellowfin are usually an accidental catch when targeting Blackfin Tuna or Mahi-mahi, and they often break off the light tackle used for these smaller species. Yellowfin are also encountered in the Keys when fishing deep for Swordfish or Wahoo.

Yellowfin Tuna prey on other fish, pelagic crustaceans, and squid. Like all Tunas, their speed enables them to pursue and catch fast-moving baitfish such as flying fish, sauries, and mackerel. Large Yellowfins prey on smaller Tunas such as Frigate Mackerel and Skipjack Tuna. Yellowfin Tuna are preyed upon when young by larger Tuna, seabirds, and predatory fishes such as Wahoo, Shark, and Billfish but adult fish are only threatened by the largest and fastest hunters such as toothed whales, pelagic Sharks like the Mako and Great White, and large Blue and Black Marlin.

Fishing for Yellowfin Tuna
Yellowfin Tuna are not commonly targeted on Key West fishing trips, but lucky fisherman run into them when fishing deep water structure for Blackfin Tuna and other offshore species like Wahoo and Marlin. Yellowfin are known to follow floating debris like pallets and logs which is why they are sometimes caught when fishing for Mahi-mahi.

Trolling various types of streamer and squid-imitation lures can be productive for Yellowfin, and chumming while anchored over deep banks can work well and also bring in Wahoo and the smaller Blackfin Tuna. Watching for flocks of birds over schools of Skipjack and Blackfin Tuna then dropping live bait deep underneath the smaller fish may result in a Yellowfin hook up. They are also caught while kitefishing for Sailfish or deep-dropping for Swordfish.

Like other Tuna, the Yellowfin has a bullet-like shape and powerful, muscular body that make it pound for pound one of the strongest, hardest-fighting gamefish out there. Only big Billfish come close to Yellowfin for pulling power, so if you hook one of the rare Yellowfin Tuna found around Key West, count yourself lucky and hold on tight.