Fishing for Hogfish in Key West 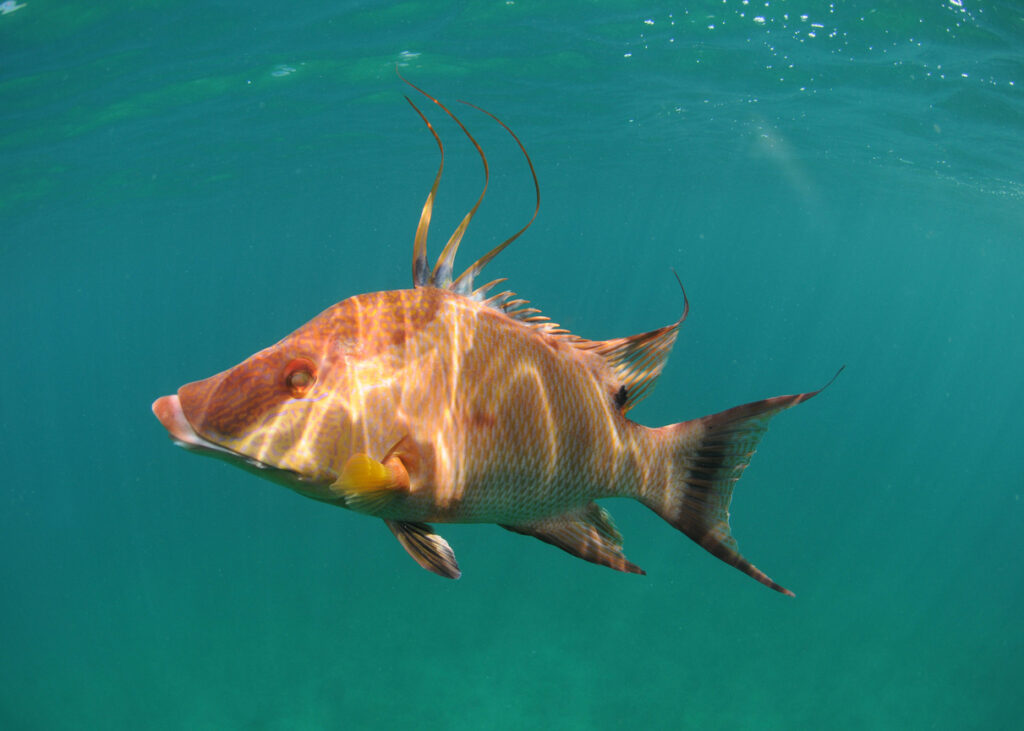 The Hogfish is one of the more exotic-looking reef fish encountered when fishing in Key West. A large bottom-feeder, Hogfish are popular with spear fisherman. They are most often caught on hook by accident while bottom fishing for other species but can be successfully targeted on light tackle. (Florida Record: 19lbs 8oz)

Hogfish (Lachnolaimus maximus)
The Hog Snapper, or Hogfish, is a large species of wrasse that is easily identified by its long, hog-like snout and extendable mouth, which allow the fish to feed on bottom-dwelling mollusks and crustaceans. The Hogfish gets its name from using its elongated snout to root for crustaceans buried in the bottom sediments. It is closely related to the Parrotfish, but is the only known member of its genus. While most wrasses are generally small and cigar-shaped, Hogfish are large, with high backs and round, laterally compressed bodies.

The Hogfish has a distinctive moon-shaped tail with trailing spines on the top and bottom edges. The first three spines of the Hogfish dorsal fin are long, thick, and also trail behind the fin. The coloration of the Hogfish varies with age, sex, and habitat. They are generally pearl white to mottled brownish-red, with a black spot at the rear base of the soft dorsal fin. Young fish and females are primarily pale gray, brown, or reddish brown with a paler underside. Males are usually more intensely colored than females, with a dark band extending from the snout to the first dorsal spine and a characteristic dark spot behind the pectoral fin. The eye of the Hogfish has a bright red iris.

Hogfish Habitat and Behavior
The Hogfish is native to the western Atlantic Ocean and occurs in tropical, subtropical, and warm temperate waters from Bermuda south to Brazil. It is found throughout the Caribbean Sea and the Gulf of Mexico, where it is very common in shallow waters around the Caribbean islands and off Florida. Southeastern U.S. waters are home to three stocks of Hogfish: the Georgia to North Carolina stock, Gulf of Mexico stock, and Florida Keys/East Florida stock.

Like many wrasses, the Hogfish are protogynous hermaphrodites that start out as female and then mature to become male. This change usually begins to occur when the fish are about 3 years old and 14 inches long. It is thought that sex changes are socially mediated and that all fish over 10 years old are males. In south Florida, spawning occurs from November through June. A Hogfish male will gather a harem, protecting and mating with a group of females in his territory. Spawning occurs in late afternoon and early evening, and involves courtship behavior between male and female. This is followed by a rush towards the surface, during which the male and female release gametes into the surrounding water, where fertilization takes place.

The fertilized eggs hatch into pelagic larvae approximately 24 hours later. The planktonic larval stage lasts several weeks, after which the juveniles settle out of the water column onto suitable habitat. They are commonly observed in nearshore waters in estuaries and around seagrass beds or shallow reefs. Juvenile hogfish have a laterally-compressed oval profile, and are reddish in color with faint vertical bands. As they grow, juveniles gradually move offshore, and adult Hogfish are often associated with reef and patch coral habitats. Hogfish grow to a maximum of 36 inches in length and about 24lbs in weight, and have been recorded to live for 23 years.

Hogfish usually live in small groups, foraging on open bottoms and around coral reefs at depths of 10 to 100 feet. They are often encountered in the same habitats that support gorgonians, a type of soft coral sometimes called the sea fan or sea whip. Hogfish prefer hard sand and rock bottoms, and are widely distributed along the edges of reefs, where they inhabit patch reef areas just inshore and offshore of the main reef. Larger individuals will generally occur in the main reef area, with smaller fish residing among the patch reefs.

The Hogfish is a bottom-feeding predator that forages by day. Hogfish shove their snout into the sand to search for prey, which they crush with strong jaws that contain protruding rear canine teeth that are well adapted for handling hard-shelled prey items. Juvenile hogfish thrive on a diet of small crustaceans, mollusks, and seaworms. Adults feed mainly on mollusks including clams, snails, and tusk shell mollusks, but they will also feed on hermit crabs and sea urchins.

Fishing for Hogfish
Hogfish are very popular targets for spearfishing. However, because they tend to root through the bottom sediment in search of small prey rather than pursuing baitfish, they are not commonly caught on hook and line except as occasional by-catch when fishing for other bottom-dwelling species. That said, there are some anglers who know where to find and target Hogfish on hook and line by using baits like shrimp, small crabs, or chunks of clam or other mollusk.

In both Atlantic and Gulf waters around the Keys, hogfish can be found on sandy bottoms around reef fringes, coral patches, wrecks, and rock outcroppings. If available, live shrimp and/or sand fleas are the ideal bait, and a medium to heavy spinning rig with 20lb test line should be used. A lighter 3- or 4-foot fluorocarbon leader will help evade the Hogfish’s keen eyesight.

Circle hooks are required for reef fish as per Florida regulations, and even though the Hogfish has a huge mouth, a 2/0 or smaller hook should be used to handle the small bait. A slip-sinker setup works best–use an egg sinker large enough to reach the bottom quickly. Or try the popular Hogball jig in various colors until the right formula is found. Another trick is to lower a frozen chum block of mixed crustaceans to the bottom. When Porgies, Snappers, Grunts and other small bottom fish swarm, Hogfish often follow.

The Hogfish has a strong, flat body that makes even small fish exceptional fighters, and they are considered to be a delicacy in the Florida Keys. Flaky texture and a sweet-rich flavor similar to Scallops have earned the Hogfish a place on the menus of most restaurants in the Keys.