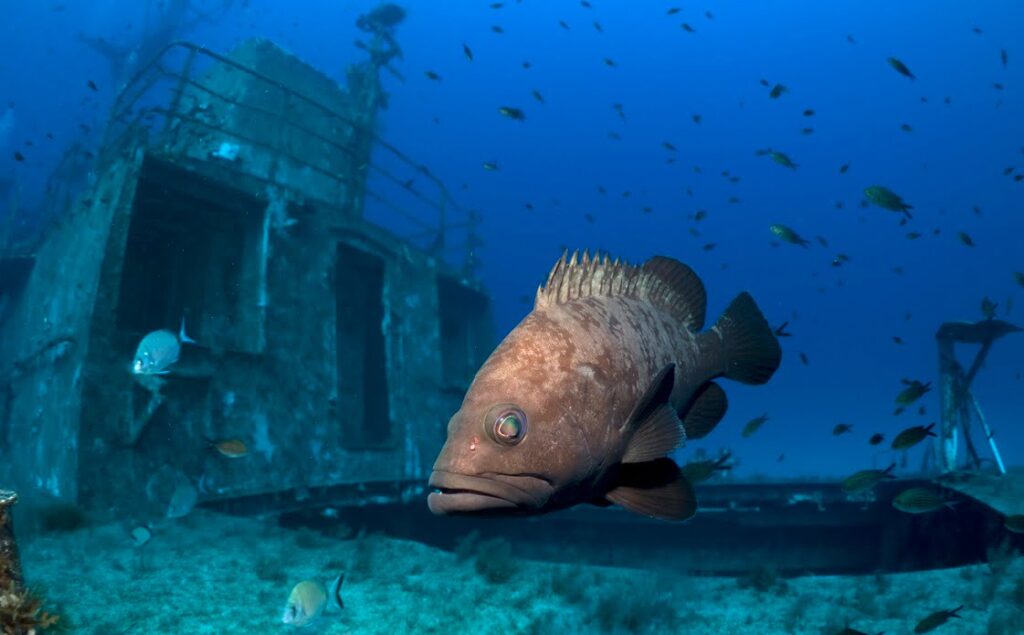 When the fall transition comes on here in the Florida Keys, we get cold fronts moving in from the north every few days. The weather change sparks increased intensity in the Key West fishing action, particularly on the reef and in the Flats and Backcountry waters. In fact Key West October Fishing is some of the best of the year.

Captains on the Key West charter fishing boats have been reporting fast action and well-mixed fish boxes off the wrecks both deep and shallow. Amberjack, Barracuda, Blackfin Tuna, Cero Mackerel, Cobia, Mutton Snapper, Yellowtail Snapper, and of course plenty of Sharks have been hitting live Ballyhoo and Bonito chunks.

And when you talk wreck fishing (or reef fishing), you are talking Key West Grouper fishing. There have been some nice limits of Black Grouper coming off the wrecks lately, the reefs have been giving up Blacks along with a few Reds and Yellowfins, and we are only getting deeper into the best time of year for this popular sport and table fish.

This is one of several October reports dedicated to a closer look at one of the easiest Key West sport fish to find and catch; pound-for-pound one of the strongest there is when hooked, and one of the tastiest to eat. Throughout the Gulf and Atlantic waters off Florida, the various species of Grouper may be some of the most commonly targeted fish out there, and, once you learn more about this exciting bottom-dwelling game fish, you just may want to come down and give Key West Grouper fishing a try.

The Grouper is a very popular sport and food fish throughout the tropical waters that are home to most of the 60 or so Grouper species. Members of the 25 species of Atlantic Grouper are found primarily along the southeastern US coastline and down into the Caribbean. They are favorite targets for bottom fisherman, and some sources claim that Grouper is the most popular saltwater table fish in the USA.

In the waters around Key West, there are a few Grouper species in particular that are very commonly caught at a range of depths and around a variety of structures. One of the most common is the Gag Grouper. Depending on its life stage, the Gag Grouper can be found in both brackish and marine waters, inshore around sea grass beds, mangroves, and on hard-bottoms, or offshore on drop-off walls, rocky bottoms, and ledges to depths of 500 feet.

The Gag Grouper can reach 50 lbs. on deep offshore wrecks and ledges, but 20 to 30 lbs. is the usual maximum, with most catches now falling between 2 and 12 pounds due to years of overharvest of large males. The Gag is a bottom feeder, and is often hooked while fishing for Snapper and other bottom-dwelling species. In deep water, if the angler is not equipped with a heavy rod and line in at least the 20 to 30 pound range, there is little chance of bringing a Gag Grouper to the surface.

The Black Grouper is another common sight on Key West charter fishing boats. It runs bigger than the Gag Grouper, and it is common to catch Blacks that are a little over 2 feet long. They can live over 30 years, reaching up to 52 inches long and weighing up to 179 pounds. The current Florida Record for Black Grouper is 113lbs, 6oz. Like all Groupers, adult Blacks are found around relatively high-relief bottom structure, and they are plentiful on the shallower wrecks around Key West.

The Red Grouper is found in a wide range of depths from 16 to 1,083 feet, but intermediate-aged fish prefer the crevices and ledges of rocky coral reefs in 20 to 75 feet of water. Around Key West, Red Grouper will inhabit almost any reef or wreck in water up to about 120 feet deep. They also hang around the edges of the patch reefs along with Black and Gag Groupers. A common catch on reef fishing trips, the Red Grouper’s relatively shallow and easy-to-hunt habitat also makes it a popular fish with spear fishermen. While many species of Grouper are solitary, Red Grouper in Key West waters can often be found in large schools. As a dominant predator on the reef, the Red Grouper is very important to the overall health of the reef environment.

Although it is not a true Grouper, but rather a member of the Sea Bass family, no discussion of Key West Grouper fishing would be complete without mention of the amazing Goliath Grouper. At sizes up to 800 pounds, common in the 200-300 pound range, and with no natural predators when grown, this beast is the undisputed king of the reefs and wrecks.

Goliath Grouper typically inhabit natural and artificial reefs in water depths of 16 to 160 feet, preferring areas that have rock, coral, or mud bottoms, and high-relief features such as ledges, caves, and holes. Around Key West, Goliath Grouper will be found on the larger shipwrecks, and the famous Air Force Towers out in the Gulf are known to hold large numbers of Goliaths.

Like all Grouper, the Goliath Grouper preys mostly on crustaceans such as spiny lobsters, shrimp, crabs, squid, and octopus. Also like other Groupers, Goliaths engulf their food with a quick snap of their jaws, and most prey is swallowed whole. The difference is that these monsters easily take large food including barracudas, stingrays, parrotfish, octopus, and young sea turtles.

In fact, a big Goliath Grouper will likely eat nearly anything that comes within its reach, and they have been known to stalk and attempt to ambush divers. So choosing bait for these fish is no problem, but a fisherman needs specialized ultra-heavy tackle to have any chance of bringing a Goliath to the boat. And, since these fish are completely protected with a ban on all harvest, most fishermen jump into the water for a picture with their trophy before cutting the leader and releasing the Goliath back to its home.

The Grouper is a very common resident of tropical waters, and there are quite a few other Grouper species that can be found off the Atlantic and Gulf sides of Key West. Scamp, Nassau, Rock Hind, Red Hind, Yellowfin, Yellowmouth, and, in deep waters, the Snowy and Yellowedge Grouper are some of the more commonly known species. All are fun to catch and good to eat.

Some Grouper fishing should be on every angler’s bucket list. Our special Key West Fishing Guides to Grouper Fishing will help you learn how to rig up and go after Key West Grouper. Use Fish Key West to help you plan a Key West October fishing trip now and get your chance to go after the amazing Grouper.