Snapping Sharks, Gangs of Groupers – Key West Fishing in the Fall is the Best 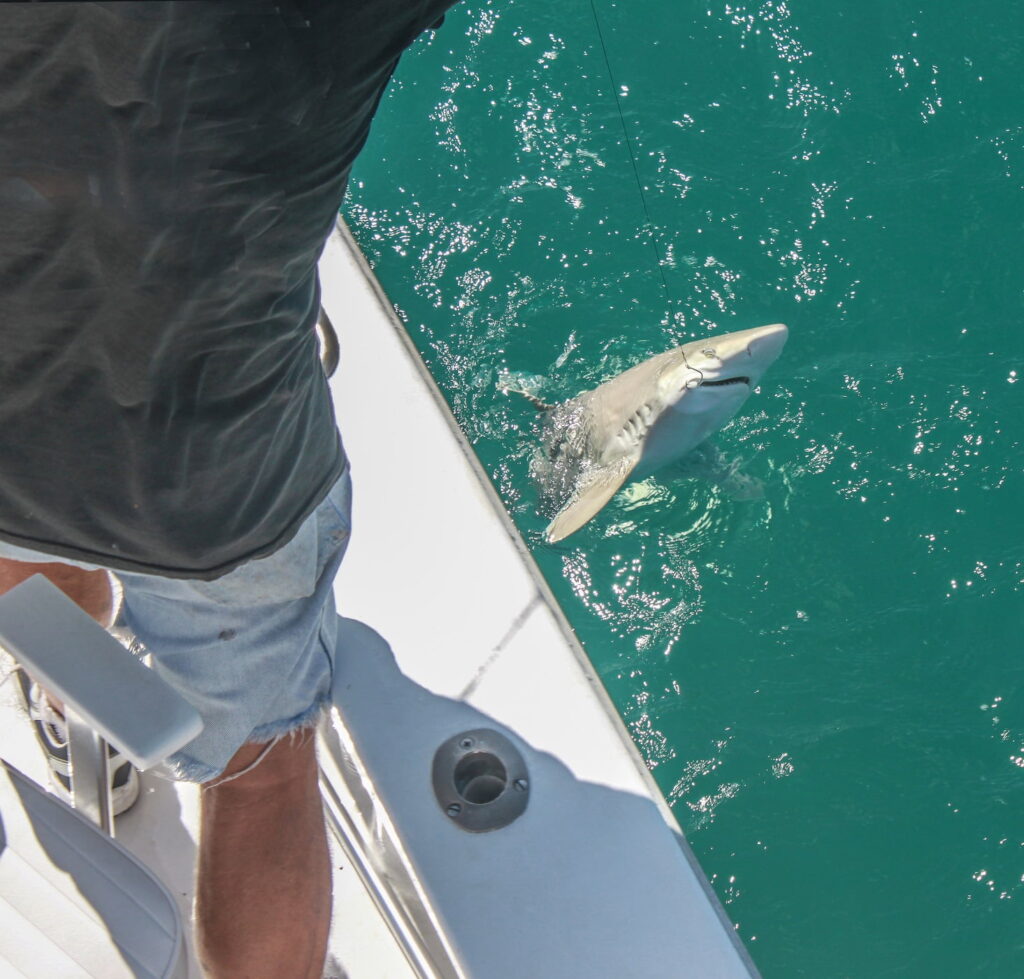 Fall is kicking into high gear in Key West as we go into the tail end of what some people call our monsoon season – May through October, and hit the prime time for tropical depressions to be swinging through the Keys and the Gulf region. Temperatures usually stay in the lower 80s this time of year, making it a bit more pleasant for going fishing. However, with breezy weather and thunderstorms prevalent, offshore fishing days have to be chosen carefully.

Nonetheless, we also like the shifting tropical weather movements, even the storms and high winds, for stirring up the water, cooling it down, and getting many different species of fish on the move and feeding, making for the excellent Key West fall fishing we enjoy.

Despite the seasonal weather slowing things down a bit, we have some good offshore days in early fall, with all-you-can catch Bonito on offer. With all the Bonito available, it is the obvious choice for feeding some toothy predators: chum and big bait chunks made from these succulent, oily fish are all it takes to get the Sharks chomping hard. Key West charter fishing captains go out and hit the deep wrecks to put their fishermen on big Black Tips, Bull Sharks in the 200-300 pound range, and some large Lemon Sharks as well.

The east-bound Florida Current sweeps through the Florida Straits to feed the Gulf Stream and in fall it picks up speed and pulls in closer to the reef. On the low-wind days when boats can venture out to the edge of the current, we get Wahoo and few big Mahi-Mahi (Dolphin Fish) coming to the docks. And with the water cooling and big schools of Ballyhoo stacking up to come through the reef toward warmer shallow water, the action on Yellowtail Snapper and other reef species is only going to get hotter as the season goes on.

Sometimes September brings us a few days of rain combined with low to no wind, at least in near shore waters. Fishermen willing to brave some wet weather might find these conditions conducive to finding some Tarpon rolling on the Flats, or tossing a shrimp at the legendary Key West Bonefish. The low barometric pressure that occurs during these passing weather patterns often stimulates fish to feed more actively, and the raindrops hitting the water can provide some camouflage for the splash your bait makes when it lands in front of the fish.

For those who prefer to remain drier than the fish, the warmer summer-like days that are still scattered into the fall weeks are also good for hunting Bones on the Flats. Throwing a live shrimp, a bucktail jig sweetened with a little piece of shrimp, or a shrimp or crab pattern fly are all fine ways to try for a fall hookup with the Gray Ghost of the Flats.

Fall Action Picks Up in Town

As we get later into fall in Key West, the typical round of seasonal in-town activities picks up as well. One fall phenomenon is various biker runs down the Keys to the island. The most prominent, Phil Peterson’s Florida Keys Poker Run, has been running for over 45 years and draws more than 10,000 riders from all over the U.S. The Poker Run has become South Florida’s biggest motorcycle party weekend of the year. Riders roll from Miami to Key West, enjoying the sunshine, ocean breezes, and riding on the many bridges that cross over the beautiful turquoise water.

The 3-day rally usually happens in mid-October and if you like bikes it is certainly worth seeing these riders hit town for the benefit of charity and a lot of fun. Each year, the city sets aside 8 blocks around Duval Street for bike parking, and there are all kinds of festivities and special activities for the motorcycle-inclined. If you ride, there is no better time to head to Key West and combine a fun party with some good fall fishing.

The rumble of the big bikes (and big people!) brings to mind the fish that could be considered the biker of the deeps – the Grouper. Big, burly, incredibly strong, and not afraid to fight, once these bad boys reach their growth they rule the wrecks, reefs, and ledges.

Nothing that comes within range of a Grouper’s huge maw is safe, sometimes including, in the case of the monster Goliath Grouper, human divers. That big mouth will snap open to suck in large baitfish, squid, octopus, Moray Eels, and even spiny lobster without blinking. Grouper will eat live, dead, or chunk bait nearly anytime you find them, and are also great table fish, making them a top favorite among the Key West gamefish.

Grouper can be caught year-round off Key West, but there are regulated seasons on this fish depending on the particular species and the waters you are fishing. For Florida Atlantic Grouper, and all Monroe County State Waters (which include the waters around Key West), it is catch and release only for all Grouper species from January 1st until April 30th, and open season from May 1st through December 31st. Although it is always pretty good for Grouper around here, for Key West fishermen, Grouper prime time comes from November through April.

Early fall is a nice time of year in Key West. The weather is cooling a bit and there are many special events in town during what is generally considered the slow tourist season.

This is a transitional period on the fishing calendar, with a lot of possibilities depending on weather conditions. For nearly guaranteed action and thrilling fights, we have plenty of Sharks on hand and the Grouper is one of the stars of the Key West fall fishing season. While not as dramatic looking as a Sailfish or Mahi-Mahi, it is a sportfish that will give you the fight of a lifetime and some delicious dinner table fare afterwards.

Come down this fall to explore off-season Key West and get in some exciting Key West fall fishing. Fish Key West has all the information you need to put together a great trip, and booking is always fast and easy.