Fishing for Tripletail in Key West 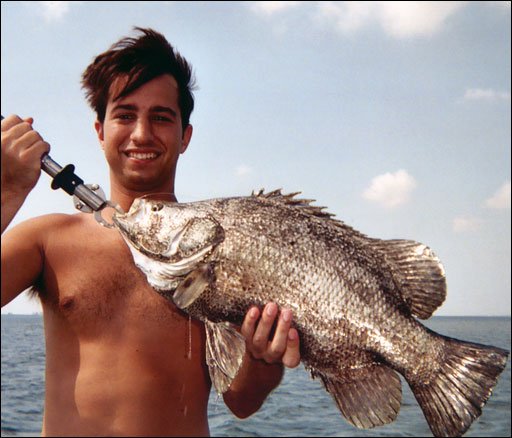 Tripletails are not well-known Key West game fish, but they are hard fighters, excellent table fish and fun to catch.

Tripletail (Lobotes surinamensis) Introduction
(Florida Record 40lbs. 13oz.) The Tripletail is also known to fishermen by names like flasher or steamboat. It has a compressed, deep body with a triangular-shaped head, a large mouth, and relatively small eyes. The profile of the head becomes more concave as the fish ages. Distinctively large and rounded dorsal, caudal, and anal fins give the Tripletail its common name. Adult Tripletails exhibit various mottled color patterns, ranging from dark brown to a reddish-brown or brown with a tint of gray, while juveniles are mottled with yellow, brown and black. Tripletails can be large, up to 35 inches in length and 41 pounds in weight, but the average weight is between 2.2 and 15.4 pounds.

Tripletail Habitat and Behavior
Atlantic Tripletails are semi-migratory pelagic fish found along the coastlines of most tropical and subtropical seas. In the western Atlantic, Tripletails range from Massachusetts and Bermuda through the Gulf of Mexico, the Caribbean Sea and as far south as Argentina. Tripletails are usually found in Florida during spring, summer and fall. They are normally solitary fish but will form schools under some conditions. In the summer, Tripletails can be found in bays, sounds and estuaries. They prefer structure, and are often found around shipwrecks, beacon towers, pilings, and sea buoys. Large adults are sometimes found near the surface over deep, open water, and always associated with floating objects. Juveniles float on their sides, imitating a floating mangrove leaf, and are usually found near floating debris or patches of Sargassum algae. Tripletails are not very abundant in any particular location.

The Tripletail is an opportunistic feeder that takes a variety of prey including small baitfish such as gulf menhaden, Atlantic bumper, and anchovies. It also eats invertebrates including blue crabs, brown shrimp, and many other crustaceans. Offshore, they will frequent any type of floating debris that has been in the water long enough to attract baitfish.

Tripletails spawn mainly in the summer along the Atlantic and Gulf coasts, with peaks during the months of July and August. Tripletail larvae go through four levels of development, and the fish grow fastest during their first year of life, probably as a response to heavy predation by other pelagic species.

Fishing for Tripletail
Tripletails strongly prefer sheltering and feeding around floating objects. In Florida waters, anglers usually find them suspended under buoys, channel markers and other floating objects. They spend much of their time in brackish water bays and estuaries, and can often be found around inlets and passes near river mouths as well as in open water.

Tripletails are not well-known to Key West visitors as game fish, but they can provide some great angling opportunities. Hard fighters and excellent table fish, Tripletails are easy to find by searching near channel marker buoys and any material that has been floating long enough to attract weed growth and small baitfish and crabs. Discarded buckets and barrels are also classic hangouts for this fish. An accurate cast with a live shrimp will more often than not draw a strike, and the outsize strength generated by the Tripletail’s deep, muscular body as it fights to regain its shelter guarantees good sport whenever one is hooked on light tackle.