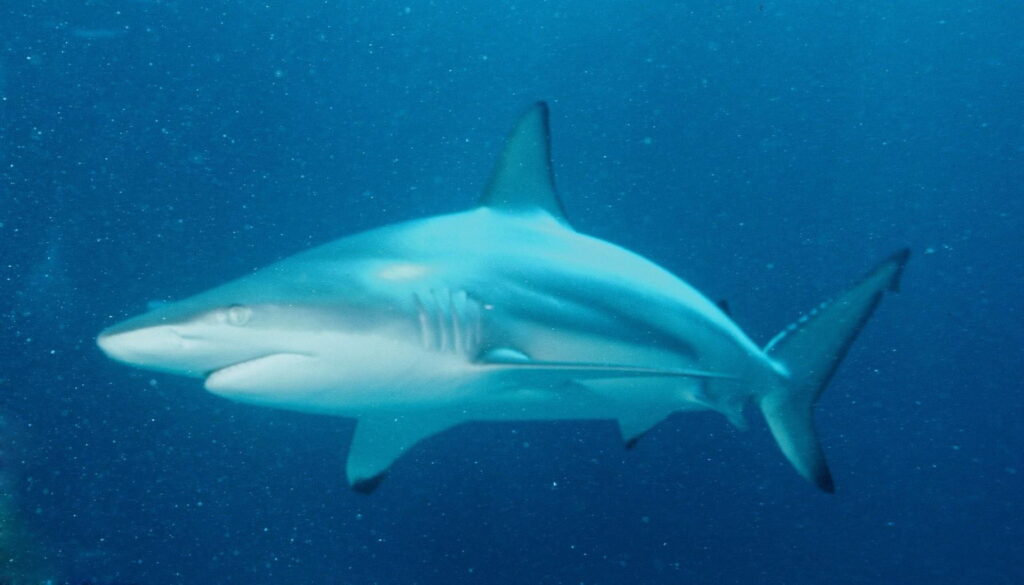 The Blacktip Shark is possibly the most abundant large shark inhabiting the Gulf of Mexico coastline, and is very common throughout the Keys. Fast, energetic, and known for making spinning leaps while feeding, the Blacktip will also jump when hooked to deliver a serious sportfishing challenge. (Florida Record: 152lbs

Blacktip Shark (Carcharhinus limbatus)
As a requiem shark, the Blacktip Shark is a member of the order Carcharhiniformes, the largest order of sharks. Well-known relatives of the Blacktip include the Tiger Shark, Bull Shark, Blue Shark, and Oceanic Whitetip Shark. Requiem Sharks in general have the classic streamlined torpedo-like bodies and excellent hunting skills we associate with the ocean’s top predators. The Blacktip Shark has a stout body, a pointed snout that may look almost v-shaped when viewed from below, relatively small eyes, and 5 pairs of long gill slits.

The Blacktip’s coloration is dark gray/blue to brown on the back and sides, with a white belly and a distinct white band across the flank. The dorsal fin of the Blacktip is tall, with a short free tip near the base at the rear. The pectoral fins are long and pointed. On most individuals, the tips and edges of the fins are black, but this coloration can fade with age. These sharks usually grow to around 5 feet long, although the longest known specimen was 9 feet long. The maximum recorded weight for a Blacktip was 271 pounds, and the known lifespan is 12 years.

The Blacktip is one of the most commonly-harvested commercial Shark species. The flesh is tasty and the hide, fins, and liver are all valuable. Commercial and recreational landings in the western Atlantic and Gulf of Mexico are regulated, and recreational fishermen in the region landed 74,000lbs. of Blacktip Shark in 2019.

Blacktip Shark Habitat and Behavior
Like other requiem Sharks, Blacktips prefer warmer waters and are common along tropical coastlines around the world. Usually found at depths of less than 100 feet, they range in nearshore waters around river mouths, bays, mangrove swamps, and in other estuaries. Blacktips can tolerate brackish and fresh water, but do not penetrate far into fresh water. DNA analysis reveals western Atlantic Blacktips to be a distinct lineage from Blacktips in the eastern Atlantic and Indo-Pacific regions.

In the western Atlantic, Blacktip Sharks occur from Massachusetts to Brazil and throughout the Caribbean Sea and Gulf of Mexico. During their seasonal migration in the western Atlantic, Blacktips range from Nova Scotia to Brazil, but they are most abundant in the Gulf of Mexico and Caribbean. Some of the known Blacktip nursery grounds are located along the Gulf Coast of Florida at Pine Island Sound, Terra Ceia Bay, and Yankeetown.

Blacktip Sharks reach sexual maturity at 4–5 years for males and 7–8 years for females, and at about 4.5 to 5 feet in length. Blacktip Sharks migrate over long distances, but will return to their original nursery areas to give birth. Female Blacktips bear 1-10 live young every other year, and they are capable of asexual reproduction in the absence of males. Young Blacktip Sharks spend the first months of their lives in shallow nursery waters near barrier islands, salt marshes, and estuaries then migrate to wintering grounds in the first fall of their lives.

Blacktips are usually found in groups, and juvenile Sharks have been seen to form aggregations during the day, possibly as a defense against predators, then disperse at night. Blacktip Sharks are said to have a timid demeanor as compared to other large requiem sharks. They become excited and aggressive in the presence of food, and this is thought to contribute to their occasional attacks on humans, which usually result in only minor injuries.

Blacktip Sharks feed on a wide variety of small schooling fish like anchovies, herring, menhaden, mullet, and sardines, but they also eat many other types of fish as well as other small sharks, dogfish, skates, and stingrays, and sometimes crustaceans and squids. In the Gulf of Mexico, their most important prey fish are the Gulf menhaden and the Atlantic croaker. Peak hunting times are at dawn and dusk. The Blacktip’s spinning leaps out of the water when feeding are thought to occur when a Shark spins while passing vertically at high speed through schools of fish near the surface. Their momentum then causes them to break into the air when they reach the surface.

Fishing for Blacktip Sharks
Blacktip Sharks are numerous in Key West waters, and are a lot of fun to catch because they are strong, steady fighters and sometimes make exciting leaps out of the water when hooked. Live and chunk bait work well, and Blacktips can be caught on flies and lures too. As social Sharks that often move in large groups, Blacktips are prone to going into a feeding frenzy when a large quantity of food is suddenly available, so chumming is very effective with these Sharks.

Blacktips can be found over the reefs, on wrecks, and in the shallows. Fishing on the mud flats where mullets feed can be productive, and Blacktips also like the deeper channels where baitfish schools are found. Blacktips can be caught at the surface over wrecks when they are schooling to hunt baitfish. They will often appear to investigate a chum trail or the disturbance caused by hooked fish. Although Blacktip Sharks provide good meat, as with almost all Key West Shark fishing, hunting down a Blacktip will usually be a catch-and-release experience. But expect a long hard fight before you get a Blacktip Shark alongside the boat for a photo opportunity.