Fishing for Sailfish in Key West 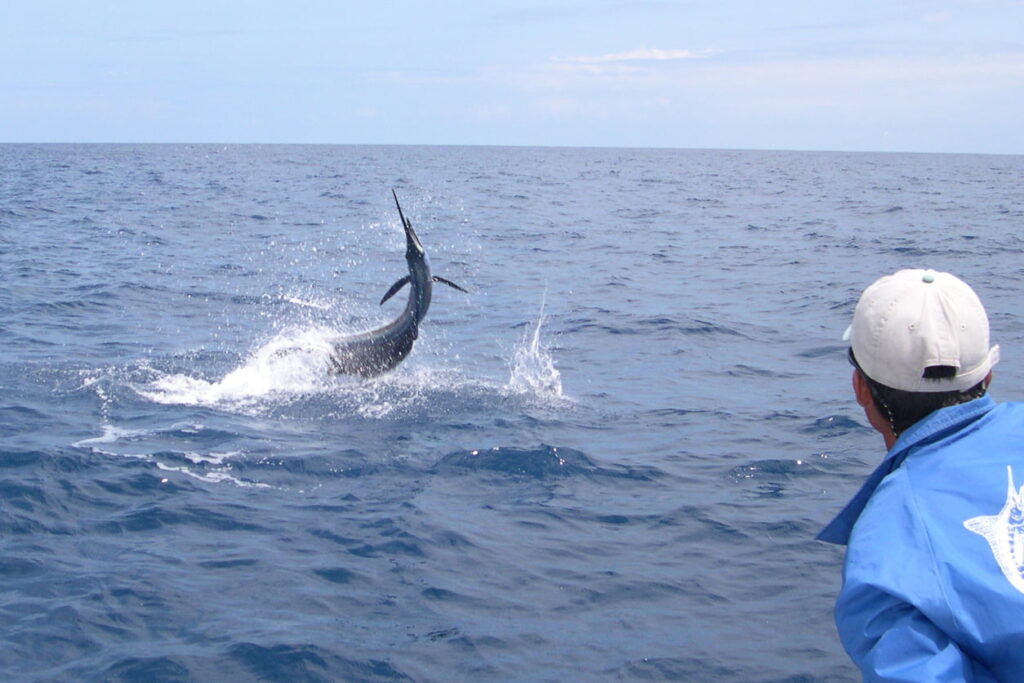 Florida’s official State Saltwater Fish, the Sailfish is a star on the Key West sportfishing stage. Tournament pros and enthusiastic amateurs alike travel to the Keys by the thousands every year to experience the slamming hits, high-speed runs, and acrobatic fights this dramatic-looking gamefish can dish out. In the peak months of their migration, Sailfish packs hunt along the Gulf stream, offering the chance for multiple hookups in a single trip. (Florida Record: 126lbs)

Sailfish (Istiophorus platypterus)
In the past, two species of Sailfish were recognized: the Atlantic (Istiophorus albicans) and the Indo-Pacific (Istiophorus platypterus) Sailfish. Modern DNA analysis techniques show that there is no difference between Sailfish found around the world, and experts are gradually coming to recognize all Sailfish as belonging to a single species (I. platypterus). Like other members of the billfish family, Sailfish have a long, pointed, spear-like upper jaw extension, the classic characteristic they share with Marlin, Swordfish, and Spearfish.

Unlike other billfish, the Sailfish has a sail-like dorsal fin that runs for over half the length of its body and may be taller than the fish is long. It is the fish’s namesake feature; normally kept folded when swimming, the sail is erected when the Sailfish is hunting or excited. The sail may also be raised to make the Sailfish appear larger when it is threatened by predators such as open ocean Sharks, Orcas, and Mahi Mahi.

Although Sailfish over 10 feet long have been recorded, maximum size for Sailfish from the Atlantic Ocean is 124 inches in length and around 128 pounds in weight. Fish from southern Florida waters tend to be smaller, running between 68-90 inches in total length, with the largest fish usually being female. Sailfish are one of the fastest animals in the water and have been clocked at speeds of up to 22 miles per hour when in pursuit of prey.

Sailfish are capable of changing color, and their body markings vary depending on levels of excitement. Color changes are controlled by the fish’s nervous system and can occur almost instantly. Normal coloration is dark blue on the back, turning to white with brown spots below. About 20 bars, each composed of many light blue dots, are present on the sides of the fish, and the fins including the large, deeply-forked tail, are all generally blackish blue. The Sailfish will turn its body light blue with yellowish stripes when excited. Some studies suggest that color changes may be used to confuse prey, communicate with other Sailfish, or show emotion.

Sailfish Habitat and Behavior
Sailfish are widely-distributed and occur around the world between latitudes of approximately 50°N and 32°S, with some east-west variation. The key distribution factor appears to be water temperature, as Sailfish generally swim in the warmer surface waters above the thermocline, seeking water between 70° and 83°F. Sailfish appear more frequently in nearshore water than other oceanic billfish.

At the northern and southern extremes of their range, Sailfish appear during warm seasons, a phenomenon that may be linked to prey movements affected by water temperatures. In the western Atlantic, the greatest abundance of Sailfish occurs off the Atlantic coast of Florida, in the Caribbean Sea, and in the Gulf of Mexico. Distribution in this region seems to be influenced by wind conditions as well as water temperature. Sailfish can be found in waters around Key West at any time of year, but peak abundance coincides with the November to January and April to early May fall and spring migrations.

Sailfish spawn in both shallow and deep water, with the primary spawning season occurring during the summer months in the western North Atlantic Ocean. In the shallow water off southeast Florida, spawning occurs near the surface, where females can be observed swimming slowly along accompanied by one or more males. The female extends its dorsal fin above the water as a display to attract males. Pairs form, and reproduction is carried out via external fertilization with eggs and sperm released into the water column.

A large female may release 4,500,000 eggs that hatch into larval Sailfish approximately 0.125 inches long. The larvae lack the beak characteristic of adults, but by the time they are 8 inches long, the juveniles have all the features of adult fish. Sailfish grow quickly, reaching lengths between 3ft 11 inches to 4ft 11 inches in a single year. A 6-month-old juvenile may weigh 60lbs and be 4.5 feet long, with growth rate decreasing at this size. Yearling fish are often observed off the coast of Florida.

Sailfish eat a variety of prey as they grow, beginning with tiny zooplankton and moving on to fairly large bony fish, squid, and crustaceans. They often hunt pelagic forage fish like half-beaks, jacks, mackerels, needlefish, and tunas. Packs of Sailfish work together to feed on schooling fish including sardines and anchovies. The variety of prey taken indicates that Sailfish hunt at the surface, as well as in midwater, along reef edges, and along the bottom.

A hunting Sailfish raises its sail, helping to reduce side-to-side movement of the head, increasing stealth as the Sailfish approaches a school of baitfish, and adding to the effectiveness of the bill as a weapon for striking prey. When hunting in groups, Sailfish have been observed to use their raised sails to help drive a school of baitfish or squid together. The sail may also act as a signal to the other Sailfish in the hunting group.

Fishing for Sailfish
Sailfish are an offshore species usually associated with waters near the Gulf Stream current and the 600-foot depth line, so typical fishing strategies include running out to the correct depth zone, then looking for color changes and back eddies along the Gulf Stream. Back eddies produce strong currents that trap schools of baitfish between them, and Sailfish use the color difference between the clear Gulf Stream waters and the dirtier bay waters as camouflage for ambush attacks.

The Sailfish rush the bait and push it into a ball, then slash through the packed baitfish, striking side-to-side with their bills and snatching fish stunned by impact and wounded by the small, tooth-like scales on the bill. Sailfish also hunt the reef edges in the wintertime when ballyhoo school over the reef. The hunting Sailfish “shower” the baitfish by driving them into water only a couple of feet deep, where the smaller fish leap by the hundreds in a confused frenzy as they try to escape the attacking Sailfish.

When hunting Sailfish are located, drifting through them with live baits on unweighted lines or trolling baits and lures through the area are all good strategies. Ballyhoo, blue runners, pinfish, mullet, scads, and squid will all attract cruising sailfish. Sight-casting directly to Sailfish spotted on the surface is some of the most thrilling fishing there is. A hookup results in an exciting fight as the Sailfish uses its speed and acrobatic ability in attempts to throw the hook.

Sailfish are one of the legendary trophy species of the Key West sportfishing arena. Fishermen from all over the world come to Florida waters in pursuit of Sailfish, and several famous Sailfish tournaments take place in the Florida Keys each year. Sailfish are fished commercially in many parts of the world and eaten fresh, smoked, broiled, baked, and as sushi or sashimi. On Key West fishing charters that target Sailfish, catch and release is a nearly universal practice aimed at preserving this great Key West fishery. After pictures are taken, tired Sailfish should be carefully revived during a gentle release to enhance the odds of their survival.