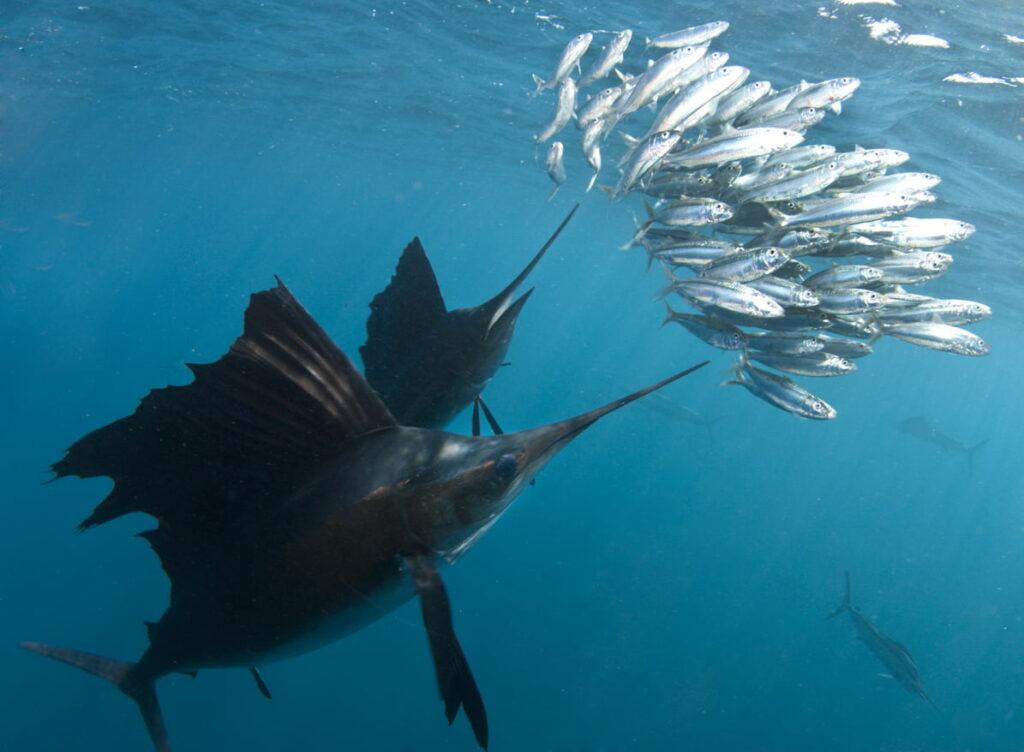 Happy holidays from Fish Key West, and good luck on the water in the New Year. We are in the middle of the two busiest weeks of the year here in Key West as island hotels and fishing charters alike sell out to visitors looking for 72 degrees and sunny instead of the classic white Christmas. December Key West fishing has been great and all signs point to exceptional Keys sportfishing in the New Year.

With live bait plentiful and easy to catch, the offshore fishing has been going strong all month. Ballyhoo are running thick on the reef, and boats working the reef edge and beyond out to the Gulf Stream have been doing great on Black Fin Tuna, Kingfish, Mahi-Mahi, Wahoo, and Sailfish.

With lower water temperatures pushing the bait in shallow, it has not been uncommon to get some Mahi and Kingfish right up shallow on the reef. Drifting live bait just off the reef edge in about 130 feet of water has been productive for Kingfish running anywhere from 25 to 40 lbs. The Sailfish have been working the Ballyhoo along the reef edge as well, and sight casting live bait to Sails feeding at the surface has been the ticket for some explosive top water action. Boats have been pulling into Charter Boat Row flying 3-4 Sailfish flags and hanging up nice catches of Mahi-Mahi and Blackfin Tuna to boot.

Inshore, the patch reefs are swarming with feeding Grouper, Snapper, and Cero Mackerel. Fishermen have been showing off limits of 8-12 pound Mutton Snapper in dockside photo sessions, with occasional fish pushing over 15 lbs.

For pure fighting pleasure inshore and out in the Backcountry, Key West guides have been putting their anglers on the schools of Jacks that are working the channels and basins. Jack Crevalle, Horse Eye Jack, and Yellow Jack are all plentiful right now, and though most people do not find Jacks tasty, there is no question about their ability to blast live bait or plugs off the surface and seriously bend a rod.

Likewise with the Barracuda, as big Cudas have been everywhere from the shallow Flats to the close-in wrecks and out lurking along the reef line. Traditional fluorescent surgical tube lures as well as most any kind of shiny spoon or hard plastic lure work well on the Barracuda this time of year. As with the Jacks, it is all about the fight rather than the food with these toothy critters.

With the variety of good fishing available this time of year, people tend to overlook Tarpon fishing. While the months of the enormous schools of migrating fish are still to come, resident and juvenile Tarpon can be spotted around Key West at the right places and times. They linger at spots along the edges of the mangrove islands and Flats, and move through the Backcountry channels in between.

If you find fish rolling and make an effective presentation with the particular type of bait they are eating, it is possible to catch Tarpon in midwinter. Live Pinfish drifted along the bottom will get strikes from fish weighing anywhere from 5-35lbs. Having a variety of baitfish on hand that lets you match natural food sources is the best way to ensure success with these out-of-season Tarpon.

Sharks on the Hunt

Shark fishing is another type of specialty angling that has been attracting a lot of attention lately. Warm water temperatures, plentiful bait, and good fishing conditions in general seem to make the local Sharks more ravenous than ever.

The Lemon Shark is one of the most common species around Key West. A resident of shallow, sub-tropical waters around the world, this powerful fighter normally feeds alone during the evening and night, but may sometimes be found in groups of 4-6 individuals.

A hunter of the coral reefs and mangrove islands, the Lemon Shark preys on reef fish like the Parrotfish, and will also take crustaceans and even smaller members of its own species. Identified by the striking yellow tints along their bodies, Lemon Sharks often reach over 200lbs in weight and 10 feet in length. They will test the fighting skill and will of any angler who tangles with them.

Along with Lemon Sharks, the Shark fishing charter captains have been reporting numerous encounters with aggressive Bull Sharks, Nurse Sharks, Hammerheads and several other species. Great Shark fishing has just been the icing on the cake throughout what has been a great fall for Key West sport fishing. Lately, it has become common for fishermen to enjoy a day of fast multispecies action, fill the boxes with Snapper and other table fish, then finish the session by battling a few Sharks to the side of the boat for pictures.

Put a December Key West Fishing Trip Under the Tree

With the fishing good and the weather warm, it’s a wonderful time of the year to treat yourself to some Key West sportfishing. With the variety of fishing available and expert Key West fishing charter captains ready to get you on the fish, it’s hard to miss. Go offshore for big game or get some fillets for the table inshore on the reefs and in the Backcountry. Match your strength against big Sharks for extreme photo ops that will blow the folks back home away.

If fishing like this sounds good to you, just contact us here at Fish Key West and we can put you on board with one of our top local charter captains for a day of fishing that you will never forget.