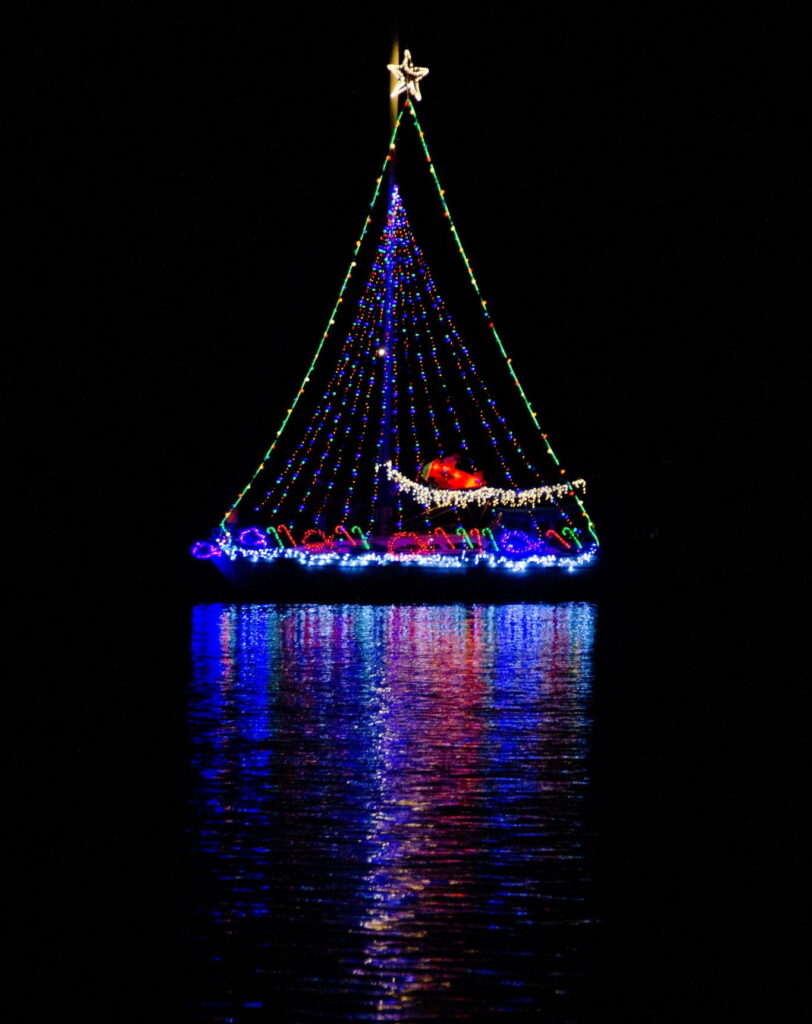 In December, the focus around Key West is always on the holiday season. It heralds a big winter tourist rush along the Keys and many festivities around the island city.

The Schooner Wharf Bar lighted boat parade is a Key West Christmas staple. This spectacular annual December highlight is enjoyed by large crowds of visitors and Key West locals alike. For over 20 years this family-friendly event has featured vessels of all types, decorated and lighted in their holiday finest, motoring in line around the historic Key West seaport and harbor area.

Thousands of spectators gather to watch the parade from shore after catching a performance of holiday music by a rotating cast of local favorite groups. Of course many of the Key West charter fishing captains also deck out their boats in holiday style and join in the festivities. Captains and crews enjoy a leisurely motor around the harbor, waving to the crowds and tossing candy and beads to the children on the dock.

There is actually some serious competition afoot in the boat parade. Crews spend a lot of creative energy putting together inventive themes and stringing thousands of lights and other seasonal decorations from bow to stern and masthead to keel of crafts ranging from ocean-going yachts to kayaks. Along with bragging rights, the sailors are going after more than $20,000 in prize money.

December and the beginning of the winter fishing season typically brings a mix of cool fronts alternating with mild weather and calm seas. As the weather settles into winter, we hope for a reduction in the heavy winds of late fall. While the wind is good for Sailfishing, it makes for uncomfortable charter trips.

With slacking winds between cold fronts, the Kingfish, Tuna, and Wahoo start biting offshore and the bottom fishing along the reefs and over the wrecks gets a lot easier. Various Grouper species, along with Barracuda, Cobia, Permit, Mutton Snapper, and Yellowtail Snapper are all plentiful in December.

On days of mild winds, the Flats are accessible to fly fisherman, and there are always some good catches of Barracuda and Sea Trout brought into the dock this month. The shallow water Shark fishing is also hot and holiday visitors have a lot of fun bringing the fearsome beasts alongside the boat for pictures before releasing them unharmed.

There are often quite a few Mahi-Mahi still being caught in December. These are generally summer fish, but when we get a lot of bait on the offshore reefs early in the month and no strong cold fronts passing through, the Dolphin fishing can stay good through at least the first part of the month. As the ballyhoo and other bait fish swarm to the reefs in search of warmer water, the Key West deep sea charter fishing captains begin reporting many gamefish being taken along the edge of the reef.

In fact, the December fishing is excellent off both the Atlantic and Gulf sides of Key West. The Atlantic offshore charter boats get into Blackfin Tuna, Sailfish, and Wahoo on live bait, with pilchards and thread-fin herring working well in about 120 to 220 feet of water. The bottom fishing is also good for some big Mutton Snapper. The wrecks produce limits of nice-sized Yellowtail Snapper and bigger game like Amberjacks and Lemon Sharks. Out in the Gulf of Mexico anywhere from 8 to 20 miles, Kingfish from 20-40 pounds are caught regularly on live blue runners and herring. Kingfish and Blackfin Tuna should both continue biting well through the month.

Have Yourself a Merry Key West Christmas

December is a cheerful, busy time of year to be in Key West. It’s the first of the two peak cruise ship months in town, with two ships in port almost every day of the month. Things are going to be hopping on the island, and there is a general feeling of high spirits, probably relief at being far away from the miserable winter weather of the north.

Book early and it is no problem to come on down to Key West for the holidays and enjoy great fishing along with the many special events of the season. If you are looking for a day of fishing on your cruise ship port call, plan ahead because the Key West charter fishing boats are busy, especially in the last weeks of the month. Rely on Fish Key West to help you get your fishing trip organized then relax and look forward to a wonderful day on the water.