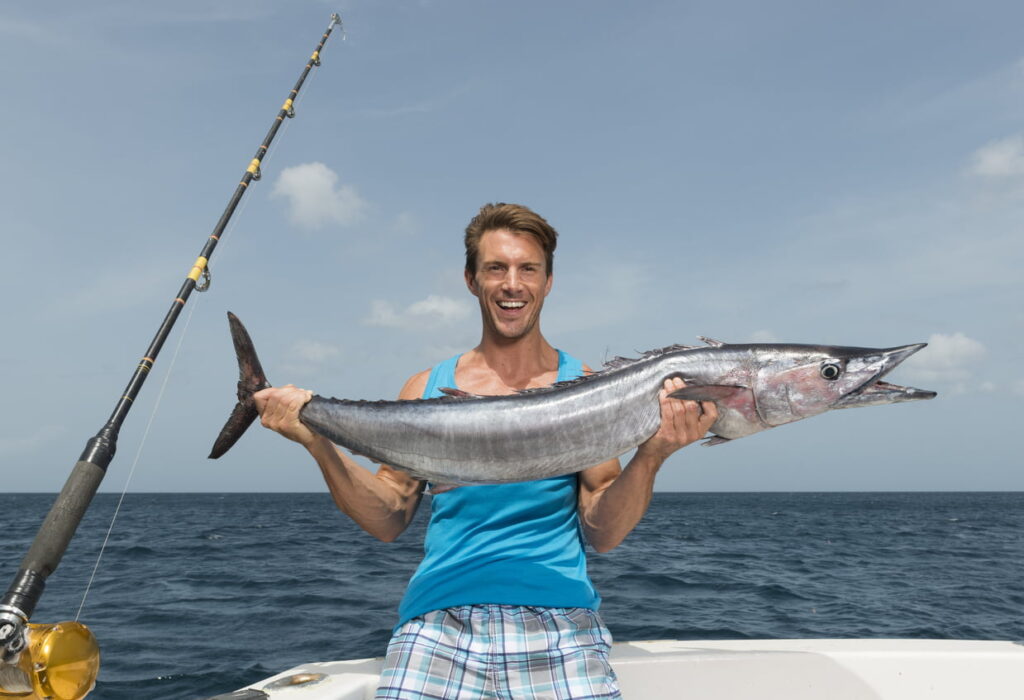 Just like in the upper 47, November is autumn in the Florida Keys. The weather cools off as cold fronts begin rolling through like clockwork. When these waves of cold air drop down across the Keys, some dramatic weather gyrations take place. Although fishermen from northern climes are likely to laugh at dropping temperatures that hold in the mid-60s, this is cold for Key West fishing.

Mild westerly winds precede these fronts, then clock to the north-northeast at 15-20 mph, with gusts up to 30 or more. On days like this, many boats don’t leave the dock, much less head out past the reef. But a little sporty weather does not cool the Key West November fishing for long.

In the couple of days immediately before and after a front hits, the constant changes in wind direction set up a confused mess of mixed-direction swell and chop that captains refer to as a sloppy sea. For most people, these are not good conditions to be miles out looking for fish. But once the front blows through, over the next few days the barometric pressure climbs back up, the wind gradually lays down, and the temperature heads back into the 70’s.

When the wind comes back to east-southeast off the Florida Straits and the Caribbean, the offshore bite can turn on in a big way. These gaps between cold snaps offer some great multi-species sportfishing action for those ready to handle a bit of sporty water. You get hits coming early and often on the offshore trips, and having multiple fish on at the same time is a common theme.

Mahi-mahi, Sailfish, lots of Wahoo, and tons of Blackfin Tuna get caught and released in November, and many nice dinner catches are brought into Charterboat Row. Some lucky anglers even score the Key West triple double – two Sailfish, two Mahi-Mahi, and two of any other pelagic species.

Speaking of multiple hookups, the Blackfin bite can be real good on late fall afternoons. Trolling lures or bait works, and with the fish gorging on all the ballyhoo and other baitfish that move in with the cooler weather, the strikes are repetitive and nearly constant once a school has been located. Blackfin are strong, fast fish that give a great fight on light tackle; they are also excellent on the table grilled, broiled, seared, or as sashimi.

With some Skipjack Tuna and a few Mahi-mahi mixed in to the fun, a daily autumn sight is tired but happy fishermen laying some nice catches out on the dock for the afternoon photos after a day of Key West light tackle fishing.

Run to the Reef for Great Key West November fishing

Up shallower on the reef, November brings massive schools of baitfish and the feeding frenzy gets going strong. Predators like Kingfish, Tuna, and Cero Mackerel slash though the bait schools, forcing the small fish to run for the surface and leap from the water in showers. Birds wheel and dive for their piece of the action while chopped and wounded baitfish create a natural chum slick, bringing the Yellowtail and Mutton Snapper, aggressive Grouper, Sharks, and other species in for the feast.

Anglers willing to work the reef on a bit of a swell can slaughter big Yellowtail and Muttons, and do very well on Cero and Grouper. The reef fishing is especially good in the evenings after an afternoon rain shower brings air and water temperatures into the perfect range to ignite the bite.

The Black Grouper bite can get good this month. As long as water temps over the reef stay in the mid to high 70s for the most part, this seems to keep the Black Grouper around and feeding in good numbers. The Black is one of the most common of the Grouper species caught around Key West, and its normal high season is from May to August. But warmer days in November often see anglers rewarded with catches of this hard fighting favorite among the table fish species.

It is pretty common to get Blacks in the 20- to 30-pound range, and visiting anglers are often surprised by the Black Grouper’s hard hit and immediate run for its hole. On medium weight tackle, it is a tough fight that is often lost, but never forgotten by the lucky fisherman.

Key West Light Tackle Fishing: Something to Be Thankful For

November is a great month to go light tackle fishing in Key West, and everyone is always more than thankful for the extreme fishing action that comes in between what are usually relatively brief weather lay-ups. With the Key West winter fishing season coming up, there are plenty of good reasons to get down here for your dream Key West light tackle fishing trip.

Don’t worry about the weather – The Backcountry is outstanding as a retreat from the wind, and the Shark fishing is generally solid out there in November so you can get into some brutal fights and cool photo ops if you want. It’s also not uncommon for everything else to be biting in the Backcountry. Daily catches range from Cobia, Mackerel, and Redfish to Sea Trout, Pompano, Snook, and some nice messes of Mangrove Snapper for the freezer.

The Backcountry fishing will only get better as the winter goes on, and if you have ever wanted to run out to the Marquesas Keys and experience the amazing fishing there, now is the time to do it. Drop the snow shovel, grab a fishing rod, and come aboard with Fish Key West for some legendary Key West light tackle fishing.