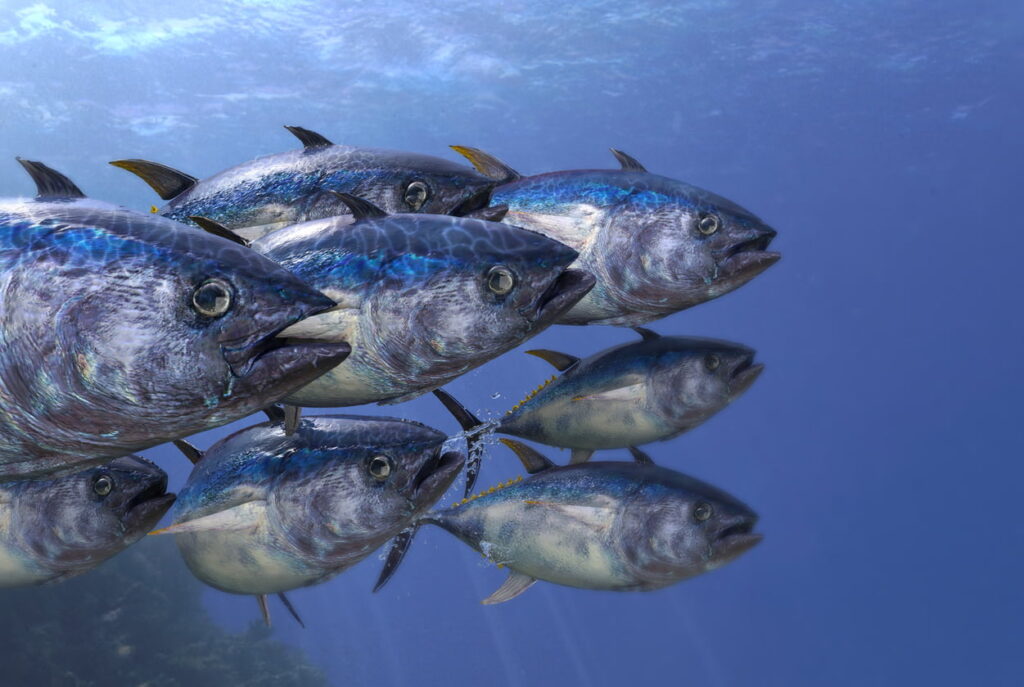 Celebrate spring with some April Key West fishing! It’s an excellent time to get into some exciting light-tackle fishing action as the final cold fronts blow through, the water warms, and the bait fish start moving for their seasonal migration. The transition between winter and summer conditions gets the gamefish moving and feeding, the excitement of the Tarpon migration is on, and offshore fishing gets good with the start of prime Mahi-Mahi season.

April is just an all-around nice time of year to fish Key West because the winter crowds are mostly gone, spring break is over, and daily temperatures are in the perfect high 70s, low 80s range. Why not shake off the long winter by heading south for some Key West sportfishing?

April is one of the busiest months of the year for Key West charter fishing, and everyone has one fish on their mind – Tarpon. Depending on the weather, the season can get started in March but since Tarpon have very specific water temperature preferences (72 to 82F) April is when the migration usually gets into full swing. If you have the patience and skill it takes to stalk, hook, and fight a fish that commonly runs over 100lbs, you will want to take a shot at Key West Tarpon fishing.

The harbor and the Backcountry channels and basins are the place to be this time of year when the water temps are still on the cool side. In the late evening, chumming in the harbor can produce steady action. On calm weather days it’s an excellent time to get out and enjoy the scenery and the sunset along with the chance to fight huge fish.

For those who want to work a bit harder, hunting down rolling Tarpon in the channels and along the edges of the Flats and casting flies at them is a great way to get into an unforgettable fight. At this time of year, a good local guide can find you fish that are ready and willing to eat most things thrown their way, so if your version of Key West light tackle fishing involves a five-foot long fish on the end of a skinny fly rod, now is the time to go for it.

The Permit Spawn Goes Off

The Permit spawn is another April special that is not to be missed. These fish are famous for being hard to get close to and catch out on the Flats, but during the spawn when they gather over their favorite reefs and wrecks, it can be a different story.

Permit will congregate in big schools inshore then move through gaps in the reef to spawn in deep water. When you find one of their spawning locations, it is typical to sight packs of 500 or more fish in one spot. They are often found milling around at the surface with fins out of the water similar to what is seen when fishing Permit on the Flats. But during the spawn, instead of trying to creep up on one or two smart, spooky fish feeding in clear water, all you need to do is throw a live crab or maybe a buck tail jig into the pack and wait for the hit.

The Permit is a very strong fish and will give a good fight with some long runs thrown in. By the time you get one worn down and up to the boat for pictures and release, you may be feeling a bit worn out yourself.

Out on the reef, it is easy to fill a limit of Yellowtail Snapper, and the Grouper also bite well even though you still have to throw them back until the end of the month. But the big spring reef fishing event is the Mutton Snapper spawn. Locals are anticipating the first round of Moonlight Madness on the April full moon, and the Mutton Spawn will go on around the full moon from now until June.

Fishermen in the know will be packing town to head out into the amazing Key West sunset for an evening of fast Key West light tackle fishing action. Muttons are one of the most exciting fish on the reef because of their willingness to bite, beautiful colors and delicious taste. Not to mention the fact that they can run up to 30lbs and are tough, tenacious fighters. Reserve your seats for this event early because it books up every year.

April, May and June are the peak season for Mahi-Mahi, or Dolphin fish. With the weather settling down from the breezy conditions common to March, April is a good time to get out and experience the type of action that has made Key West light tackle fishing world famous. Mahi are colorful, exciting fish to catch with their high-speed runs and frequent jumps. They are also highly-prized as an eating fish.

Another popular spring Key West deep sea fishing trip is the Tuna hunt. Blackfin Tuna are fast, torpedo-shaped fish that gather in big schools over the humps and wrecks on the Atlantic side. When the Blackfin are feeding on the surface, tossing any shiny lure into the school results in almost non-stop fun. For a real offshore adventure, get on a trip that runs a few hours out into the Gulf of Mexico to rendezvous with the shrimp boats. The Blackfin follow those boats and wait for the by-catch and shrimp scraps to be dumped overboard. The feeding frenzy that follows will have you fighting Tuna until your arms are limp.

There are plenty of other offshore big game fish on the prowl now as well. You can try anchoring in the Gulf to lure Kingfish with live bait. There are a lot worse ways to spend an afternoon than listening to your drag scream while a hooked King busts out of the water trying to shake free. Wahoo and Sailfish also come into the dock nearly every day this month, and late April sometimes brings a big push of Sailfish out in the Atlantic waters along the Gulf Stream.

Don’t Be a Fool – Get in Some April Key West Fishing!

Welcome in spring after a cold winter by coming down to Key West and joining the fun. You can’t beat April Key West fishing for sheer variety. You can go for some of the famous Key West light tackle fishing, head out deep sea fishing for Mahi-Mahi, Sailfish, Wahoo, Tuna and Shark, hunt the wrecks for Permit, or try your skills at some legendary Key West Tarpon fishing.

April brings on some world-class fishing in Key West, so book a trip with Fish Key West and get hooked on great spring fishing.