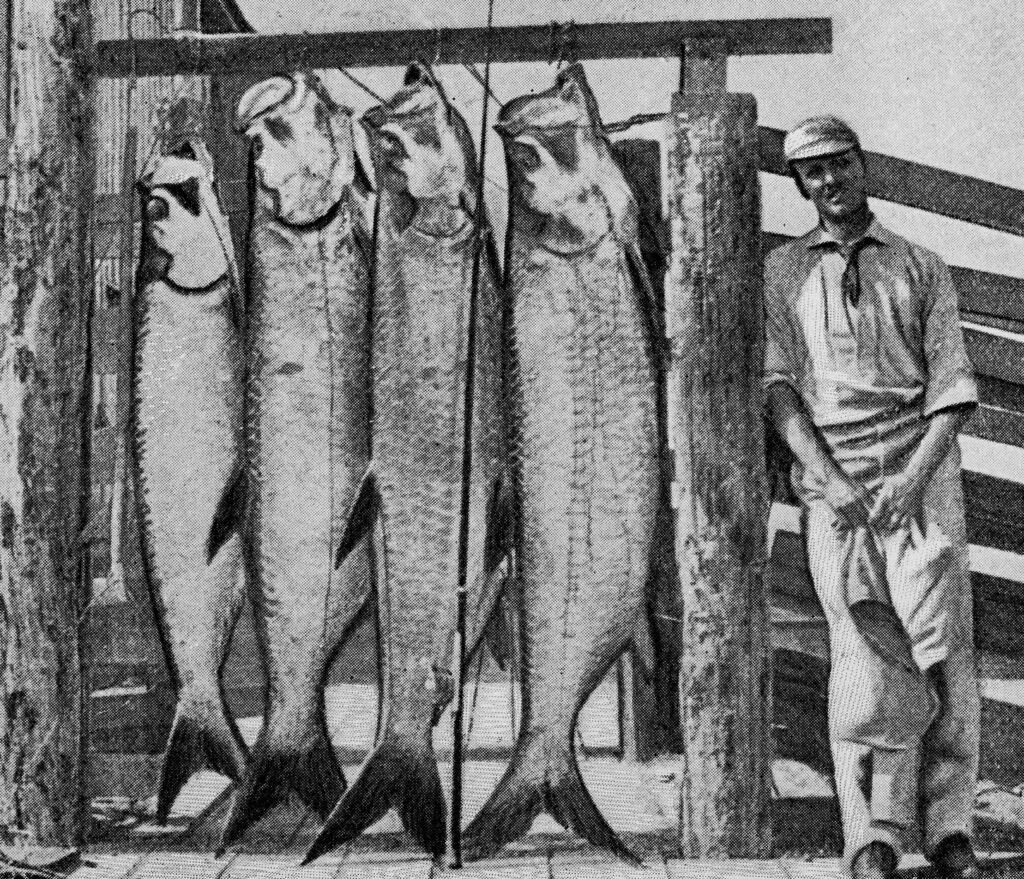 As warm spring weather takes hold in the Keys, attention begins to shift towards the event that many consider to be the high point on the Key West fishing calendar – The Tarpon migration. Besides being huge and very impressive-looking, the Tarpon belongs to a genus of fish with a fossil record going back to the Cretaceous period 113 million years ago.

These fish are actually prehistoric beasts, with the potential to grow 8 feet long and weigh in at over 350 pounds. Even the “small” 100 plus-pounders encountered around Key West will give you a taste of Jurassic Fishing once you are attached to one with fishing line. Many elements of the Tarpon’s life cycle remain a mystery to fishermen and marine biologists alike, but here we can offer a brief snapshot of one of the world’s most magnificent sportfish and one well-worth pursuing on a Key West fishing adventure.

On the Trail of the Silver King

Tarpon are not commercially valuable food fish. This is one reason for the lack of documentation regarding the geographical distribution and migration patterns of the species. Tarpon are found on both sides of the Atlantic Ocean. Their eastern Atlantic range is known to extend from Senegal to Angola, with occasional encounters as far north as Portugal, the Azores, and the south of France. In the western Atlantic, Tarpon mainly populate the warmer coastal waters of the Gulf of Mexico, Florida, and the West Indies. However, they have been caught by as far north as Nova Scotia and south to Argentina.

Tarpon can live in oxygen-poor brackish water, and they tolerate wide ranges of salinity throughout their lives. They will eat almost anything dead or alive, and their habitat and migration paths seem limited only by water temperatures. Tarpon prefer water temperatures of 72 to 82 F; below 60 F they become inactive, and temperatures below 40 F can be lethal.

Interestingly, there are reports of Tarpon breeding grounds now established in the Pacific due to the use of the Panama Canal as a migration corridor. The Canal migrations had been scientifically documented for years, but for a long while the fish were not believed to breed in the Pacific. Now, anecdotal evidence gathered over the last 60 years from Tarpon guides and anglers indicate the presence of many juvenile Tarpon as well as mature fish in various waters on the Pacific side of Panama.

Tarpon found in the Keys appear to belong to two groups, one of fish generally inhabiting Gulf of Mexico waters, the other comprised of fish that come in from the Atlantic and east coast of Florida. The important thing is that these two groups meet and mingle every spring in the waters around Key West, with hundreds of thousands of Tarpon and a nearly similar number of anglers on hand to make the magic of Tarpon season.

Are You Looking for a Fight?

Nicknamed the Silver King because of the distinctive large, silver scales that cover their sides, Tarpon also produce an unforgettable mirror-like flash when they jump high into the air on a sunny day. Tarpon jump a lot when hooked, and between its incredible strength and fighting spirit, triple-digit weight class, and very hard mouth (A Tarpon’s tongue is made of bone.) a Tarpon is very hard to keep on the line, and it is difficult for all but the most experienced to land one in less than an hour.

It’s difficult to believe that many fishermen take on the challenging Tarpon with a fly rod in the shallow-water Flats. Key West Flats fishing guides use specialized Flats Skiffs to hunt for feeding Tarpon that move up onto the Flats or patrol the edges of channels while the incoming tide is pushing bait inshore. In calm conditions, Tarpon can be seen rolling on the surface with their silver sides, black backs, or tails visible. When a school is sighted, the guide will position the boat to intercept the fish and the angler must quickly false cast out adequate line then make an accurate shot at the fast-moving fish. On fly gear, a successful hookup leads to a fight that is several hours long.

Fishing live, dead, or artificial soft baits on spinning or baitcasting rods is also an effective and popular Tarpon tactic. The easiest way to catch Tarpon is with a rod spooled with 30-80lb line baited with live crab, mullet, or pinfish. Groups of feeding fish are located rolling in channels and deep basins in the Backcountry Flats, in Key West harbor, or at various points where incoming tides rush through gaps in natural structure or around bridges. Live bait or soft artificials should be hung under a float and cast 4-5 feet in front of the feeding fish. Plugs can also be effective; they should be cast into the middle of the school or in front of the fish then retrieved away with good speed. Feeding Tarpon will strike readily, but it is difficult to get a good hook set and hold the fish through the first jumps.

In the early spring Tarpon season around Key West, we want to see calm or south winds and water temps holding in the 70s. When temperature and tide align, an experienced Key West charter captain can get anglers on big migratory fish laid up in the Atlantic and Gulf basins and on the flats off the deeper channels. As the migration intensifies, big schools move into the Key West harbor. That’s when anchoring up and chumming produces good results on baits drifted back to the feeding fish along with the chum slick.

The blue water fishing on the Atlantic side of Key West can be tough when fickle spring current and water conditions refuse to come together. Persistent anglers who want to stick it out on the Atlantic deep sea charters often need to run miles offshore to water as deep as 500-800 feet. It is all about searching for the color change where the dirtier inshore water breaks along the edge of the turquoise waters of the Gulf Stream and the ambush predators hide. With weed lines beginning to form out there and the water warming up, you can to get into some good size Mahi-Mahi. This is the time of year when we usually get some early fish moving through; they often run big, and you will see reports of 50lb bull Dolphin being boated.

If the ocean waters are too sporty, a good alternative is to head out into the Gulf of Mexico to target another migratory predator – The Kingfish. We get a solid Kingfish bite out there in the spring. There is also the possibility of fishing the Gulf wrecks for big Barracuda, Amberjack, Cobia, Snapper, and Sharks. The Gulf wrecks are also home to the giant Goliath Grouper, which are getting to be so plentiful that they are almost a nuisance with their voracious appetite for bait. Completely protected, these monsters are fun to catch and photograph if you are prepared with the gear and muscle needed to get one up to the surface.

Speaking of Sharks, one thing besides cool days that can put a damper your Tarpon fishing trip bite is the huge aggressive Bull Sharks that are becoming more common in the Keys. These Sharks are quick to eat any kind of bait thrown their way, and as numerous YouTube videos prove, they are an extreme menace to hooked Silver Kings. Sharks are a prominent source of injury to caught fish during human interactions with Tarpon, a valuable sportfish resource that is regulated as catch-and-release only.

Other notable Key West March fishing action is the great meat fishing found out on the reef edge and on the wrecks, where the spring Yellowtail Snapper bite gets hot and heavy. These fish move in big schools, and with a few Mutton Snapper, Mackerel, and even some Hogfish thrown in, fish boxes fill fast and happy fishermen go home with limits of nice fillet fish.

Whether you are tempted to get an introduction to Tarpon fishing, want to wrangle some huge sharks, or simply savor some brisk light tackle Snapper fishing, Key West is the place to be in spring. But as prime Tarpon season moves closer, boats and captains book up quickly and lodging get hard to find. That’s why now is an ideal time to make your move on an unforgettable Key West charter fishing safari. Use the secure Fish Key West eTicketing system to make all your arrangements right now!