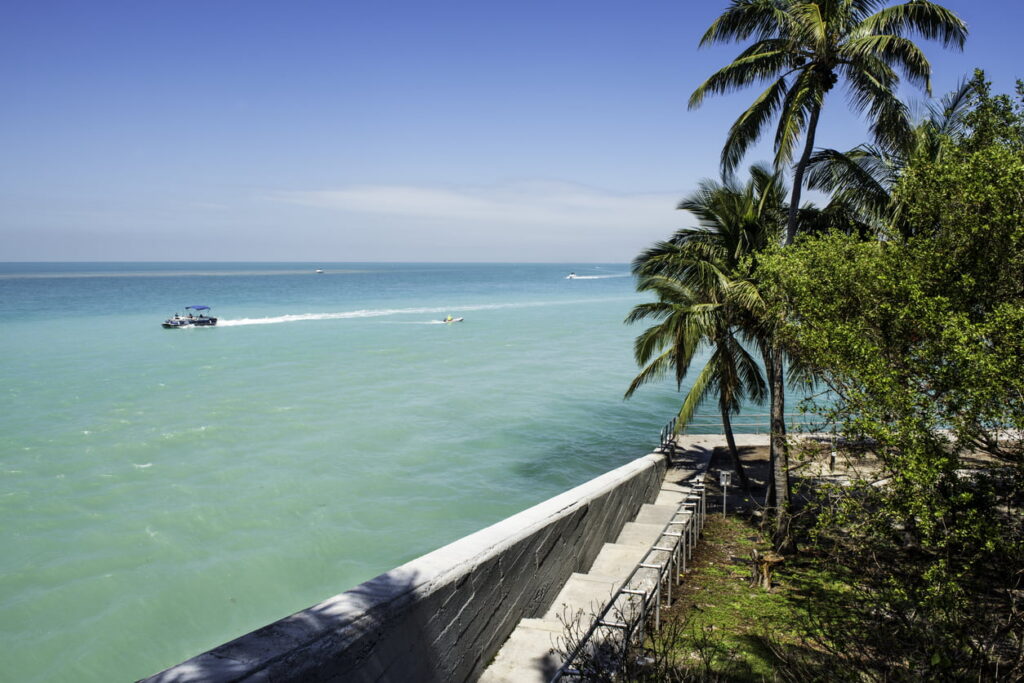 The Key West shallow water Flats fishing has turned on in a big way since the Christmas holidays. Between this and the steady deep sea action we have seen the past few weeks, it has really been a Happy New Year for Key West fishing.

When we get into the mid-winter flow of cold fronts passing through about every 8-10 days, the water gets stirred up and cooled down more and more with each one. This drives large schools of ballyhoo and other baitfish in from offshore. They accumulate just outside the reef, where they attract the attention of open-ocean gamefish. Then, when the swarms of bait make it through the reef and into the warm shallows of the Backcountry Flats, the inshore predators go into feeding mode. It sets up a broad range of good fishing possibilities for Key West winter fishermen.

The Flats are giving Permit fishermen the time of their lives this January with plenty of shots at tailing fish running up to about 30lbs. There is enough light wind to keep a bit of chop on the water and provide some camouflage for stalking anglers. And while crabs are scarce right now, the Permit hit buck tail jigs pretty readily. There are also a few Bonefish around, but the real January Key West Flats fishing story besides Permit has been the monster Barracuda that can be spotted lying soaking up the sun in the shallow water over sand holes or near the lighter-colored grass patches. Tube lures, streamer flies, or anything shiny pulled past these fish at maximum speed results in blasting top-water strikes and runs that have the drags smoking.

Guides can also find Barracuda in the channels along the Backcountry mangrove islands, where the fish lurk between the mangrove roots ready to ambush passing baitfish. Barracuda are found around this type of structure any time of year, but the Cuda fishing really gets good once the cooler water temperatures of winter hit offshore and push the big bait schools into the warmer shallows. The warm winter Backcountry waters also spark exceptional Shark fishing, and it is going strong as we hit the second week of January.

Blacktip, Bull, Lemon and occasional Hammerhead Sharks patrol the Backcountry channels and basins. Warm water makes these Sharks very aggressive, and they are quick to home in on the thrashing and blood of hooked smaller fish like the Mangrove Snappers, Jacks, Ladyfish, Pompano, and Sea Trout that are so plentiful in the Backcountry. Once these big predators arrive at the party, it is difficult to get a hooked fish to the boat in one piece, so the best option might be just to pick up the heavier gear, put a bloody chunk of Barracuda or Ladyfish on, and do some Shark fishing.

The popularity of Shark fishing has been on the rise around Key West the last couple of years, and many fishermen who come down here looking for a fight end up tangling with a trophy-size Bull Shark, Hammerhead, and sometimes even a Tiger. All Shark fishing around Key West is catch-and-release to help protect these magnificent animals and preserve a great recreational fishery.

Offshore, the higher temperatures and steady east winds that come between cold fronts set up an almost summer-like pattern that can be great for the deep sea boats. When that happens the Mahi-Mahi fishing can be phenomenal even though it is technically not the prime season for these fish.

Great catches of Mahi, with some fish of 20 lbs. and larger, along with steady multi-species action on Sailfish, Kingfish, Wahoo, Mutton Snapper, Blackfin Tuna, and Bonito have resulted in a lot of impressive mixed-bag stringers hung up on the docks by returning offshore fishermen. The Gulf Steam has pulled in close, and almost all of the classic pelagic sport fish can be found feeding just a short run out beyond the reef, making for less run time and extra fishing time, so that equals big catches.

January 1st marks the start of a new round of competition in the Key West Fishing Tournament, a favorite with locals and visiting fishermen alike since 1965. This fun tournament encourages sportsmanship and the love of fishing in everyone young and old. In recent years, the eight-month-long event has been scheduled to kick off in January and end August 31st. This gives anyone who wants to participate plenty of opportunities to get involved.

The rules are simple: All entries must be fish caught while fishing in public waters in the Florida Keys west of the Seven Mile Bridge. Anglers target 44 different gamefish species with fly, spin, and conventional tackle in nine line-weight classes ranging from 8 to over 50 lb. test. Charter captains are required to register their boats in order for their anglers to participate. Private boats and shore anglers are not required to register.

Entry is free – Fishermen need only to have their catch weighed and certified by the official weigh master at one of the tournament weigh stations, then fill out an entry form and mail it to the KWFT or deposit in one of the entry drop boxes found at local marinas. Every year, more than 2,000 anglers commemorate their catches with “Outstanding Angling Achievement” citations, or receive “Sportsmanship Award” citations for released catches. Trophies are awarded to leaders in each division: Men’s, Women’s, Junior, and PeeWee, as well as for Master Angler, Heaviest Fish of each species, and Most Releases of fish from 7 different species.

This event is a nice bonus on top of the great winter fishing that is coming up here in Key West. If you have ever wished for the chance to participate in a fun, flexible, family-friendly fishing competition, the Key West Fishing Tournament is for you. Make plans to get down here, get your Key West fishing charter booked on Fish Key West, and get in the game with some of the world’s best saltwater sport fishing.