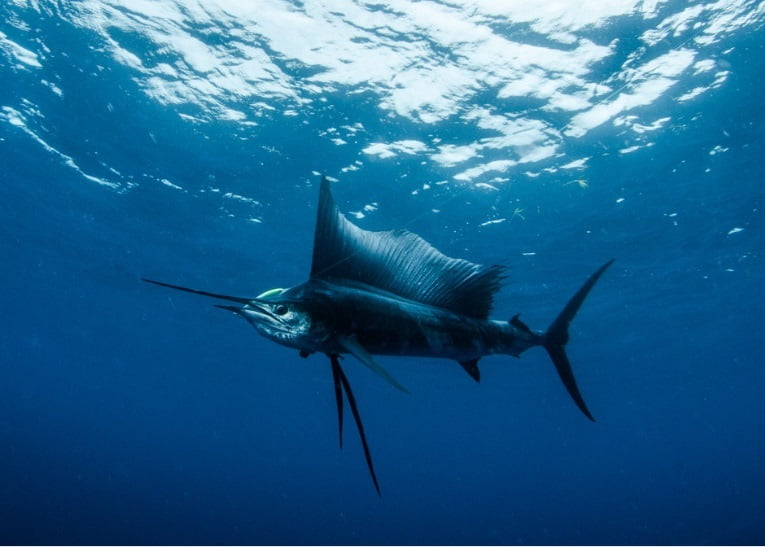 March can get cool in the Keys, with temperatures in the low 60s not unheard of, particularly during the early part of the month. Typical March weather brings a series of cold fronts rolling through the Lower Keys. Cool air alternates with unseasonably warm weather to keep the fishing a bit unsettled.

If you like excitement in town and a party atmosphere to go with your fishing, March is a good month to visit Key West. College spring break season gets into gear by mid-month and the bars are hopping. This fishing can be excellent as we stand on the break point between winter and spring out on the water.

Air temperatures have a significant effect on the shallow waters of the Key West Flats. Tarpon in particular avoid the cool weather by moving farther offshore. On warmer days, they move back inshore and can be seen rolling sporadically off the shores of Key West. On the Flats, a few Permit are boated on the warm days between cold spells but the classic Flats fishing does not really take off until a solid warm-up comes in.

Luckily, there are plenty of other fishing opportunities to keep the action hot even when the weather is not. Backcountry Redfish are often taken on flies in the shallow water during cool, windy conditions. The Barracuda, Jacks, and Lemon Sharks are also cooperative when it comes to hitting either artificials or live bait. The Mangrove Snappers also do not mind the weather, and plenty of them go home for dinner with happy Key West charter boat guests.

The reef fishing is on this month as well, and the Yellow Tail Snapper are biting, and running at pretty decent size to boot. The wrecks are producing some good Amberjack fishing and the occasional Sailfish or Wahoo. A few Grouper are being caught and released in a preview to the start of the Grouper season in May. Meanwhile, the Fish Key West charter captains are eagerly looking for the Sailfishing to heat up in April and hoping for a repeat of the spectacular action seen last year.

As the days get longer, fishermen can grab the chance to enjoy an evening fishing charter. Evening trips benefit from reduced boat traffic and fishing pressure along with spectacular Key West Sunset views produced by the early spring evening skies. Another great springtime adventure is the run out to the Gulf shrimp boats.

It is a long 50-mile run out, but fortunate anglers get to experience the wild fishing that occurs when the shrimp boats dump their nightly by-catch of small fish and crabs overboard at first light. When hundreds of Bonita, Cobia, Sharks, and Tuna go into a feeding frenzy and hit anything thrown at them, fishermen soon forget the time spent on the run out. Besides constantly fighting Bonito, fishermen bag Blackfin Tuna and many Sharks on these trips before returning home with sore arms and happy grins.

Catch the Tail of the Keys Sailfish Migration

Springtime in Key West brings one of the last big Sailfish bites of the season. The fish move down the Keys on the southward leg of their migration route, and professional Sailfishing tournament teams follow them for a last shot before the fish populations split up to head out to the Bahamas or down to Mexican and Central American waters.

For bait, the threadfin and cigar minnows are plentiful around the range and channel markers off Key West, and ballyhoo can be caught over the shallow reefs and ledges on both sides of the island. This live bait works well along the outside edge of the reef because the Sailfish hunt bait schools that are pushed up against the reef by the fast eastbound currents feeding the Gulf Stream. One reef hot spot is directly to the southeast of Key West off Boca Chica Key over the Sambo reef system. There is a double reef line out there with a 80-90-foot trough in between that traps bait and draws Sailfish.

The ideal setups around Key West make it possible to track down big hunting packs that can number in the dozens of Sailfish. Trolling live baits under kites or spotting fish on the surface and casting right into them produces hundreds of hook-ups every season. This is why the Sailfish grounds of Key West easily compare to the more exotic and far-flung tropical billfishing meccas.

The Florida Keys are a fisherman’s paradise, and springtime in Key West brings it all together to offer fishing that will make you never want to leave the Keys. You can run offshore for Sailfish or get into big schools of Tuna, lots of Mahi-Mahi, packs of Wahoo, and incredible patch- and deep-reef fishing.

There is almost too much fishing to choose from, and on the days when a cold front rolls through, Key West has enough sights, sounds, and historic attractions to keep you busy for weeks. Beat the crowds with an early spring Key West fishing trip. Fish Key West makes booking a snap.