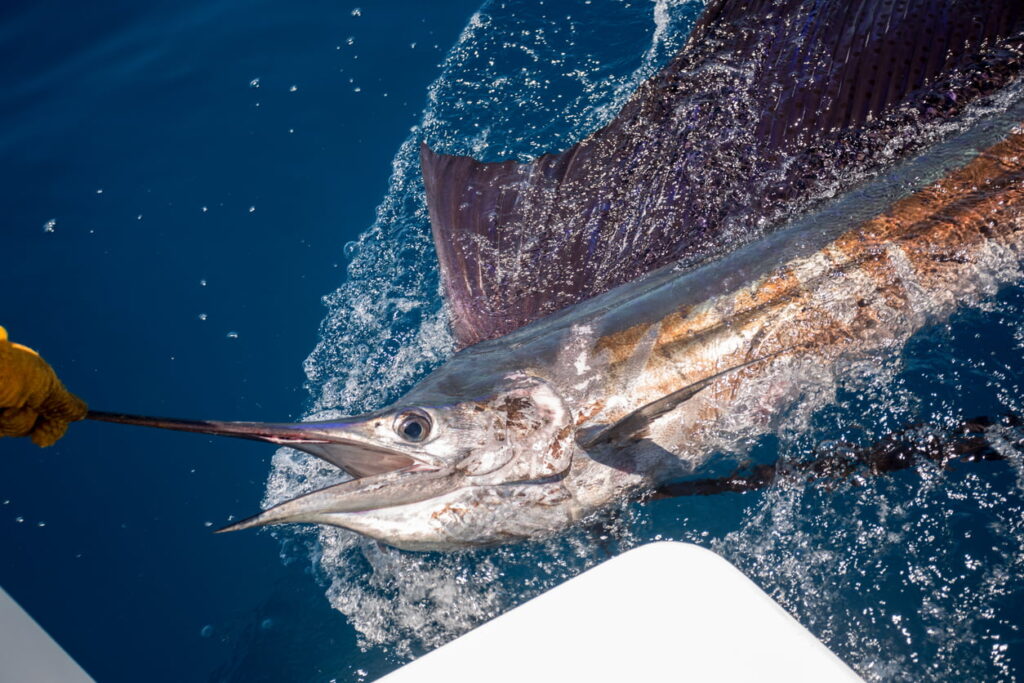 You know what they say about April showers? The offshore bluewater fishing grounds may be short on flowers, but the early part of April often seems to be payback time for all the good weather we enjoy over the winter down here in Key West. Almost every year the March and April weather charts show the same thing – A very regular swing from a few days in the lower 80s to a few down in the mid to upper 70s and then back.

When the big winter high pressure systems begin to break down and the spring transition hits, up north you get the raw, windy March weather with a few good shots of snow left but also some nice blue-sky days mixed in. These final cold fronts roll south and go through here as mild cool fronts about once every 6-8 days from Mid-March on. This pattern does not seem to break until we get a good 2-week plus stretch of 80-degree weather.

The fishing seems to back off for a couple of days after each front until the wind settles back down to calm or breezy out of the southeast. Then the fish are hungry and chasing bait disoriented by the shifting winds and water temps.

Springtime Sailfish on the Swells

As the windy weather of March slacks off, the offshore waters start producing Sailfish. Although Atlantic Sailfish can be found in a huge area of the ocean, they favor areas near the Gulf Stream and congregate in the warm waters just offshore from the continent, out to the continental shelf and over seamounts.

Sailfish migrations are directly linked to changes in water temperature, and in the Atlantic waters off Key West, Sailfish go by heading north in April and May and are on their way back south in September and October. In fact, Key West is far enough south that the first waves of north-bound migrating fish sometimes show up in December and January, with fishing getting better into spring.

Sailfish often work together in groups to hunt baitfish near the surface. With the winds out of the east blowing against the east-bound Gulf Stream current and pushing up swells, the big fish can be seen moving on the surface, cruising down the faces of the waves with the tops of their tails showing out of the water. This tailing behavior makes it easy to spot fish and cast bait to them, and the action can be hot and heavy for those willing to brave a bit of a sporty ride in the swells.

Along with good numbers of Sailfish, large schools of Mahi-Mahi are around this month. It looks like the setup is coming on for some solid deep sea fishing into May, with the wind and current bringing the color change on the edge of the Gulfstream in next to the reef and a lot of bait drawing in everything from the Mahi-Mahi to Wahoo and Marlin. Big schools of Blackfin, Bonito, and Skipjack Tuna along with Cobia and Sharks will keep the action fast whether you are fishing live bait or trolling.

Out on the reef this time of year, the wind and current stirs things up and the fish look to feed. Cut baits fished on the bottom bring the Yellowtail Snapper on board, and the Mutton Snapper are active now as well, making for some good dinner table fishing. When conditions were not ideal offshore on the main reef, it’s possible to hit the patch reefs and rock piles closer in to get Mangrove Snapper, Muttons, and Grouper. The Grouper are still catch-and-release because the season in the Atlantic does not open until May 1st.

The Backcountry is another good place to hide out from the wind and pick up a few Sea Trout or tangle with some big Jacks to keep the rods bent. And of course the Sharks and Barracuda are always around there and on the lookout for an easy meal.

Warm-Water Species are Moving In

In the warming spells between fronts, the Tarpon, Permit, and even a few Bonefish are coming back onto the Flats ready to eat if presented with the right opportunity. The Tarpon appear in ever-growing numbers as the migration picks up, and when the air and water temperatures, atmospheric pressure and all the other stars align, the Silver Kings are more than willing to hit an accurately placed fly or drifted artificial bait.

Although Permit are said to hang out on the wrecks to spawn in April, some Key West Flats fishing guides have been able to put their clients on the fish when everything goes well. And anglers ready to go after Permit by drifting a live crab over the wrecks and patch reefs west of the island are often rewarded with some big fish.

Besides the good fishing, April brings a lot of fun activity to Key West as the summer fishing tournament season heats up. Visitors can take part in tournaments, and the weigh-ins are exciting and free to enjoy.

The first weekend in April is traditionally the kickoff weekend for the annual Key West Fishing Tournament. Held since 1965, this tournament is an 8-month-long competition running from January 1st to August 31st. It is open to the public and fishing can be done from a boat, bridge, or the shore.

There is no charge to enter and there are classes and age groups for every type of angler. Visiting and resident anglers simply fish with a registered captain and enter their weighed and released catches to compete for awards. All entries receive a certificate noting their catches and releases.

Never fished in a tournament? Why not visit Key West this spring and join in the fun? Find all the information you need to book the best Key West fishing charters on Fish Key West.